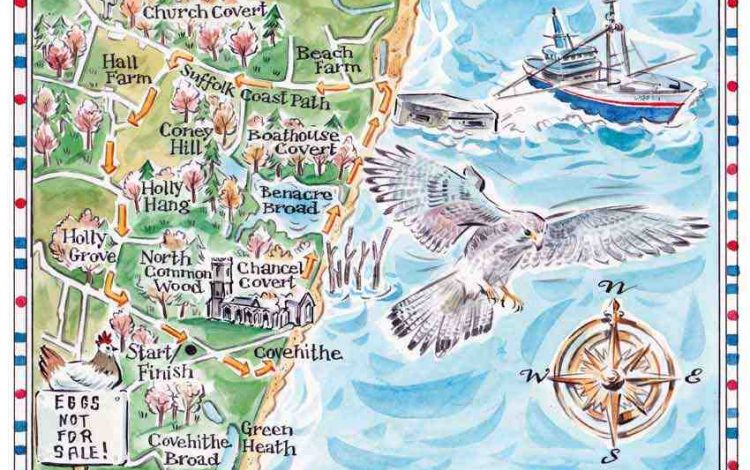 This is a walk on land that will soon disappear. Hurry, hurry, hurry, while stocks last, as sale adverts say. When it’s gone, it’s gone.

Covehithe, on the Suffolk coast, has gained renown as a place of loss. The North Sea is a perpetual orangey brown here, because of the gulps of sandy soil it takes from the land – up to 20 yards during a single winter storm.

The sea sabotages the tidy, owner-occupied countryside and imposes dereliction on it. Land crumbles away. Houses, too. Old water pipes poke from the cliff. The road disappears into brambles and oblivion.

We can’t really cope with this ruination; Covehithe bristled with flustered signs of instruction. Danger! No entry! No access to the beach here! Park considerately! This bin is for dog waste only!

Perhaps a broken, derelict landscape causes people to behave wildly. Or perhaps there were simply a lot of visitors. Even slow-motion disasters attract rubberneckers.

When I came to Covehithe a few years ago, I joined two cars parked by its magnificent 15th-century flint church (also ruined, but deliberately so – abandoned by parishioners 200 years ago because its upkeep costs were ruinously high). Now this remote hamlet has been comprehensively discovered in an era where walking (‘HANDS, FACE, SPACE … WALK!’) is almost the only state-sanctioned activity permitted.

This autumn, on a quiet midweek day, I parked alongside 35 cars, ignored the signs and paraded along the crumbling cliffs until I found a section that bowed and scraped before the waves and allowed me onto the beach.

The sea was an unsettling gold hue, and looked too close to the land; water infringed on the earth’s personal space.

I walked north towards a distant wood of silver birches. Drawing closer, I saw it was actually a beach of leafless trees, their trunks turned silver by the waves. Wooden limbs jutting from the sand looked like whale bones – or a sculpture park – throwing themselves in interesting directions. This was the attraction: people picnicked among the sea-slaughtered sycamore and oak.

The newly-hewn cliffs revealed the soil of the former wood in cross-section, like a drawing from a Ladybird book. There were no signs of earthworms or badger tunnels but the pitiful shallowness of the trees’ roots was revealed; they rarely stretched more than a yard into the soil.

Beyond Benacre Broad, once a wooded lake and soon to be a North Sea bay, a pillbox from the Second World War had collapsed onto the beach. Two slits showed, like eyes, but the rest of its face was masked by the water. The waves, crashing over it, gave it a fleeting hairstyle of white foam.

I turned inland and took a lane back south, shielded by thick woods as if the coast was miles away. I had a green woodpecker, a buzzard, a kestrel and just one passing car for company. Best of all, I met the ancient stump of an oak tree like an outstretched hand, with a young holly tree growing in its palm, suspended three yards up.

Given the absence of walkers here, it was weird to find a forest of signs, repeatedly instructing me that every field entrance was private and I must keep out. As my irritation rose, I was cheered by the most spectacularly tetchy sign.

‘EGGS NOT FOR SALE’ it shouted. ‘We no longer sell seriously fresh eggs from the drive, as people have been taking them without paying. Instead we are feeding them to our dogs!! To those of you who have been honest, thank you – to those of you have been dishonest, you know what you can do.’

Were the sign-makers so angry because, ultimately, the sea was the authority here? The sea was taking the earth we convinced ourselves we could own. Like the land itself, these signs would soon be washed away.

This is a lovely five-mile circular walk. Be good and follow the signs to the beach. Check tide times – the beach walk is possible only at low tide. OS Explorer Map 231 Southwold & Bungay