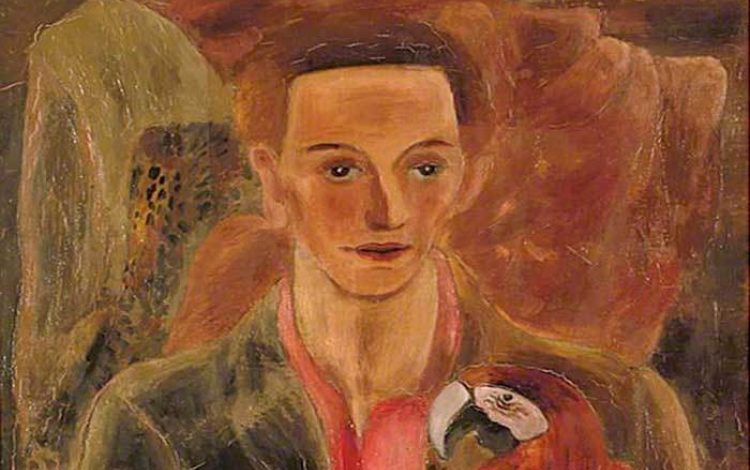 Hugh St Clair's new biography of Cedric Morris and Arthur Lett-Haines – A Lesson in Art and Life – is published this week. Maggi Hambling speaks about the great painter to Andrew Lambirth

I interviewed Maggi Hambling in her south London studio, surrounded by intense paintings and heaps of cigarette butts, and she at once began to talk of the projects currently occupying her. This month, at the Jerwood Gallery in Hastings, there’s a group show of work by Hambling, Sebastian Horsley, Sarah Lucas, Julian Simmons and Juergen Teller.

‘In the big space will be what you might call the interactive work,’ explains Hambling, ‘like my two portraits of Sarah and her portrait of me, which is a sculpture, called Magi rather than Maggi.’

I wonder if there’s any reference to Eliot’s Journey of the Magi, but don’t get the chance to ask, as Hambling is for the moment unstoppable, determined to give me a proper account of this unusual show of work by friends.

‘When Julian, Sarah’s partner, came to my studio to sit for his portrait, he was constantly looking at this painting, Tsunami Whirlpool (2013); so I made his portrait into a diptych. He is doing one of his great big round drawings of me.’

She shows me photographs of four of her recent drawings of the photographer Teller – the best was drawn while he was photographing her, his features obscured by his camera. ‘He took a lot of photographs of me that morning, so he’s making a collage or something… Then I’m showing these posthumous portraits of Sebastian Horsley, who died in 2010. They’ve never been shown before.’

Horsley, artist and dandy, died at 47, in 2010, of a drug overdose [see Gyles Brandreth’s Diary, page 36]. He introduced Hambling to Lucas at the Colony Club in Soho. Hambling was his friend, and this long series of portraits, in some of which the skull grins out from beneath the flesh, was a way of coming to terms with his death.

‘In the other gallery at the Jerwood will be self-portraits, and the film that Sarah made of Sebastian being crucified. That will be his self-portrait.’

Hambling and Lucas share a birthday. Hambling turns 73 on 23rd October, and Lucas will be 56. When the younger artist came to live nearby in Hambling’s native Suffolk, they became close. Later, Teller also became a friend, through Lucas. The Jerwood exhibition is a meeting place of painting, drawing, film, photography and sculpture, and promises to be thought-provoking, to say the least.

A concurrent show, at Hambling’s dealer, Marlborough Fine Art, opens on her birthday. This will consist of a large self-portrait (executed in a similar style to her celebrated 2016-7 portrait of Leonard Cohen) and a group of smaller imaginary portraits, mostly from this year. Subjects range from Greta Garbo and Donald Trump to more abstracted images such as Terror (which looks like a Ku Klux Klansman), Head with Ghosts, The Widow, Ageing Rockstar, Politician or Valkyrie. ‘These are from the imagination and are quite visceral, as you can see,’ she says.

When I say that their lack of clear features may render them somewhat obscure to the uninitiated viewer, Hambling ripostes tartly, ‘I would have thought to anyone at all these little paintings register as heads. And then, art is for people to find in it whatever they find – which is part of the whole point as far as I’m concerned. The titles are mere suggestions. Take Head with Ghosts. I’m sure you can see two figures quite clearly in it, can’t you?’ I assent. ‘I hope they feel real, but are the opposite of any kind of realism, particularly that unspeakable photo-realism. I’ve thrown out [of this exhibition] ones that haven’t just happened on the canvas, with the paint taking me where it will. These all painted themselves.’

Hambling sees her role as an artist as a conduit for different kinds of emotional energy, channelled through her onto the paper or canvas. The result is marvellously direct, gutsy, flamboyant, painterly images, each one a little bit of herself, as well as comprising a pantheon of contemporary heroes and villains, of types and individuals. These are not portrait likenesses but elemental presences, to do with feeling, which Hambling considers the most important aspect of art, ‘as opposed to a lot of the fairground stuff one notices around the place’.

She became an artist as a teenager at Benton End, the private art school in Suffolk run by Sir Cedric Morris and his partner, Lett-Haines. I ask her about the current revival of interest in Morris’s work.

‘Lett, who spent so much of his life promoting Cedric, would have been delighted, but Cedric would have giggled,’ she says. ‘As they brought me up to mistrust dealers of any kind, regarding them all as crooks and shits, I think that it’s rather ironic. I’m still hoping to put on a show of Lett’s work, because that’s never been done. And he deserves a bit of attention.

‘I was very much a Lett person at Benton End, having realised that the Cedric people all tried to paint like Cedric, whereas Lett encouraged each person to discover their own vision. I think that’s what teaching is about.’

Hambling’s principal subject is people. She does paint the sea, but it’s an inhabited place, in which spectators spot the lineaments of all sorts of beasts and people emerging from the waves.

‘I don’t mind that at all – I don’t deliver instructions – people discover these things in the paintings and that’s great. I try to paint the energy of the wave breaking and, with these portraits, to translate the spirit of the person into paint. Recently, I’ve tried to paint self-portraits of me drawing. I don’t know what I look like drawing – but I paint what it feels like.’

Asked whether she thinks her work is changing, she replies, ‘I sometimes look at the very first oil painting I did, of a swan, which I painted for my mother. She actually called it a “swoose”, as she thought it looked half like a goose. But when I look at the way the paint went on in that tiny painting, it’s very close to the way the paint goes on now, though in a slightly more ordered way. I don’t like the word “change”. One thing has always led to another in my work, and I’ve always responded to what happens in life. If somebody very close to me dies, I go on painting them – that sort of thing.’

Is the whole process of making art as urgent now as it was when she was 30?

‘More urgent! Although I gave up maths when I was 11, when I reached 50, I knew it was half a hundred, so I felt halfway there and that was fine. Sixty was more of a problem – that’s when I bought a Bentley. I had to do something, as even I knew I was in the second half. But the fact of the matter is that I’m going to be 73 this year. So there’s less and less time, and I’m up at five every morning in summer and six in winter and go straight to the studio; otherwise I would be pottier than I am. That discipline is the only way I know how to live. When I’m in the studio, life is real; outside the studio it’s one big charade.’

A dance with my grandfather

The sublime beauty of wrecked England

This story was from November Issue issue. Subscribe Now