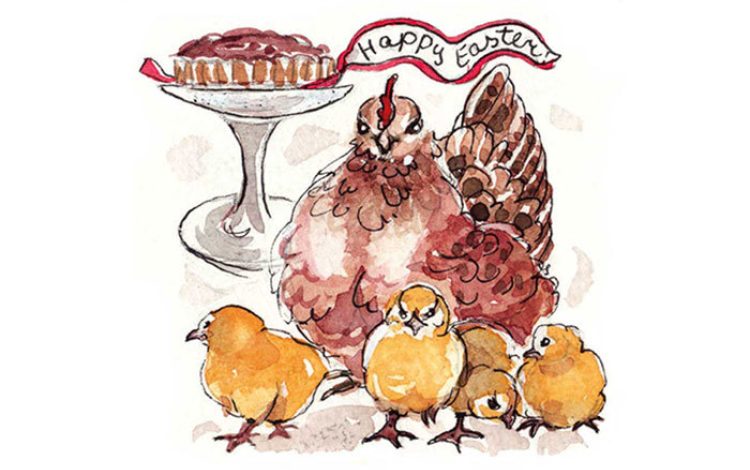 Indulgence in sweet things at seminal moments in the church calendar had a practical purpose. Sweetness is memorable. It’s no accident that the key to remembrance of things past was a sugary morsel of cake. Pagan rites of spring designed to restore fecundity to the Earth fitted so neatly into the Christian festival of Resurrection that it resulted in a culinary emphasis at Easter on fertility, through the consumption of eggs, nuts, lambs and the first green shoots of spring.

The proper time to bake an Easter simnel is Mothering Sunday – 31st March this year – which was when young women in service were permitted to raid their employer’s larder for the makings of rich fruitcake to take home to mother. Here’s a lighter version, baked in a tart case from the land of Bonnie Prince Charlie. Onwards and upwards.

This is – or was in the 1980s, when I was writing recipes for the Scotsman – the most popular item on the tea-trolley at the But ’n’ Ben to the north of Arbroath. Proprietor Margaret Horne could offer no information on the origin of the name, but it’s delicious. Serves 6-8.

First make the pastry: mix the flour and sugar, grate in the butter, fork the yolk with its own volume of water and use it to press together the flour-and-butter mixture (or use a food processor). Don’t overwork it. Cover with clingfilm and leave to rest while you make the filling.

Bring the currants to the boil with the orange in a small pan. Stir in the sugar, cinnamon and slaked cornflour and simmer for a few minutes over a gentle heat till the liquid thickens. Leave to cool while you make the cake-topping.

Beat the butter with the sugar until light and fluffy. Beat in the eggs one by one (you may need a little flour to stop the mixture splitting), and then fold in rest of the flour. Loosen with milk till the mixture to drops easily from the spoon.

Preheat the oven to 400F/200C/gas 6. Pat or roll out the pastry to line a 24cm tart tin. Use a wet finger to seal any cracks. Spread the currant mixture over the pastry and spoon on the cake-mix. Bake for 45-50 minutes, until the pastry is crisp and the cake well-risen and firm to the finger. Leave to cool before unmoulding from the tin. Ice with 250g sieved icing sugar mixed with a spoonful of cinnamon and about four tablespoons of orange juice.

Apologies for mixing up grapes with papaya/green apple in the salsa recipe (March issue), but any of these fruits will work.