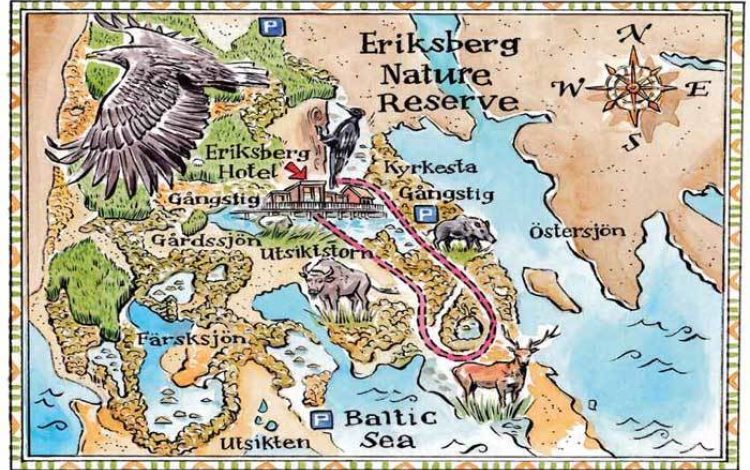 At first glance, the wild forest and mossy granite boulders on the southern coast are an everyday Swedish idyll.

The trees here are mostly deciduous – oak, hawthorn, hornbeam and birch – and the air is damp and sweet. Every now and again, glimpses of the cobalt-blue Baltic swim into view.

A second glance at the forest floor, however, reveals it to be unusually well-trodden. There are hoofprints from a variety of large feet all over. And grassy glades are not gently grazed; they are lightly ploughed.

Five hundred yards into my walk, Per-Arne Olsson, the managing director of the nature reserve and hotel at Eriksberg, raises a hand. It takes me a moment to spot them in the dappled shade: a hulking wild boar, followed by nine piglets with coats like mint humbugs.

The boar are thrilling but still relatively normal in quieter Swedish woodlands. After cresting a hill, however, I spy an abnormal beast on the boggy pasture below. Shaggy, enormous and looking like a relic from the ice age, there stands a huge bison. It gazes evenly back at us before plodding off.

Swedes must chuckle if they witness our heated debates about ‘rewilding’, a vision of returning land to something closer to its ‘natural’ state. This concept was coined by an American conservationist in the 1980s. The Swedes got here long ago.

In 1938, a bird-loving taxidermist, writer and visionary called Bengt Berg bought the Eriksberg estate. The land had been intensively farmed and mined for black granite but Berg returned it to wild plants and animals.

We climb another low hill to meet the sea breeze which causes junipers to dispel yellow clouds of pollen. It seems unimaginable that within living memory this ancient-looking forest was farmland. The only clue is the ruined stone walls snaking through the forest. Dead trees and dead wood are scattered everywhere – heaven for Eriksberg’s five woodpecker species. They include the ultimate prize for any British birder: the black woodpecker, a magnificent brooding Nazgûl of the forest.

Today, 20 miles of fence encloses the reserve. As at the much more recently rewilded Knepp Estate in Sussex, Eriksberg grazes its forests with reintroduced herbivores – in this case, bison, red deer, fallow deer and a few Père David’s deer (a Chinese species which is extinct in the wild).

Their rootling keeps the land from becoming totally overgrown while, crucially, water levels in the valleys have been raised to create marshes. Berg saved wild goose species from extinction in Sweden: Eriksberg had just two barnacle geese in his day; today there are 500 and a profusion of waders – redshank, curlew and oystercatchers. Despite plentiful predators – mink, stoats, weasels, otters, badgers, foxes, buzzards, kites and the occasional lynx that jumps in and out of the fenced area – there is so much good habitat that these birds are thriving.

I don’t see Eriksberg’s apex predator until we are nearly back at Berg’s former Swedish farm – now a luxurious eco-retreat, with glamping as well as lavish accommodation and fine dining in the converted barns. There’s a distant ‘mew’: high above a lake adorned by six species of water lily flies an enormous creature with wings as broad as a scaffolder’s planks – a white-tailed eagle.

Occasionally bigger beasts drop in: Eriksberg’s lakeside retreat with reinforced glass and concealed helicopter pad is rumoured to have been visited by Barack Obama. Visitors are treated extremely well – but then so are the wild animals. As Olsson puts it, ‘We are in the cage and the animals can come and look at us. If they want to show, they show. If they want to go away, they go away.’

My return to Poundland - AN Wilson