Farewell to the Sound of Silence – Anne Robinson 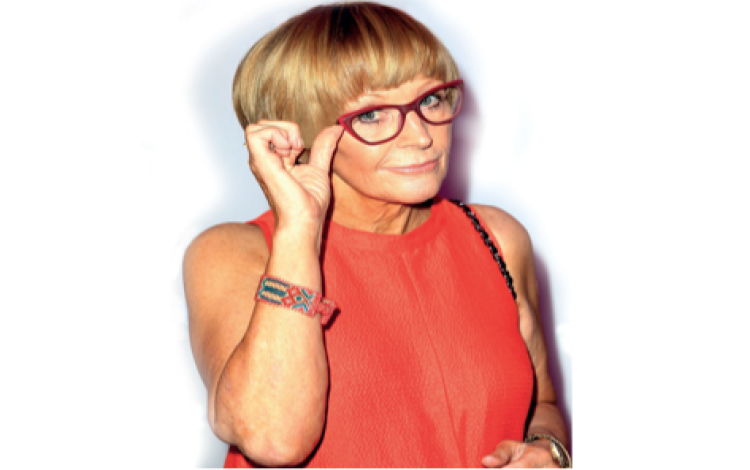 Anne Robinson had hearing problems in TV studios and restaurants for years. And then she discovered a Danish, tailored hearing aid

Every couple of months when we were small, my brother and I were taken to pay a Sunday morning visit to our paternal grandmother. Grandma Robinson lived in a gloomy, semi-detached Edwardian villa in Birkdale, Lancashire, along with her friend Mrs Joyce, another widow.

These outings promised only three hours or so of mind-numbing boredom. Luckily, the visits followed an almost identical pattern; so my brother and I survived by counting off the predictable milestones.

First, on the journey our scary mother, in the front of the car, would move her shoulders around as she attempted to compose herself and present an air of benign indifference to her mother-in-law. We wouldn’t have dared say so, but her personal best never rose much above manageable dislike. No matter, it was our first tick.

Grandma Robinson would be in bed and we rarely heard her voice. Instead, she would mouth her words – which was odd, since the only deaf person in the room was Grandma Robinson. Of this there was no doubt. A beige plastic box sat on her chest with wires reaching up to her ears. After a while, she’d fiddle crossly with the dial, and the box would crackle and wheeze as if receiving a shortwave radio transmission from darkest Africa. Tick!

Next she would call my brother and I up to her bedside to give us each a ten-shilling note. Tick!

Meanwhile, Mrs Joyce would produce tea, and any number of desultory conversations about health, doctors, pills and forthcoming funerals would follow.

Finally, Grandma Robinson, for the umpteenth time, would remind my mother of an article she’d read in the News of the World about a monk at my brother’s prep school who’d been charged with indecent assault. Oh joy! Tick! Tick!

Seconds later, my mother would stand up and say it was time to go. Tick!

Then, as we drove away and back to her scary self, she’d announce, with us mouthing the words in the back of the car, ‘Deafness is a weakness in your father’s family. You need to be careful.’

I had no idea then, or now, how to avoid becoming deaf. Any more than I know what to do when you see a sign saying ‘Weak Bridge’ just before you drive over it.

It was more than fifty years later, around the turn of the millennium, before I first began to wonder if my mother might have had a point.

I was at a press junket at the old Commonwealth Institute – a structure with enough problems in its forty-year history to merit its own Rogue Builders series. I was a Times columnist and had been placed for dinner between the paper’s gamine and beautiful fashion editor and the editor.

The fashion editor and I, as I recall, had two prolonged conversations, both on subjects dear to my heart: one about washing cashmere sweaters and the other about what best Mrs Camilla Parker Bowles could do with her hair. The editor of the Times possibly discussed world affairs with me.

I did nothing but nod and smile. I could hear only mumbling. I came away dismayed, except for briefly thinking that a lot of not very bright women do no more than nod and smile at dinner when men are chatting and end up with very rich husbands.

Several people assured me that the Commonwealth Institute had notoriously bad acoustics. But surely not that bad?

Also, I began to notice that more and more London restaurants seem to have the sort of poor soundproofing that made conversations difficult if not impossible. Meanwhile in television studios, ‘Can we have some quiet please?’ became my mantra, as chatter around me became seriously annoying.

Larry Lamb, the actor, who I bumped into at a literary festival, advised, ‘Get yourself to Specsavers in the Edgware Road. The young man, Mark, in charge of hearing, will sort you out.’

Not the sexiest of prospects. I did nothing.

Then, at a spring lunch in the Cotswolds the following year, in a room filled with raspberry corduroys, and shrieks of laughter, a woman put out her hand and said, ‘Ever been here before?’

Once or twice, I replied.

The game was up.

Young Mark from Specsavers offered a home visit. He arrived at 7.30 in the morning, said he had several care homes on his books and could test my hearing there and now.

Ignoring the care home bit, we sat at my kitchen table with his computer and a pair of earphones.

My right ear turned out to be exceptionally good ‘for my age’. The hearing in my left ear was very poor. It meant I could no longer unconsciously tune out other people’s chattering.

Young Mark returned a week later and unpacked a pair of beige hearing aids with plastic loops to keep them in place. With these, the sounds from my deaf ear would transmit to my good ear.

‘How will I know if the batteries need replacing?’ I asked Mark.

‘Easy,’ he said, ‘You’ll start to say, “Pardon.”’ He’s been stored in my iPhone as Mark Pardon ever since.

In theory, the aids did exactly what was promised. But here’s what I now know: losing your hearing in one or both ears promises a daily catalogue of indignities, only some of which are directly to do with being deaf.

Doubtless, hearing aids, of what I would call the old-fashioned kind, work perfectly well for people who have long hair, don’t wear specs, and are of a tidy and ordered mind.

I fail on all counts. Within a week, I’d lost one of them. It was nearly two grand for another. I failed to get the knack of removing my specs and not taking the devices with them. Worse, the batteries always ran out when I was in a hurry. At a dinner at Tate Modern to mark the opening of the 2012 Damien Hirst exhibition, I arrived late and the Director of Tate Britain at the time, Penny Curtis, offered me a quick tour while the rest of the guests were having pre-dinner drinks.

‘Oh, whoops,’ said Penny, as we stood in front of a glass installation, with dozens of live flies buzzing around, ‘You’ve got a bit of yellow confetti in your hair.’ I swept a small, bright, yellow piece of paper off the top of my head and thanked her. Deciding not to mention that it was the sticky-backed cover from the battery I’d just replaced.

Ever in hope of finding my deafness was curable, I saw a consultant. The hairs in my left ear had flattened and couldn’t be revived, he reported.

My saviour came in the shape of the dashing fashion designer, Rupert Lycett Green, who one day produced a bright, red ball from each of his ears. He was wireless! What’s more, he’d had them fitted for no greater price than I’d paid Mark Pardon.

Next stop, Pindrop, an audiology practice in Harley Street.

‘I want two big red balls like my friend Rupert,’ I told Rony Ganguly, the audiologist. He shook his head and said big red balls were OK for men, but my ear canals were too tiny. I persisted. For television, I have a specially moulded earpiece. Why not for everyday?

It took the best part of another year before Rony came with up with a Danish device, especially tailored to fit my canals. It’s called an Oticon Alta Pro and much smaller than Rupert’s red balls.

The bright blue outer coating is useful for seeing if the device, two grand plus, is about to go into the dog’s mouth. Unfortunately, there’s no technology to train a scatterbrain to remember where she last put her hearing aid.

I’m on my fourth. It’s not perfect. I need to put on the subtitles for watching television. I hate crowded parties. I’m lobbying the Editor of The Oldie to let me review restaurants for the deaf. Half of London’s best I now avoid.

I’m not complaining. Hearing loss in one ear is preferable to two. I might still strain to catch the words of the quietly spoken. But hey, I’m good to go for another round with Mrs Ava Balfour.

Mugabe was a good leader – before he turned nasty

The misery of not being able to read