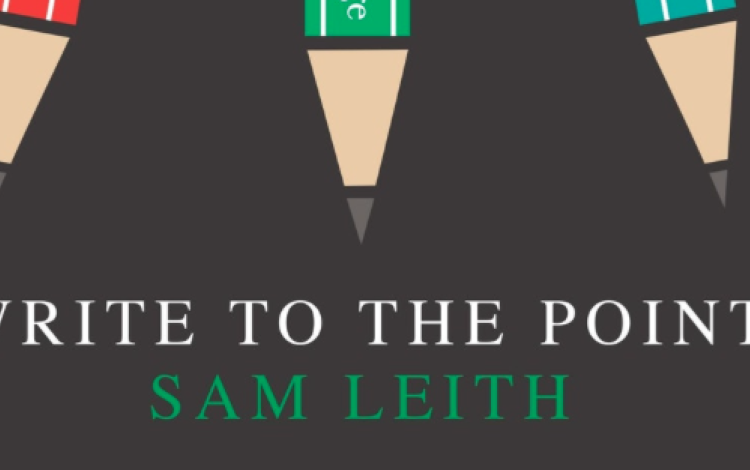 Write to the Point: How to be Clear Correct and Persuasive on the Page, by Sam Leith

Let's get right to the point. Style guides are generally wine and water but this one, as Dr Johnson said of his journalism, is pure wine.

You might think, being an oldie, that you don't need Sam Leith because you were born knowing about hanging participles and abstract nouns, but Leith does more than repeat the rules. Write to the Point might as easily be placed in the humour as the grammar section of a bookshop or alongside F R Leavis in Literary Criticism.

Take Leith’s analysis of the final line of Middlemarch, a complex-compound sentence in which George Eliot looks back at the life of Dorothea Brooke as a figure in the distant past: ‘The effect of her being on those around her was incalculably diffusive: for the growing good of the world is partly dependent on unhistoric acts; and that things are not so ill with you and me as they might have been is half owing to the number who lived faithfully a hidden life, and rest in unvisited tombs.’

There’s quite a thicket to fight through before we reach what Leith nicely calls the ‘dying fall’ of the last clause. ‘Her being’ is a gerund and should not be interpreted as a participle phrase meaning ‘her having been on those around her’, as if Dorothea had spent her life getting the neighbours to give her piggybacks. ‘Incalculably diffusive’ is a tad pompous, and ‘things are not so ill with you and me as they might have been’ is, by contrast, wispy and childlike. The pleasure of the sentence, explains Leith, comes from the rhythmic effect of the final clause, which he scans for us: ‘And REST in un VISited TOMBS: di DUM-diddy DUM-diddy DUM’. The rhythm is the same as a limerick: ‘That SIlly young MAN from BraZIL’ It’s about ending on a single stressed syllable. ‘If I seem to be making too subtle a point’, writes Leith, ‘try rereading that sentence aloud, substituting “and who rest in tombs nobody visits” for the last clause. It means exactly the same thing. And it does not fricking work.’

Giles Coren once berated the sub-editors of the Times for changing the words of a restaurant review so that, rather than ending with ‘wondering where to go for a nosh’, it read ‘wondering where to go for nosh’. Coren’s complaint was leaked on the internet, and has been further shared by Leith: ‘Dumbest, deafest, shittiest of all, you have removed the unstressed “a” so that the stress that should have fallen on “nosh” is lost, and my piece ends on an unstressed syllable… Can’t you hear that it is wrong? It’s not f***ing rocket science. It’s f***ing GCSE scansion. I have written 350 restaurant reviews for the Times and I have never ended on an unstressed syllable. F***. F***, f***, f***.’

We are alerted to the ‘rising pitch and emphasis’ of Coren’s train of thought and the cadence of his chorus of ‘f***s’.