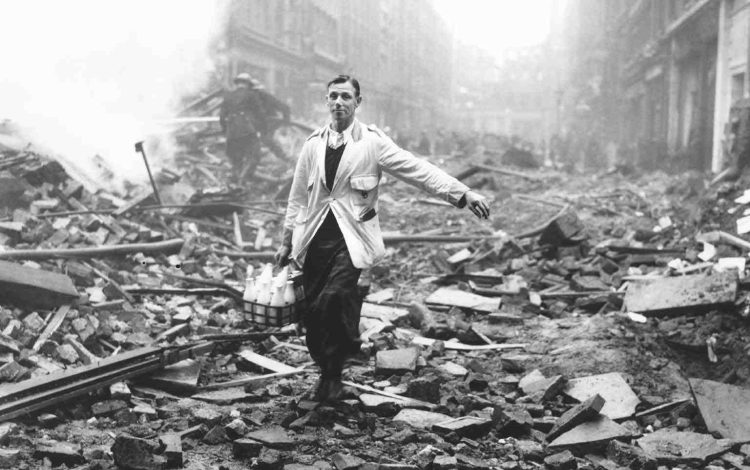 ‘The milk will get through’ – Holborn, London, 10th September 1940. Photograph by Fred Morley
View Full Size
1
of 1

Eighty years ago today, there was plenty of Blitz spirit, says Joshua Levine, as the Luftwaffe dropped 100,000 incendiary bombs on London in the Second Great Fire of London

Eighty years ago today, there was plenty of Blitz spirit, says Joshua Levine, as the Luftwaffe dropped 100,000 incendiary bombs on London in the Second Great Fire of London

When my family was quarantined recently, others happily did our shopping. But when I was locked inside our local park after dark, a middle-aged man refused – for social-distancing reasons – to stop to check I was all right as I tumbled feebly over a spiked gate.

We’ve all been seeing a lot of good and bad in one another recently – perhaps because government restrictions have granted us an ironic freedom to follow our instincts. Had it not been for social distancing, the man might have felt impelled to stay and help – because society expected him to. But the rules had changed.

Yet the same restricted freedoms were encouraging others to look beyond themselves. Selfless attitudes have been more evident across society than at any time since … well, since the Blitz.

How much can we really have in common now with then? In 1940, a human enemy brought us together. In 2020, a viral enemy keeps us apart.

But, as we reach the 80th anniversary of the start of the Blitz (which lasted from September 7, 1940, to May 11, 1941), one parallel holds true. Both can be seen as periods of unusual intensity that have jolted us out of our rhythms and driven us to unaccustomed behaviours. We have behaved well and we have behaved badly. Then, as now, life was complex and nuanced. It always is.

In 1940, Joan Varley was a young woman who spent her evenings studying at the London School of Economics (she later became a kingpin at Conservative Central Office).

One evening, she boarded a bus, climbed to the top deck and sat at the back. There was only one other person up there: a stranger, sitting at the front.

As the bus drove through Westminster, Joan heard a bomb falling. The bus driver must have heard it, too: he made a sharp right turn. Endless moments later, the bomb exploded elsewhere. But as it was falling, the stranger had walked down the bus, sat next to Joan and taken her hand.

‘Neither of us spoke a word,’ she remembers, ‘and once we were through the bomb area, he moved back to the front seat without a word being said.’

The story demonstrates the much fabled (and often doubted) Blitz spirit in its purest form. Bernard Kregor, an ARP messenger in east London, remembers life becoming much darker and more serious during the Blitz. That darkness, he says, amounted to a shared experience out of which rose real social unity.

But not everyone agrees. Bernard Kops was growing up five miles from Kregor. For him, the unity and communal spirit of the Blitz were little more than ‘forced humour’ in reaction to the fear and terror inspired by the bombing.

And some people refused to acknowledge any shared experience at all. Phyllis Warner, then a young teacher in London, remembers badges appearing on the streets saying, ‘I’m not interested in your bomb!’

But even as the Blitz was bringing some of the people together, so it was also encouraging them to break rules and exploit one another.

Opportunity was, after all, everywhere. Police were absent, lights were out and houses were opened up by bombs. Looting was widespread, and many ordinary, law-abiding citizens were turned into outlaws by the myriad new regulations that turned everyday activities (from turning lights on to owning a peregrine falcon) into punishable crimes. And sometimes the good and the bad behaviours could exist side by side.

Wally Thompson was a career criminal who described the Blitz as a golden time for lawbreakers. One night, during a heavy raid, he parked a stolen van outside a warehouse in London Bridge. With him was his gang of three accomplices – Batesey, Bob and ‘Spider’ – and together they planned to steal a safe from the warehouse office. At the appointed time, they broke in and began manhandling the safe through the front door – when nearby a bomb fell.

‘The ground heaved towards us like an uppercut,’ remembers Thompson.

Choked and blinded by dust, the burglars were thrown into the air, but all were unharmed, and three of them began to run.

Spider, however, had other ideas. A cat burglar by trade, Spider was adept at scaling walls. Spotting a young girl trapped in an upper window, he struggled up the wall to reach her. By the time he had her in his arms, a fire engine had arrived to bring them both down safely.

A policeman was so impressed by Spider’s courage that he asked him for his name and address. He wanted to recommend him for an award. Spider declined and left the scene quickly. The last thing he needed was public recognition.

In the flash of a bomb, a criminal gang had gone from stealing a safe to saving a life. The strange intensity of the Blitz could have no better illustration.

All kinds of behaviours changed beneath the bombs. Many people had love affairs they would not have had before the war.

‘As the opposite of death is life, I think I shall get seduced by Rupert,’ wrote 19-year-old Joan Wyndham in her diary. ‘If that’s really all there is to it,’ she subsequently noted, ‘I’d rather have a good smoke…’

For one man, an evening that began in the Fitzroy Tavern in London’s Soho led to his first homosexual encounter, in an empty railway carriage at Charing Cross station.

‘I thought: I may die tonight,’ he said years later. ‘I’m going to see what it’s like.’

The Blitz brought homosexuality closer to the surface of British society than it had ever been. It was a period described by Quentin Crisp as a ‘feast of love’ laid on by ‘Saint Adolf’.

For Peter Quennell, the bombing itself was an aphrodisiac. ‘All night,’ he wrote, ‘fear and pleasure combined to provoke a mood of wild exhilaration. The impact of a bomb a few hundred yards away merely sharpened pleasure’s edge.’

Afterwards, as Quennell and his lover, Astrid, lay in each other’s arms, they imagined themselves protected. Here was Blitz spirit in its most intimate form.

So how, in the end, did British people behave during the Blitz? Did they sing Roll Out the Barrel in communal shelters, shaking their fists at ‘bloody Adolf’, before cheerfully dodging the debris next morning on their way to work?

Or did they loot from bombed-out houses and fiddle their rations, while wearing badges telling others to mind their own business?

They tolerated without complaint and they complained without tolerance. They were scared and fearless; they coped and they cracked. They lost all hope – and they looked to the future.

The dark side of Radio One

I swam across the North Pole - Lewis Pugh