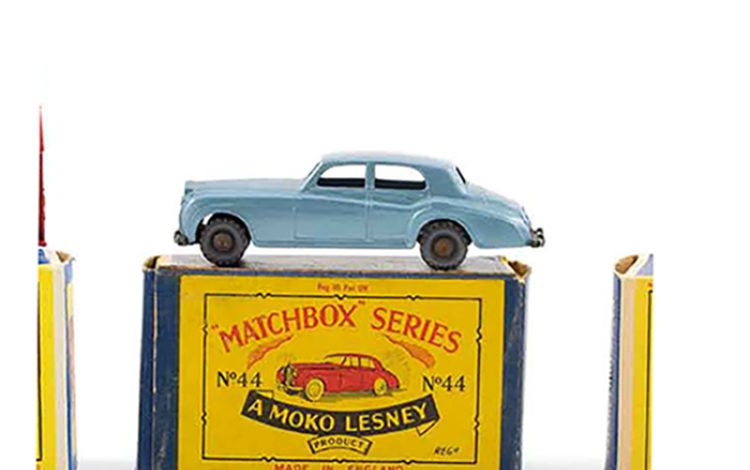 No child of the 1950s will ever forget how they chose to squander their pocket money – were they lucky enough actually to receive any.

I never did – though there were pennies and even shillings to be had from obliging aunts in return for shopping for all their essentials, such as bread, milk and Parma Violet cachous. Money also came from discarded Tizer bottles – 2d a time, which very conveniently was the cover price of the Beano.

But if you could run to real money (1/6d), then there was no contest: what you wanted was a Matchbox toy.

These hugely covetable little die-cast models came about in a rather ‘necessity is the mother of invention’ sort of way. Jack Odell, Leslie Smith and Rodney Smith (not related) owned a metal company called Lesney Products (the name a conflation of the first and second portions of the two Smiths’ Christian names). One day, Odell’s daughter told him that no toys were allowed at school unless they were small enough to fit into a matchbox – and lo, the rest is history!

Other early models were surprisingly mundane – a cement mixer, for heaven’s sake – while Dinky was introducing very cool Jaguars and even American saloons. Corgi, meanwhile, was installing interiors and windscreens and tyres, whereas Matchbox models, because of the very low price, remained quite hollow with one-piece metal wheels. Therein, though, lay the charm: the more glamorous toys were presents; Matchbox we bought for ourselves.

The company was sold and resold throughout the 1960s and beyond (it’s still going, now owned by Mattel), but the raison d’être of Matchbox rather vanished when they came to be sold in blister packs, this making a nonsense of the original concept.

I still have a few of mine (the Routemaster and the E-Type) – though I wish I’d kept the boxes. Apart from the aesthetic side, although a bashed-up (ie played-with) model might fetch a pound or two, a fine boxed example of a 1-75 series can fetch many hundreds.

Such models are avidly collected by the very old men who once, long ago, saved up to buy them at 1/6d apiece.

What was the tobacconist? Joseph Connolly