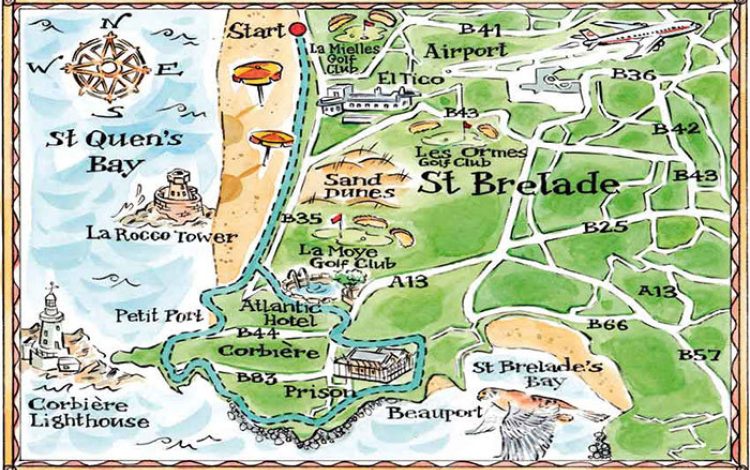 Like most walkers, I marvel at how maps conjure a landscape in our mind’s eye. Sometimes, however, a map’s clever symbolism falls so short of capturing the complexity of the real place that we might as well chuck it away (none of this applies to the excellent Gary Wing, of course, illustrator of our map). And maps always struggle with the scale-subverting magic of a small island.

Nowhere is this more apparent than on Jersey. The Channel Island’s tourist maps are excellent at depicting the tangle of lanes that locals liken to spaghetti. But this island’s marvellous intensity is completely off the map.

I visited Jersey briefly once before and found it busy and claustrophobic. I was wrong. My perceptions were transformed by a proper visit this spring when I was catapulted from cold, grey Southend Airport into something like paradise.

My walk began on the west coast at St Ouen’s Bay, which possessed the grandeur and glittering light of Australia. The only noise was the rumbling thunder of surf and occasional Jurassic roars from the island airport – the soundtrack to all small island life.

After dinner at the beachside restaurant of El Tico, I walked south, admiring the stone fortification of La Rocco Tower before turning up steep, 3,000-year-old sand dunes and past the pines of the gorgeous, art deco Atlantic Hotel, which channelled the spirit of the 1930s French Riviera.

Small islands are fickle – in a good way – constantly changing, perpetually subverting expectations. Memories of the ocean were dispelled a few hundred yards inland by a dense mosaic of lanes and tiny, Norman strip fields. Every space between the low stone walls was planted with furrows of Jersey Royals. How can tiny farms endure when modern small islands rely on financial services to balance the books? I found the answer in the taste of these new potatoes: why wouldn’t we grow such sweet gold if we could?

At Beauport, I was transported into another world again: pink, granite pillars clustered together like families above a bay of iridescent green. There were no houses, cars or people, except for a flushed pair of young lovers lying on pink sand, caught in the sun’s last glow.

I turned west to follow the coastal path along Jersey’s wild south-west tip, and the landscape changed again: a craggy wilderness of coconut-scented, yellow gorse, blue ocean and a kestrel calling overhead.

Then, abruptly, Jersey unsettled me again by revealing a massive modern prison, enclosed by vast, barbed-wire-topped fences, which the path politely skirted. Before the Romantics decided small islands were utopian places of self-realisation, they were often dystopian sites of incarceration. Modern small islands like to boast of being crimeless places where every door is unlocked. Not so Jersey, although its 142 inmates from a population of 100,000 is roughly comparable to the UK’s prison population.

Beyond the prison, Jersey changed once more, with the open heathland of the Corbière peninsula.

I had totally underestimated the length of this walk and darkness fell as I reached Jersey’s south-western tip, an otherworldly moonscape of dwarf heathers, dwarf gorse and carpets of lurid-flowered hottentot fig, an invasive species which has smothered the coastline since it was planted to cover up various military fortifications.

Nazi architecture looms large on this headland and took on a sinister aspect as night fell. If I ever find another five miles that assails me with such scenic variety, where the past is unusually and unsettlingly present, I imagine it will be served up only by another glorious small island.

*I walked a rough loop taking in the south end of St Ouen’s Bay before heading inland to rejoin the coast at Beauport before walking back west. My route included busy narrow roads but you can avoid traffic by staying on the well-signed coast path or taking dedicated walk/cycle tracks such as Corbière Walk