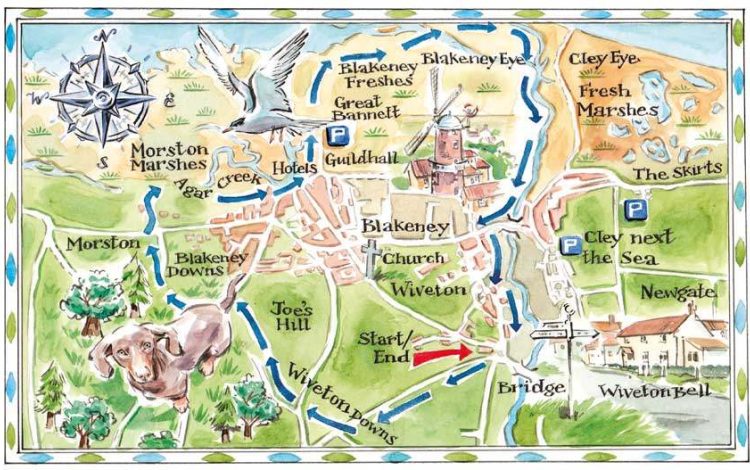 A walk's added dimension with a diminutive companion: Betty the miniature dachshund

When we think of natural walkers, we picture long-legged people, with lolloping gaits – taciturn toilers who gobble up the miles, effortlessly, with every stride.

My new walking companion is definitely the strong and silent type, but she speeds through the most epic of expeditions on legs no more than four inches long.

Betty the miniature dachshund has added not one but dozens of new dimensions to our walks since we became one of those families who paid enormously over the odds for a lockdown puppy.

Despite her unexpected aptitude for a long trek, I have never before known a dog not to greet the picking-up of collar and lead with anything other than unrestrained joy. Betty rolls her soulful eyes and slinks into a corner. For the first quarter of a mile, this small, brown sausage is on stroll-strike, tucked under my arm. Eventually, she agrees to join in.

This scenic North Norfolk round began with a peaceful lane up to Wiveton Downs, one of several striking eskers – narrow ridges of sand and gravel – deposited on this southern boundary of the last glaciation. There followed a peaceful track and footpath through high, dry farmland, where Betty happily trotted off the lead, legs blurred in movement like the wings of a bumblebee.

The dogs of my childhood, wild German pointers and an untrainable Jack Russell, were rarely trusted off the lead, but Betty is the most loyal of pack animals, sticking close to our legs and never haring over fields in pursuit of prey.

There were fine views along the coast as the path descended Blakeney Downs and joined the busy coast path alongside Morston salt marsh. Betty was now on the lead and ready to meet her public.

One dimension that this four-legged celebrity has added to my walks is conversation. Norfolk people (I can say this because I am one) aren’t the most gregarious. My cheery ‘Hello’s are often greeted with a suspicious grunt, but speechless Betty elicits a far better response – usually ‘Ohmygodshe’ssocute.’

Like any well-trained VIP, Betty receives all attention with a gracious affability while maintaining an imperceptible distance. Every fan gets a minute, but no more. She’s a child star, after all, having calmly endured since birth being grappled by her breeder’s kids and then our small children.

Her adoring public are tolerated, but she prefers the company of her own kind: big hounds, small pooches, bullish terriers, salivating attack-dogs and primped-up toy pups – Betty greets them all with wide-eyed interest and a companionable sniff of the bum.

We followed the coast path north across the marshes on the sea bank that protects Blakeney Freshes. This is emphatically not a dog-off-the-lead stretch, with diverse populations of wading birds perusing muddy creeks, terns over the sea and overwintering geese on the grasslands. Best not to bring a dog here at all during the April-July nesting season.

Readers with long memories might recall a column in which I ranted about the dominance of dogs on walks. I still think there should be dog-free paths and if I was GB dictator, I’d pass a one-dog-per-household decree. But dogs add greatly to the sum of human happiness, too – the perfect pack animal for pack people.

Another dimension that Betty has added to my walks is helping me see places anew. Her picture of the world is painted by her questing nose, sniffing the air, tasting for notes of interest, friendship, food and danger. I’m in awe of her doggy superpowers and her willingness to see the very best in every person and drooling dog we pass.

Her legs were still whizzing away when we returned to Wiveton and its lovely pub.

Park in Wiveton villlage car park across the green from the Wiveton Bell, grid ref TG043428. Follow lane up to Wiveton Downs; turn right along the downs to pick up the public footpath that wiggles across fields to Blakeney Downs, crossing the road to join the Norfolk coast path. Turn right (east) through Blakeney, around the Freshes, returning inland towards Cley Windmill. Turn west along the coast road. The first left returns you to Wiveton. Shorter versions of this eight-mile walk are available! OS Map 251 Norfolk Coast Central

Travels with my daughter, Florence Welch of Florence and the Machine. By Nick Welch