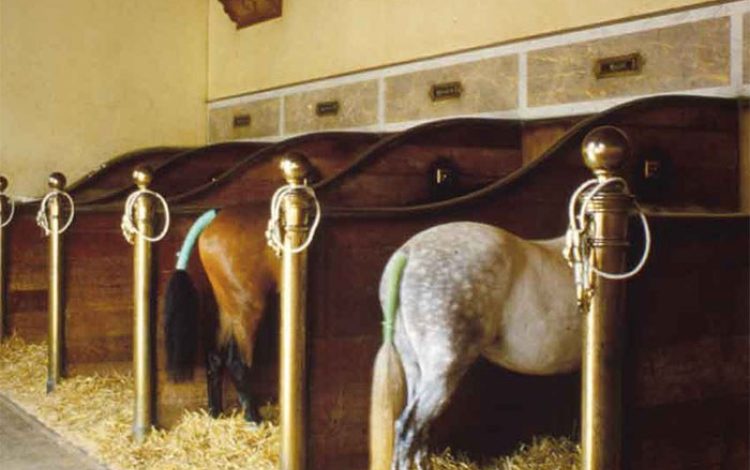 ‘There is an air of melancholy interest about the stables at Manderston in Berwickshire,’ reported Country Life in a 1914 article called Small Country Buildings of Today.

The anonymous correspondent (signing himself ‘X’) was also no doubt grimly aware that, within a few years of these stables’ being built, the age of the horse would be over, with the age of the car taking its place. So, indeed, it proved to be.

He was also inordinately rich from his father’s fortune made from the hemp and herring trade with Russia. He spent the fortune on creating the best-built and most beautiful house in the country.

His architect, John Kinross, already renowned for his attention to detail, was mooted as the perfect man to realise these lofty aims. He was told by Sir James, ‘It does not matter how much it costs.’ At the stables, he produced a neoclassical quadrangle of considerable refinement; sober and restrained, yet somewhat magnificent, with a full-height entrance arch in finest, grey ashlar.

In the 18th century, this would have been more economically built in rendered brick. In the late-19th century, no such restraints were considered by either Miller or Kinross at Manderston!

You first progress through a pilastered and pedimented archway beneath a heraldic shield and a great brass bell, flanked on either side by carved friezes of the liveliest kind; of a hunt in full cry, with the fox, hounds, horses and a horn-blowing huntsman, all of them charging along beneath great cedar trees.

Imposingly fashioned pediments hold sway around the main stable yard, which is paved with radial patterns of stone set into brick. Adding yet more dignity are the finest bronze lions with tie-up rings in their mouths, awaiting visiting horses. There are rectangular fanlights atop every stable door, while semicircular fanlights enhance the arched entrances.

Another great pediment over an arched doorway leads you into the stalls, where your heart is suddenly set a-pounding by their sheer architectural purity. All was – and to this day still is – immaculate, with knobs on; literally so – with a shining, brass ball atop a shining, brass heelpost between every teak stall. Each one of them is still hung with a head collar of the softest white kid, with brass buckles and a white rope.

On the floor, woodblocks make another immaculate contribution, laid in a herringbone pattern that is so neat and clean you feel that could eat your breakfast off them. Sadly unseen in the photograph are the long and gleaming brass mangers for the horses.

A complex system of ventilation is on proud parade, with panels of flourishing decorative woodwork, while beneath them the names of the horses, in brass filigree frames, are set into marble plaques above each stall. Honouring the name Miller, they all begin with M: Malakoff, Mango, Magic, Monarch, Marsden, Mystery, Matchless, Margot, Milton, Mable, Mercat, Maiden Erlegh, Monty and Milly.

The stables at Manderston have been described in Horse and Hound as ‘the finest in the world’.

‘X’ in Country Life gave them lyrical praise: ‘The Master of such a stable might spend many pleasant moments watching the horses enjoy their rest and listening to their slow, solemn munching and the rattle of a chain or the stamp of a hoof, which are such pleasant sounds to the ear of a man who loves horses.’

The tack room too was an elegant triumph; with saddles and bridles in abundance. Here there are lofty, glass-fronted rosewood cupboards ranged around a black-and-white chequerboard marble floor.

Laments, though, were always hovering on the horizon, with Sir James full of foreboding at the lack of romance in his new arrangements: ‘Will our grandchildren visit with the same tender regret the deserted garages and try to sniff the odours of petrol?’

At Manderston, they can do just that. For almost immediately after being built, this great Edwardian equine palace was indeed to be declared redundant by the arrival of the motor car. Nothing daunted, Miller set to on a ‘Motor House’, a building every bit as grand as the stables; once again, no expense was spared.

It boasts a Venetian window and is lined throughout with white, glazed enamel tiles with lines of brilliant blue – even in the working pits. There were also marble inlays around all the taps, radiators, knobs and levers.

As it roared ahead into the future, no more exhilarating example than Manderston’s can be found to show the obsolescence of the stable.

In March 1908, the Building News was still wary of recommending such changes; it declared that a series of garages should be built at the same time as new stables, noting that ‘the engine house and garage are modern additions, not always required but generally found’.

That his equine palace had been an architectural triumph was never in dispute. Kinross must of course have been greatly encouraged by Sir James’s cheering dictum ringing in his ears: ‘Money is of no importance whatsoever.'

After this terrific trial run, he was given a free rein with his designs for Manderston House.