Brough Scott's Tip For The Derby 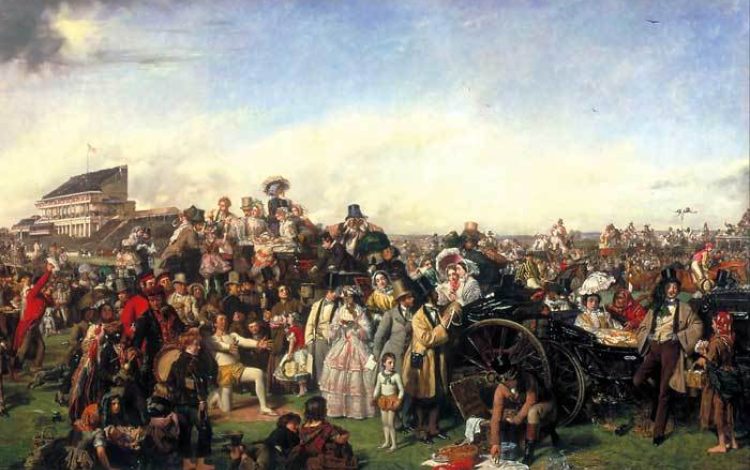 Brough Scott celebrates the Derby’s raffish, reckless charm – and the gifted jockeys who master Epsom’s helter-skelter of a racecourse. He also has a tip for you

Get to the bottom to read my tip for Saturday's Derby winner.

Derby Day is still pretty racy in every sense, but not as racy as when William Powell Frith painted his iconic picture. Nor, for that matter, as racy as William Frith himself. He had a wife and five children in Bayswater and a mistress and seven more up the road.

William Frith was born two hundred years ago and didn’t visit Epsom until 1856, accompanied by that talented and splendidly named fellow artist Augustus Egg. Frith wasn’t interested in the Derby as a race but fascinated by the fun and folly of the teeming social mix.

He wasn’t exaggerating – Derby Day in Victorian times was the most extraordinary and recklessly extravagant carnival occasion of the whole year. Tom Dawson, the winning trainer in 1856, won £25,000 on his horse Pretender, left the cash in his hatbox when he changed trains at Northallerton on the way home, advertised for the box as ‘containing nothing of interest to anyone but the trainer’, and had it returned intact. That figure then is some £2.6 million now – just imagine.

With its free access and Epsom’s proximity to London, the running of the Derby had become an undeclared public holiday for the metropolis – so much so that in 1847 the House of Commons moved not to sit on Derby Day.

This official state of non-attendance lasted 50 years and MPs were plentiful at Epsom until recent more puritanical times. While Queen Victoria might not have been amused, Edward VII very much was, and when, as Prince of Wales in 1896, he led in his Persimmon there was wild applause across the Downs, not least from his then chief mistress Jennie Churchill and her son Winston, who had backed the winner.

It has been British horseracing’s inestimable good fortune that the royal connection has continued and that, for all 67 years of her reign, our present monarch has had breeding and racing of thoroughbreds as her No. 1 diversion. Quite how would we have managed without her presence on Derby Day?

Queen Victoria was not alone in her indifference to the race. Beyond the day out and the dodgy attractions of Frith’s masterpiece, the appeal of Derby Day to non-believers would have been difficult then and unfathomable today.

Yet there was and is a truth behind the trumpery. For the thoroughbred racehorse is the fastest weight-carrying creature the world has ever seen, has been developed over 350 years of selective breeding, is Britain’s greatest gift to the animal kingdom and, until the motor car overtook it at the turn of the century, was the quickest a man or woman could travel alone unless they jumped off a cliff in suicide.

This meant that – to be successful; to breed, train, own or ride big winners, the biggest of all being the Derby – was to join the elite.

British horseracing was seen as such an enviable pursuit that other nations imported it wholesale. In France, the Duc d’Orleans began affairs at Chantilly in 1833 and, by 1845, there were 200 horses and 20 trainers all ensconced there, from across the Channel. That pattern was reproduced around the capitals of Europe and the racecourse became an essential part of all the countries of the British Empire.

That may explain some things but not the Derby itself. For, while almost all these other territories have Derbies of their own, none of them can replicate the challenges of the Epsom track, for the simple reason that no one would be mad enough to try.

A few years back, I was walking the mile-and-a-half, horseshoe-shaped helter-skelter which makes up the Derby course with a French jockey and trainer who had a horse running on the morrow. We had climbed more than 100 feet in the opening 800 yards and now looked out across the valley around which the track swooped down through Tattenham Corner to the great white ocean liner of the grandstand beyond. Trainer and jockey both paled, looked at each other and said something like ‘Ils sont fous, les Anglais.’

Jump racing, and especially the Grand National, sets more obvious and more frequent risks but, for intensive test of nerve, balance, speed, strength and stamina, nothing matches the demands on horse and rider of these two and a half minutes round the Derby track.

For this is a one-shot chance. A thoroughbred colt is faced in the summer of its three-year-old career with a challenge which, if passed, can prove his future worth as a daddy of the breed. Galileo, the world’s most successful stallion, won the Derby in 2001.

For the horse, this means having the resolve and sharpness to handle the early hurly-burly. Only last year, the hot favourite, Saxon Warrior, lost position in the first five strides and never recovered. The colt – almost all runners are colts and only six fillies have won in 230 years – has to then hold his place as the track snakes one way and then the other on the climb, to balance in the sharp descent through Tattenham Corner and finally to drive on for the closing furlongs on a track which cambers down to the inside rail. Many have tried and most have failed.

Jockeys have plenty more chances but that does not make their chance any easier and it is no coincidence that the finest Derby records belong to men of unique nerve and flair. In 1886, Fred Archer won his fifth Derby before shooting himself six months later, in a fit of fevered depression, aged 29. The much sunnier Fred Donoghue won six Derbies between 1915 and 1925, while the incomparable and at times incomprehensible Lester Piggott won nine times, the first as an 18-year-old on the suitably named Never Say Die.

I was not around for Archer or Donoghue but witnessed almost all 47 astonishing years of Lester. He had freakish equine intuition, implacable determination and the iron-hard nerve that only great champions possess. He brought the Derby into the modern era but no one could excuse him of sucking up to the media. These days, we have been extremely lucky to have in Frankie Dettori the most effervescent jockey that ever lived.

The Derby may no longer stop the nation, empty London or mercifully get up to quite the tricks of Frith’s time. But when Frankie finally won his first Derby in front of the Queen after 14 failed attempts, there was hardly a soul in the country who did not smile at the outcome.

One thing that did not make an appearance in the original Derby Day picture but was already popular in the 1850s, was a hot air balloon. But they are around now and, some time in the 1970s, NBC had the idea of sticking me and the great Irish broadcaster Michael O’Hehir in a tethered balloon, so that we could look down with the pretence of describing the vivid Epsom panorama from high above.

Unfortunately someone let go of the rope and we were whisked to the skies over Tattenham Corner with the producer’s last words ringing in our ears: ‘You are not ******* insured.’

I think William Frith would have liked that.

My idea of the Derby winner is Bangkok trained next to Watership Down by Andrew Balding, brother of Clare and son of Ian Balding who trained Mill Reef to win from the same famous Kingsclere Stables in 1971.

More poignantly Bangkok runs in the blue and white silks of Kingpower Racing who represent the family of the late owner Vichai Srivaddhanaprabha, the Thai businessman who died after his helicopter crashed on leaving his football club Leicester City. Bangkok is currently 8/1.