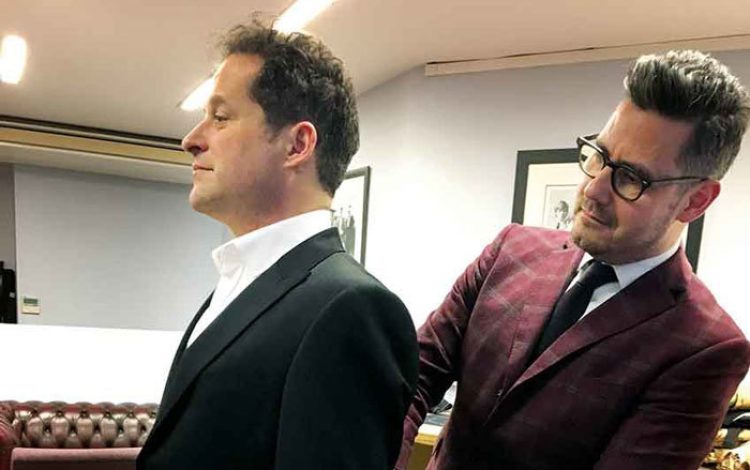 What do you give the man who has everything? The dignity of a bespoke suit – so he doesn’t look like a broken-down old horse.

A bespoke suit is not just for Christmas, but for life. For death, too, as nothing is so becoming at a funeral, whether worn by the mourners or the deceased.

Not forgetting a wedding. Twenty years ago, my wife, Maja, in a moment of folly, agreed to marry me. It seems like only yesterday that, skipping through Soho with a full head of hair, I entered Mr Eddie’s shop on Berwick Street. Eddie Kerr had one foot in classic tailoring; the other in showbusiness. He made sharp Mod suits for Matt Monro, and the Olympic blazers for Chariots of Fire. He went broad in the lapel for psychedelic rockers Procul Harum, and long in the drape for Russ Abbot’s teddy-boy suits.

Now Eddie’s son Chris has made clothes for the new Downton Abbey film. In 1998, Chris had just started in the business. Eddie had dressed the chimps in the PG Tips ads – so Chris knew how to smooth out the lumps. For £600, he made me a three-button, double-vented two-piece; dark blue with a slim, one-inch chalk pinstripe. It was beautiful, but I wore it on stage as a guitarist – and I kept eating. The jacket still fits across the shoulders but seems to have shrunk at the waist. There are holes from cigar ash, and the right shoulder has a furrow from my guitar strap. I haven’t seen the trousers since they went their separate ways in an airborne scissors kick. It’s time to renew my sartorial vows to Soho.

British tailors established the suit as the world’s white-collar workwear: the Japanese call a suit a sabiro, after Savile Row. Tailoring remains one of Britain’s most successful artisanal industries. A network of shops and workshops survives in central London: on Savile Row, Soho and north of Oxford Street in what artists used to call Fitzrovia and my great-grandfather and his tailoring progeny knew as the West End’s schmatte district. A schmatte is a piece of cloth.

A suit is a collaboration between client and master tailor; then the cutter and tailors turn cloth into elegance. My great-grandfather was a master tailorfor Huntsman, still on Savile Row. My grandfather’s innovation, the sleek and labour-saving pocketless coat, never caught on. Switching careers into music and gambling, he became that curiosity, a poor man who’s lost his shirt but wears a handmade suit. My father, Benny Green, saxophonist and radio presenter, was a snappy dresser, too.

Twenty years on, Eddie and Chris now manage the longest-running firm in Soho. Chris has dressed Nick Cave, Johnny Depp, four Bond villains and Tom Hardy – twice, because he played both Kray twins in Legend. He remains the only other person apart from Maja to check periodically on my inside leg.

A pile of photos from Downton Abbey is on the cutting table: Chris has just finished making period clothes for the movie. From the excess yardage on a bolt of cloth used for Mr Bates the valet’s workwear, I order a pair of flat-fronted morning-suit trousers, cut as though Mr Bates has joined the Small Faces. Would it be too Small Faces to get a matching jacket? Chris murmurs that it would be, and reminds me that gentlemen wear coats and potatoes wear jackets.

‘There’s no difference between Savile Row and us in the way we make suits, apart from the cost,’ Chris explains. ‘Most coat-makers, trouser-makers, waistcoat-makers, they’re self-employed. One coat-maker might work for three or four shops. When I use coat-makers who work for shops on Savile Row, they don’t make what I’ve cut any differently. But if you’re in Mayfair, you’re paying Mayfair rates and you’ve got the Savile Row brand. And you don’t get to be a cutter on Savile Row unless you’re good.’

A suit begins with a chat on the sofas at the back of the shop. Chris establishes the suit’s purpose and, most importantly, the customer’s taste, then picks out a few books of cloth. There’s no pressure. You can sit with the books for hours. Tailors’ runners come and go, bearing ‘bastes’, half-finished coats with innards exposed. Regulars drop by for fittings or just to say hello. The shop is an island of civilisation amid the barbarism of off-the-peg.

‘Once you’ve chosen your cloth,’ Chris explains, ‘we measure and make notes on your figure. Five different people could measure the same around the chest, but some will carry the weight more in their backs than in their fronts.’ He gives me a significant look. ‘Some of them carry it more around the waist.’

‘From there, we go to the fabric,’ Chris says. ‘Cutting is crucial. The cutter has to get it right. But you also need a good tailor to put things together.’

As many as four tailors will work on a single suit. Chris now offers both bespoke and ‘semi-bespoke’ or ‘made-to-measure’. My new made-to-measure suit cost £1,200; a bespoke suit would have cost £2,400.

‘Bespoke is more labour-intensive and takes up to 80 hours. There’s more handwork on the suit, including on the inside, with hand-sewn linings and buttonholes. You won’t see all of it, but it’s all about the structure. Made-to-measure is a simplified version with less handwork and more machine work. But it’s still canvassed [given form by varying layers of rough canvas-like material, unlike the ‘unstructured’ style of the 1980s and cheap suits from department stores], it still has form and structure, and it’s still made to your specifications.’

Everybody wants the notch (the indent where the collar meets the lapel) and the placket (the flap that covers a pocket) to be cut their particular way. And every body is different. In 1998, mine had more muscle on the left than 0n the right from my playing the guitar. In 2019, a sustained programme of idleness has endowed my body with no muscle at all. My legs look like chicken drumsticks. My shoulders are bowed. My stomach is paunched. Still, I tell Chris, I buy 33-inch trousers off the peg in the United States.

Chris girdles my ample middle with his tape. ‘Thirty-six and a half. And that’s standing up.’

In order for my blue pinstripe to remain the same, its waist has changed. My tissue- thin off-the-peg chinos are a tissue of lies. Worse, I have become ten per cent fatter just by entering Chris’s shop. The good news is that I will look much slimmer if I persevere with the treatment.

As Chris writes my anniversary replica into his book, I confess that I’m ashamed of my off-the-peg dinner suit. He sits me down on the sofa for a chat. Patiently, he explains how the light reflects off the different fabrics, and why the fuller-buttocked gentleman might consider double-venting for posterior discretion.

Working with the Socratic method and the sample books, Chris discovers my obscure yearning to dress like Anthony Eden. A one-button, peak-lapelled two-piece solves my sartorial Suez Crisis: traditionally English, but modern enough for America, where I live. Wondering where Anthony Eden stashed his uppers on a night out, I ask about a ticket pocket.

‘Never on a dinner suit,’ Chris explains. ‘How about a hidden phone pocket?’

Perfect! I request a final touch: a button on an inside breast pocket so I won’t lose my wallet if I’m drunk.

Chris sighs as though it’s PG Tips all over again, and makes a note. ‘Come back in four weeks for a fitting,’ he says. ‘Or in 20 years.’