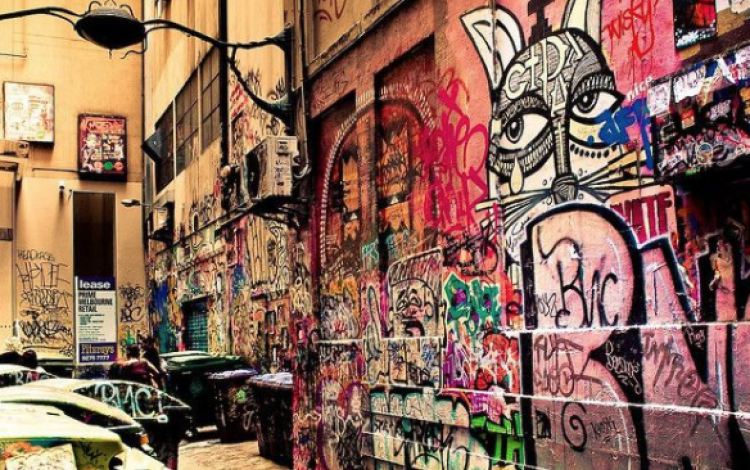 No, they are not Serbian warlords of the 10th century. They are the signatures – ‘tags’ – of Parisian graffiti artists on the walls of railway cuttings, which I observed the other day while staring out of the window of the Eurostar on its way into Gare du Nord.

While impressed by the bravery and linguistic ingenuity of these Gallic scrawlers, I couldn’t help feeling a wave of British snobbishness and pride, just because the quality of the graffiti was so much lower than the London equivalents. I even felt slightly pitiful. The lettering was uneven, the colours rough and most of the tags looked unfinished.

Graffiti, we know, has forever been part of city life and indeed it is one of the joys of living in the metropolis, at least when it is well done. I realise not everyone will agree with me.

Who are these noble muralists who decide to brighten up the ugly walls of industrialisation with their decorations and provocations?

Why do they bother? I suppose it’s because they want to make a mark or say something, and the conventional avenues for self-expression appear closed to them.

In London, as in Paris the massive walls of railway cuttings provide a vast canvas for the experiments of the anonymous scribes. In London, though, the works are generally meticulously finished, multicoloured and very neat; quite an achievement when you consider that the artists are hardly working under the easiest conditions.

Gnomic utterances are sometimes seen. On the bridge at Westbourne Park station in London, someone has sprayed the legend ‘DMG Fund’ which, I speculated, could be the work of a rebellious hedge fund manager trying to give his brand a streetwise edge.

While in the medieval city state of Arezzo recently, I decided to ignore the churches with their Piero della Francesca frescoes – another form of graffiti in a way – and make a study of contemporary mural decorations. There was not much of beauty here.

In fact, the graffiti artists did not seem to be as impressed by Arezzo and its beauties as me. On the wall of a fashion emporium a modern scrawler has painted an anarchy symbol. On the wall around the park I read the nihilistic legend ‘F**k Life’. In the same park, someone has written a similarly gloomy phrase: ‘Contro tutto e tutti, fino alla fine’, which means something like ‘We are against everyone and everything until the very end.’

Alongside this was the less philosophical ‘Bo’. And another anonymous artist has recommended a possible course of action to take when confronted by such existential misery: just around the corner, I read the suggestion, ‘Smoke weed’, in foot-high, black, spray-painted letters.

On another city wall in Arezzo, there is a plaque commemorating the artist and first Renaissance art historian Giorgio Vasari, born in 1511. Around twenty subversives, perhaps feeling that they have as much right as Vasari to be remembered, have added their own names and dates with felt pen.

Romans loved graffiti. In Life of Brian, Graham Chapman paints ‘Romanes eunt domus’ on the walls and has his grammar corrected by John Cleese, who tells him to use the imperative and asks, ‘How many Romans?’

And this was not so far from the truth: the editor of this magazine tells me that Roman graffitists often got their grammar wrong. He cites an example from a house in Pompeii where someone has written ‘militat omnes’ for ‘everyone fights’, wrongly using a single verb with a plural noun.

The academic Matthew Champion recently published a study of the scratchings of the ordinary folk. He found that images were preferred to text inscriptions, probably because standards of literacy were much lower. The most common marks were of ships and demons, the one representing the universal fear that loved ones would be lost at sea, and the other everybody’s fear of ending up in hell.

We all know that, very occasionally, graffiti artists hit the mainstream. Banksy’s stencils, swiftly removed but always photographed, has brought him worldwide fame and commercial success. Jean-Michel Basquiat started as a graffiti artist and now his canvases are collected by wealthy art dealers such as Lars from heavy metal band Metallica, and sell for millions. Basquiat can’t reap the benefit, having died at twenty-seven. A show of his work is now on at the Barbican.

In the Eighties there was Keith Haring, who created beautifully simple dancing figures, and painted them on the walls of the subway. He also died young, at thirty-one. His graffiti is called ‘public art’ rather than anything anti-social.

Parisians need to improve their graffiti. Just writing your nickname on a wall is not good enough. Graffiti should be political or beautiful, or both. I always loved the graffito beloved of the French so-called Situationists during the Fifties, people such as Guy Debord. When they weren’t playing the bongos in jazz basements, they liked to go round writing ‘Ne travaillez jamais’ on the walls – an excellent sentiment.

What was paper cricket? - Terry Morgan

Getting Dressed: The Oldie Swimsuit competition