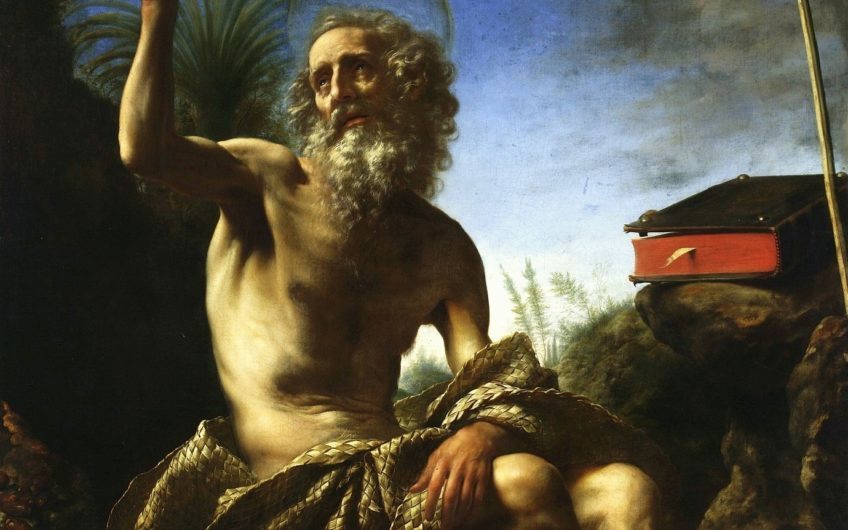 The walls of the dwelling places of the world are getting covered in the footprints of people climbing up them.

This is causing much personal distress, and some are saying, almost certainly without reason, that they would rather have a bug, any bug.

Calm down, we are saying here at the Institute for Irrelevant Studies. You do not know what you are saying, and baby, it's cold outside. If you get properly nervous, stick your nose in Daniel Defoe's Journal of the Plague Year, recently reissued by Penguin, and count your blessings. If you merely seek company in your isolation, we at the Institute consider that it may be handy to reflect that this has being going on for years. Millennia, even.

An early self-isolator was the Gnostic saint Simon Stylites, who stood on a pillar somewhere in the Levant in order to maximise his proximity to the Almighty. Other stylites, which is what someone who takes up residence on a pillar is called, accepted the nearer-my-God-to-Thee challenge, and pretty soon no Syrian summit was complete without its columntop mystic raving about the Apocalypse like the front page of the Guardian.

The popularity of stylitism soon led to overcrowding, and late-coming self-isolators took to the trees, where they were known, in case you are interested, as dendrites. One monk lived in a hollow but living plane-tree trunk, communicating with the world via a small trapdoor at mouth level. It is not known if the world communicated back. If it did, he no longer counts as a self-isolator - just sayin'.

Monks and nuns continued to self-isolate all the way through the Middle Ages, chatting away to the Almighty like hey-my-nanny and repelling clouds of demons as persistent as any virus and (in the case of St Jerome) a lot sexier.

As the Age of Enlightenment came upon the world and people began to be a bit iffy about demons, the chattering classes started to think first that self-isolation was merely silly, and then that it was actually rather picturesque, darling.

Payne Knight, the builder of the Gothic edition of Downton Castle north of Ludlow, knocked up a hermitage in a bijou cave in the Downton Gorge and installed a hermit - an early case of someone agreeing to self-isolate for a wage, possibly providing inspiration for the mortgage holidays currently on offer.

Several of the early Downton hermits were by all accounts carried away by coughs. A subsequent hermit, who took no criticism from anyone and knew on what side his bread was buttered, demanded a fireplace. Payne Knight objected on the grounds that hermits were supposed to be ascetics, and ascetics thrived on self-denial and cold and damp. The hermit stuck to his guns, maintaining that self-denial was all very well but denial-by-mad-landlord was wicked exploitation. A fireplace was grudgingly installed, appearances being kept up by the fact that the chimney wound several hundred yards up the side of the gorge and vented the smoke discreetly in the middle of a copse.

The early modern era saw a sharp divide in the ethics of self-isolation. On the one hand, there was Greta Garbo, who wanted to be alone, and was allowed to be while people sent her large unsolicited cheques. On the other was the 1920s vogue for flagpole-sitting, in which impoverished Americans sat on the buttons at the top of flagpoles for weeks at a time, the principal exponent and boss sitter being one Shipwreck Kelly, who lasted 22 days and six hours on top of a pole outside Madison Square Garden.

Then flagpole-sitting faded, and self-isolation became the province of a few hippies in caves in the Himalaya and a handful of solo yachties trundling round the world, and the public stopped paying attention.

And now it is back. Simon Stylites and St Jerome would have recognized it without a flicker. They had a hotline to the Divine. We have got Netflix and email and the social media shambles. Unlike them, though, we have got carrots to cultivate and novels to start and tear up and start again and ocean liners to build out of matchsticks....

Any minute now, the sun will come out, and we can stop climbing walls and go and stand on that flat bit on the roof and wave at the other people on the other roofs and hope that they too have been made calm and accepting of their historic lot by this bulletin from the Institute of Irrelevant Studies. Membership is free. Relevance excludes. Onward!

Sam Llewellyn is editor of The Marine Quarterly