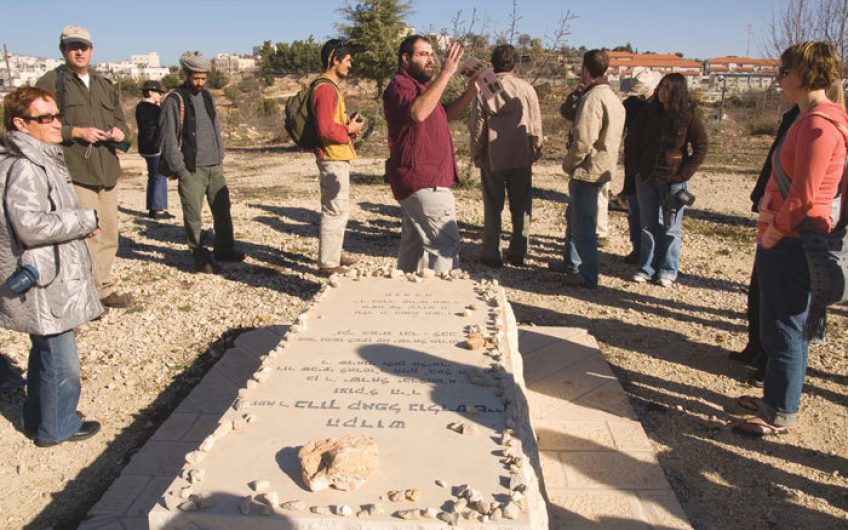 Slowly I ascended a long flight of wide granite steps leading to the Ibrahimi mosque, trailing my right hand along Herod’s wall – 20 metres high, some of its blocks measuring 7.5. x 1.4 metres. Inevitably I remembered Dr Baruch Goldstein who on another cold, foggy February morning drove from Kiryat Arba and walked up these steps wearing his IDF uniform, armed with a rifle. God wanted him to kill as many Muslims as possible while they were kneeling within the Haram al-Ibrahimi saying their Friday prayers.

A few days earlier, in February 2009, I had crossed the ‘border’ under a low grey sky into Hebron’s H2 sector. Here at Bab al-Zawiya in al-Khalil (Hebron in Arabic) the besieged Old City begins, now resembling a war zone (which it too often is) rather than a commercial and residential district (which it once was). Side streets are barricaded by tangles of razor wire, by metal gates six metres high, by concrete blocks three metres square. Look up and you see on high roofs soldiers and guns and sandbags, and Israeli flags and radio antennae sprouting from Mamluk domes. At street level all is quiet; only settler and security force vehicles are allowed – and a few Palestinian cars with special permits obtained after prolonged hassles.

Since the 1994 massacre carried out by Dr Goldstein – an American Jewish settler who opened fire in the mosque in the Tomb of the Patriarchs in Hebron, killing 29 Palestinians and wounding more than 125 – more than half the Old City’s shops have been closed and sealed by the Israel Defense Forces (IDF), and its resident population has declined from 30,000 to 10,000. Traditionally, this souk was one of the West Bank’s busiest, employing thousands. Why was a Palestinian city punished because a Brooklyn-born religious maniac murdered 29 Palestinians?

At the entrance to the medieval souk I turned left up a short, steep, narrow street of 18th-century three-storey terraced houses, the pre-settler homes of prosperous extended families – Palestinian merchants, doctors, lawyers and government officials. My landlord, Hisham, was waiting for me, looking slightly apprehensive. A would-be tourist guide, he hoped to convert this long-empty house into a backpackers’ hostel. But would I now find it too primitive? He couldn’t know that by Balata standards (the Palestinian refugee camp) it seemed five-star. Hisham was congenial and, I discovered, very knowledgeable. On his brief daily visits to check on my welfare, he drip-fed me fascinating bits of local lore.

Hisham’s was one of many homes attacked by Israeli settlers during the Eighties and early Nineties. Most of the neighbouring houses are now empty, and one had been half-demolished by settlers in retaliation for the owner’s refusal to sell. A large sheet of corrugated iron hung loose from a freestanding gable end, and when the wind rose its clattering sounded like protests reverberating through this otherwise silent street. If I leaned out of my iron-barred window I could see – within 100 yards – three separate army posts guarding the bright new settlement buildings that tower above al-Khalil’s ancient souk. In this top-floor, high-ceilinged flat only the reception room and the kitchen were electrified. After dark, as I made my way around by torchlight, I fancied happy families had lived here; the ghosts were amiable.

Hisham borrowed a rusty one-bar electric fire which crackled ominously when plugged in and did nothing appreciable to raise the temperature. All day the sky remained low and dark, the wind icy, the thunder loud, the hail showers frequent.

The wind was still icy when I set off at sunrise for al-Haram al-Ibrahimi/the Tomb of the Patriarchs, to Jews and Muslims one of the most sacred places in Palestine, the burial ground for Abraham and Sarah, and other Hebrew patriarchs and their wives. No archaeological artefact has been found to indicate that this particular place was holy before Herod built a magnificent structure here in the first century BC to honour Abraham et al. But that’s irrelevant: Genesis guarantees the link between the general Hebron area and the patriarchs.

For fifteen minutes I walked through the silent souk, past scores of shuttered shops, meeting no one. At that hour, before the Goldstein massacre, those covered passageways and open alleys would have been as bustling as Nablus’s casbah. Poor Hebron! A few hours later some shops would open but even at its busiest the old souk is now two-thirds ‘in abeyance’, as one mournful carpet merchant put it.

All exits are aggressively militarised. I found myself confronting thick metal bars blocking a graceful archway overlooked from on high by electronic gadgets. I squeezed into a covered passageway where I pushed slowly through a heavy, ceiling-high turnstile admitting me to another short, covered passageway lined with shops – their doors welded shut. Beside the next iron grill a soldier in a sentry-box on stilts bent down to take my passport. Eleven other conscripts lounged nearby, all wearing woolly balaclavas and scarves and gloves but looking cold and extra bad-tempered.

After making it through the final checkpoint, I reached the entrance of the al-Ibrahimi mosque, remembering Dr Baruch Goldstein. In the vast twilit vestibule a smiling youth pigeon-holed my boots and whispered, ‘Welcome! Welcome!’ – followed by what sounded like a brief Arabic prayer. Then I entered the empty mosque – where something very odd happened. All thoughts of Goldstein and his immense significance evaporated, as did the anger engendered by Hebron’s tragedy – which can feel like the Palestinians’ tragedy in concentrated form. A strangeness overwhelmed me: suddenly I seemed to have been transferred to another plane. But by what? Maybe nothing more than this mosque’s densely complicated history.

Like all the Holy Land’s places of pilgrimage, the Haram al-Ibrahimi is an exciting cultural ragbag. Herodian stonework, chunks of the Emperor Justinian’s church incorporated into an early Umayyad mosque – itself added to by Ayyubids, before the Crusaders turned it into a church and contributed the stained-glass window above the main entrance and the soaring central arches. The Ottomans added and subtracted bits and pieces – nothing of much consequence, certainly nothing to rival the marquetry minbar (pulpit) created for the Ascalon mosque in 1091 and exactly a century later moved to Hebron on Saladin’s instructions. During all my visits to Haram al-Ibrahimi I found myself repeatedly drawn back to the minbar.

In 1994 the Haram was divided into ‘mosque’ and ‘synagogue’ and the connecting doors are kept permanently locked, a necessary but sad precaution. Everyone can see, through bars, the make-believe tombs of Abraham and Sarah, 14th-century Mamluk cenotaphs resembling decorated tents. The IDF prevent Jews and people with Jewish surnames from entering the mosque. They also maintain a depot, at the far side of the building, where settlers must leave their weapons before entering the synagogue.

For over an hour I was alone in that extraordinary space, its tranquillity so mysteriously unblemished. Then the first local worshippers appeared, soon followed by groups of debating madrassa students and visiting pilgrims led by imams. The welcoming youth, who had remained tactfully in the background while I was alone, identified the arrivals in broken English. Mosques are not reserved for prayer and religious ceremonies; many also serve as multi-purpose social centres.

The settlers’ territory semi-surrounds Haram al-Ibrahimi and, after a close scrutiny of IDs, foreigners are allowed through the barrier. By chance, this being the Sabbath, I had a close-up view of scores returning from their synagogue. Some were in (very large) family groups, some walked alone, still reading half-aloud from prayer books. Most men carried heavy weapons and wore the self-designed uniform of those vigilante units which occasionally clash with the IDF if the latter seem ‘over-protective’ towards Palestinians (a rare circumstance). In general Hebron’s settlers are US-born, with a soupçon of newish immigrants from France. I feigned friendliness: big smile, jolly ‘Good morning!’ Most pretended not to see me though we were within touching distance. Some looked briefly at me with hate in their eyes.