Oldie news hot off the press: A trip to bank on Each month, Margaret Dibben of Money Matters hones in on a pressing money issue in the magazine. Sometimes she demystifies the jargon that comes with finance. What really is an ISA? Is Cavity Wall Insulation a modern dental procedure? Is Legal Tender an Act of Parliament? At other times, she alerts readers to the tricks and loopholes of the world of finance.

Margaret’s June issue column hails the endurance of the note – ‘It still pays to have some cash’ (p94). Long live tangible pennies, pounds and a solid gold coin. Also, Happy Birthday to the ATM, which will be fifty in June!

In the Old Un’s Notes of the same issue, there is an item from Margaret, offering eight readers the chance to visit the archive of Barclays Bank in Wythenshaw, on the edge of Manchester, for free. The two and a half hour tour will be led by a 'group archivist'  and will include a full exploration of the 1.5 miles of shelving that is home to 12,505 volumes, 7,537 photographs, 1,176 films and 609 parchments, all dating back to the 16th century. You’ll even see the first ever Barclaycard, created in 1966.

If you think that this sounds like fun, email editorial@theoldie.co.uk, putting ‘BARCLAYS’ in the subject line, and we’ll select eight at random to come along.

This picture of a youthful Oldie reader was kindly sent in from Graeme McLeod. Is the sprog open-mouthed in eager amazement, or barely suppressing a yawn? Only Gran knows. This junior Oldie certainly has a bright future ahead if she maintains this quality of bedtime reading. 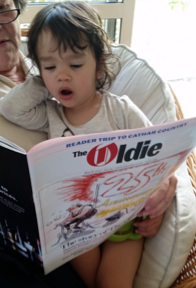