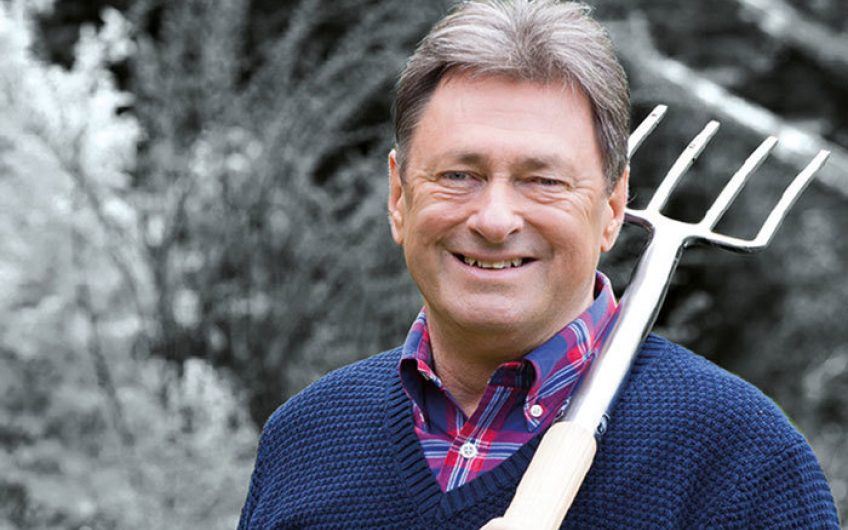 I am a friend of Alan Titchmarsh. He is one of the most gifted and delightful people I know. He writes, he gardens, he broadcasts: he spreads intelligence and happiness wherever he goes. On Thursday - this Thursday, 2 May - Alan will be 70, further proof (if more were needed!) that 70 is the new 39. On Sunday his family gave him a surprise birthday party in Kew Gardens. I’d love to have been there, but I was booked to appear at the Theatre Royal in Winchester that afternoon, so I couldn’t make it, but I was there in spirit, cheering, and I know a great time was had by all. To mark the birthday, Alan’s family and friends are helping plant a tree in his honour at Kew - and I have decided that I am going to celebrate the great man in my own way in my own small garden, with a special Titchmarsh Corner. It’ll look good; it’ll smell sweet; it’ll lift your spirits - all the things that Alan does.

If you decide to follow my example, it’s not difficult. Alan has several plants named after him ~

We can all have Alan Titchmarsh in our gardens! I rather feel it’s what the world needs now.

I have been thinking about people who have plants named after them, not only because of Alan’s 70th, but also because this week I am recording one of my podcasts with another good friend: Susie Dent and the theme is EPONYMISTS - people who have given their names to something, like the leotard and the Wellington boot - e.g. the Hungarian Laslo Biro who invented the ballpoint pen, the American William Hoover pioneered the vacuum cleaner., and, my favourite, the Frenchman who designed the first sandals suitable for the beach: Philippe Faloppe.

Susie Dent is a lexicographer of genius and through out weekly podcast - Something Rhymes with Purple - I am learning a good deal. You can discover the podcast here: https://podcasts.apple.com/gb/podcast/something-rhymes-with-purple/id1456772823

The camellia is a flowering plant commonly found in Eastern and Southern Asia. Swedish botanist Carl Linnaeus (1707-78) named it after the Moravian Jesuit Georg, Josef Kamel (1661-1706), also known as Camellus, who was both a botanist and a missionary in the Philippines.

The dahlia is the national flower of Mexico. It was unknown in Europe till the late eighteenth century when seed plants were sent to Professor Cavanilles, Director of the Royal Gardens of Madrid, who named the plant in honour of Swedish botanist, Anders Dahl (1751-89) who had died two years previously. The plant was subsequently introduced to the British Isles by the Marchioness of Bute. In Britain, everybody pronounces the name of the flower incorrectly: it’s not a short ‘a’ (as in alien), it’s a long ‘a’ (as in ‘dal’, the Asian lentil dish, or Roald Dahl, the author.)

These pretty bright pink flowers, which are often said to resemble ballerinas, are named after the German writer and botanist, Leonard Fuchs (1501-1566) – so here’s another flower whose name we routinely mispronounce. (And, yes, the colour fuschia is named after the flower.)

This evergreen shrub native to Asia and Africa was named the Gardenia by Linnaeus to honour the American physician and botanist with the wonderfully appropriate name, Alexander Garden (1730-1791). Oscar Wilde, who liked to wear a gardenia in his buttonhole in season, observed: “A really well-made buttonhole is the only link between Art and Nature.”

The climbing shrub was named after Dr Casper Wistar (1761-1818). A prominent Quaker and professor of chemistry and physiology at the University of Philadelphia, Wistar is also celebrated for writing the first ever American textbook on anatomy.

The zinnia is name after German botanist, Johann Gottfried Zinn. Zinn, died young but had already made his mark in the world of botany. Carl Linnaeus decided to name this particular plant after Zinn because the way in which it blooms bright but then falls at the first frost echoed the life of the young botanist.

(By the way, I am not an eponymist. Brandreth is a word in the dictionary, but we Brandreths are named after it, not the other way round. Disconcertingly, the Oxford English Dictionary defines a brandreth as ‘a substructure of piles’. I prefer the Collins’ Dictionary definition: ‘a gridiron, trivet or tripod; a wooden frame used to support an object or a structure’. There is a triangular-shaped fell in the Lake District called Brandreth and it is from the place-name that the family name has come.)