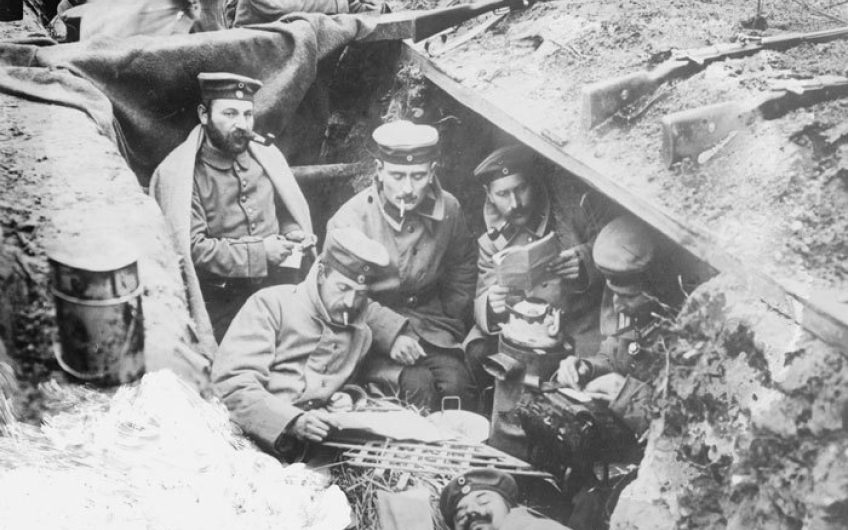 Ninety years ago, on 29th January 1929, a book was published in Germany which has become a British classic. Today, with trouble brewing on Europe's Eastern Front, it feels more relevant than ever.

All Quiet on the Western Front was written by Erich Maria Remarque, a German veteran of the First World War, and it became an instant bestseller. Reading it again, for the first time since my schooldays, it's easy to see why. Written in the first person, in the present tense, in plain and simple language, it's accessible and readable – yet the ideas contained within it are profound.

It purports to be a novel, not a memoir, and, in the strictest sense, it's fiction. However it reads like a confessional. It's no surprise to find that Remarque's own life is mirrored in this brutal, tender book.

For the benefit of anyone who's never read it (or anyone like me, who tends to forget the plots of books almost as soon as they've finished reading them), Remarque's masterpiece follows the fortunes of seven volunteers from the same school class in the Kaiser's army on the Western Front, through the bloody battles of the First World War.

The story is told through the eyes of a studious lower-class lad called Paul Bäumer, whose background is similar to Remarque's. Like Bäumer, Remarque was a bookish boy from a working-class family, who joined up when he was 18. Like Bäumer, he endured the horrors of trench warfare. Like Bäumer, he was badly injured. Unlike Bäumer, he survived.

However, the book's central theme is that anyone and everyone who fought in that war died a little. Their former lives were destroyed by bloodshed. Even the survivors lost something precious which they could never retrieve.

Poignantly (particularly poignantly, since it describes hand-to-hand combat between French and German soldiers) Remarque was of Franco-German origin. He changed the spelling of his name from Remark to Remarque when he wrote this book.

Written in 1927, it initially struggled to find a publisher, but as soon as it was printed, the public lapped it up. Shot through with black humour, the pranks and banter of these youngsters make the warfare even more arresting and disturbing.

An English translation and an Oscar-winning Hollywood film soon followed, but when Hitler came to power, the film was banned and the book was burned. It wasn't remotely anti-German (its German protagonists are brave and decent) but its fearless realism refuted Hitler's myth of a heroic, triumphant new war.

Despite his persecution by the Nazis, Remarque managed to enjoy himself. He had affairs with two of the world's most beautiful women – Marlene Dietrich and Hedy Lamarr. Chivalrously, he remarried his first wife (whom he'd divorced in the 1920s) so she could flee from Germany with him. She followed him to Switzerland, and then the USA, where they then divorced for good.

Though Remarque escaped from the nightmare of the Third Reich, it continued to haunt him throughout his life. During the Second World War his sister, who had remained in Germany, was tried for spreading defeatist sentiments (in reality merely careless chatter) and was beheaded – the fate of traitors in the Reich. At her trial the gloating judge expressed his regret – that her brother was out of reach. Her execution was the regime's revenge for All Quiet on the Western Front.

After the price his sister paid for the publication of her brother's book, it's a tribute that British schoolchildren still read this German Meisterwerk. It's not a pacifist diatribe – it's never pious, it never preaches. In fact, its message is far deeper – that people everywhere are much the same. I couldn't find my schoolboy copy and had to borrow one from my local library. I was pleased to see it has been borrowed countless times.

However, the fact that it's so popular in schools has obscured its enduring value as a book for grown-ups. It moved me immensely when I first read it as a teenager, but reading it again today, with a teenage son the same age as Bäumer, it moves me in a new and different way.

The title of the English translation is beautiful, and has become a touchstone of our language, but re-reading it in middle-age I find I prefer the blunter German title: Im Westen Nichts Neues – In the West, Nothing New.