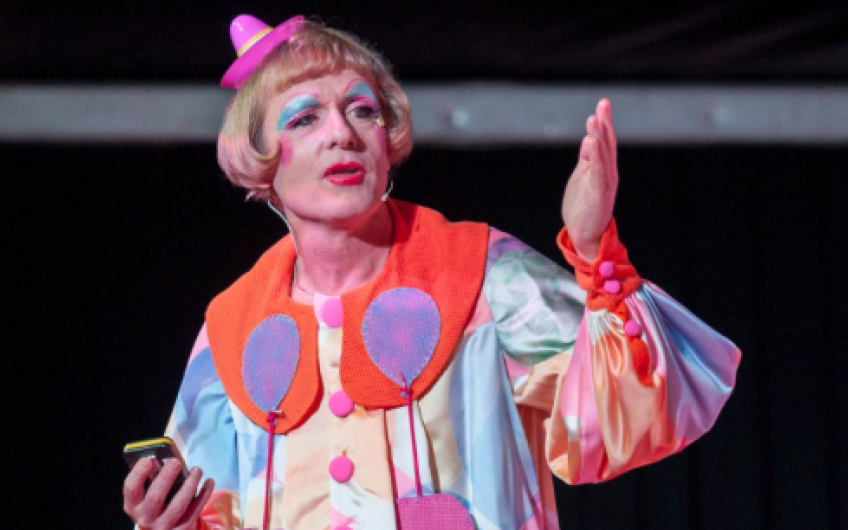 For the festival's third year, Perry is back. And what a year it’s been – both for Perry, and Chatsworth. First things first, Perry drew in the crowds with his Serpentine show, modestly titled ‘The Most Popular Art Exhibition Ever!’ that has, ironically, proved to be just that – the Serpentine’s most popular art exhibition… ever.

He’s also trotted the globe, meeting Brexiters and Remainers and made art of his findings, as well as filming a television series, Divided Britain. What, I wonder, can oldies possibly make of Perry? Equally contentious was the subject of his talk, ‘Democracy has terrible taste’. Earlier this week, he spoke at the Walker Art Gallery in Liverpool on ‘No one is as sexist as a transvestite’. Irony, he’ll happily admit, is at the very crux of his work.

Likewise, why such a big year for Chatsworth? It’s put on its most ambitious exhibition to date – House Style: Five Centuries of Fashion at Chatsworth. Lady Burlington, daughter-in-law of the Duke and Duchess of Devonshire, has collaborated with fashion bigwigs, Hamish Bowles, International Editor-at-Large for American Vogue, and Patrick Kinmouth, fashion curator extraordinaire, to put on a truly ravishing show. The impact is three-fold: the history, the setting (all on display in the 16th century house) and the sequin-spangled garments. Between them, the clothes have been worn by two of the legendary Mitford sisters: Debo Devonshire and Nancy Mitford. Nancy once professed, ‘It’s inexplicable to love clothes as much I do. Especially when I’m not at all vain’. There are clothes belonging to Stella Tennant, the supermodel-racehorse, Debo’s granddaughter; and some belonging to John F Kennedy’s sister Kathleen – ‘Kick’ – who married into the family via William Cavendish, 10th Duke of Devonshire. The ladies of Chatsworth were (and clearly are) a force to be reckoned with. Chatsworth also hosted its inaugural RHS flower show.

Sir Roy Strong, the diarist, writer and curator, described Art Out Loud as ‘the Glyndebourne of arts festivals’ when he appeared in 2016. How true. The team at Chatsworth were scheming a cultural fest to contend with the likes of Hay-on-Wye or Aldeburgh when they decided to put the art slant on the occasion. Only into its third year, how has it managed to attract such artistic luminaries? Sheron Reynolds, the festival’s director, let slip that it’s often not too hard to secure the speakers – ‘The offer of a night in the house, is usually enough to sway’. After all, it’s a house to put even the swankiest boutique hotels to shame. As I was trundling off to catch my train home, the festival’s elite (performers, curators and organisers) were dispersing to ‘get ready’ ahead of the night’s celebrations. One of the rooms in the current exhibition is themed ‘dressing for dinner’ and Lady Burlington commented during her talk, ‘The house does makes one dress up a little in the evening.’ I can only imagine.

A few of the names they lured to Derbyshire last weekend were Tristram Hunt, the Labour MP-turned-Director of the V&A Marc Quinn, the creator of ‘Alison Lapper Pregnant’, the original fourth plinth commission that was repurposed and ballooned in size for the London 2012 Paralympic Games closing ceremony; the glossy fashion designer Christopher Kane; and the arts journalist Martin Gayford, who has recently written ‘A History of Pictures’ alongside David Hockney. Previous speakers have included Edmund de Waal, Tate Director Maria Balshaw and celebrated garden designer Dan Pearson. Chatsworth has artfully managed to curate a line-up with a bit of something for everyone, wherever your aesthetic interest lies. You can get tickets for a particular talk rather than ‘the full weekender’ (which often equates to the odd dud speaker).

As a seasoned regular on the Oldie festival circuit I can vouch that posh oldies may well have found their mecca at Art Out Loud. Flit from the decorative, intimate theatre (like the one in the film of The Sound of Music, where ‘The Lonely Goatherd’ was performed) to the tent on the south lawn. Between talks, stroll in the grounds to the maze, the startling rockery and the classical sculptures, and the fountains, with views of the house. There’s also the current Sotheby’s Beyond Limits sculpture exhibition, showcasing a collection of post-war American art. Truly dazzling surroundings complemented by stimulating (and, thankfully, not exhaustingly political) talks and art from all ages. My day was a whistle-stop tour with a lot to see, and not a lot of time; so I’d recommend making a weekend of it. Anyhow, with any luck I’ll be back next year.