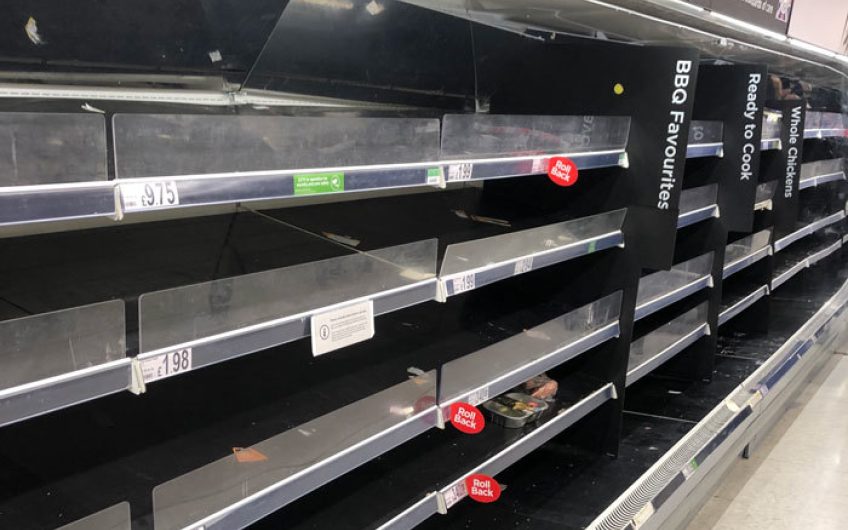 It’s still hard to believe that we are in lockdown. It shouldn't come as any great surprise. Last week, it was just a bogeyman. Then I found myself laughing off the hysteria.

Everyone has their view on the coronavirus: plague; end of days; drama, drama, drama! It’ll all blow over though. Right?

For my part, I knew we were up a creek when I saw the English capacity to queue in an orderly manner die a most undignified death.

Having missed the panic-buying spree of my fellow Londoners, I dutifully rose at 5.30am (funny how, on the first day I work from home, I got up a good three hours earlier than had I actually gone in!). I was praying I’d find some meat in Asda. There was none to be found anywhere else. And I’ll be damned if this apocalypse forces me to go vegan! Do not go gentle into that woke diet, say I!

It’s a vast megastore on par with the hypermarchés of France, where Mum and Dad are weathering the storm. In my dazed state, I make straight for the door.

It took me a good five minutes to realise quite how large the queue was. Families with trollies lined the car park. There must have been three or four hundred people there, some crouching, others leaning on the wall. Most huddled in groups chattering away. Everyone seemed to know each other.

A bulbous growth of loners amassed, an offshoot, from the front of the queue.

Members of the actual queue plead with them to move. Nobody budges – ashamed but too stubborn to lose their spot. Those queuing since 5am begin to argue and shout at the splinter queue.

Two policemen show up. A tall man in an ope, big coat, who clearly sees what is coming, begs them to move the side queue along. The officers promptly toddle off, having achieved much short of bugger all.

Debate continues. But it’s too late.

The doors open and the cracking façade of civil society finally snaps: trollies wielded with spitting fury by old and young charge the front door from all angles. The car park is a no man’s land. Women and men alike shout in drama to their other halves. ‘Leave me – there isn’t time!’ Others roar, ‘potatoes!’. As these piteous yells pierce the morning sky, I think, ‘These truly are the end times!’

I did manage to nip in and grab some chicken thighs destined for a tagine the next evening. With a bit of turmeric and paprika and accompanied by a bed of chickpeas it was à mourir!

It was funny at the time; not so much now.

Clapham, where I live, is quiet. It's usually humming with yummy mummies and the buzz of motorbikes. I don’t hear much today – a few birds, a panting boiler from a few doors over and the rustle of leaves.

As I sit in my garden for lunch, my neighbour, out for a fag break, sidles up to the trestle fence separating our gardens. It hides most of his cheerful grin. ‘Could be worse!’