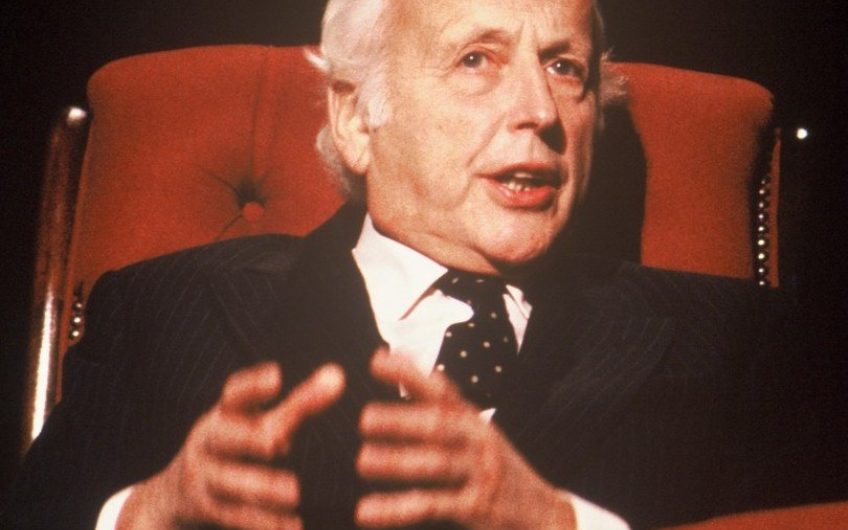 Perry Worsthorne arrived at the 2012 Oldie Awards in a brown trilby with a mauve hatband, a fuchsia scarf, a lavender shirt, cherry red trousers and a navy jacket.

Then aged 89, he accepted his award for Fashion Icon of the Year with a characteristic flourish. “Having failed to become a sage,” he said, “I will now be remembered as a dandy”.

In fact, in the best of his writing, he proved himself a perfect combination of the two, with a large pinch of the iconoclast thrown in.

I always preferred his mischievous diary pieces to his grander political essays. He liked to shock with his contrariness. His mother wrote in her memoirs, “Peregrine was nearly always antagonistic, even at the breast.” Despite his reputation as an Establishment grandee, he could always surprise you with his reckless and limitless capacity for self-revelation.

In one column, he revealed that he had been so irritated by the smell of a Big Mac while travelling on the London Underground that he had sought his revenge by farting in the face of its consumer. A Spectator diary opened with this immortal sentence: “Put on coffee enemas as part of a cure to help me break a hellish addiction to the antidepressant Seroxat, I have accidentally discovered, a bit late in the day for me, that they are a sure-fire remedy for hangovers.”

In another, he wrote of his profligate spending after being told that a TV series was on the cards. Apparently, Darcus Howe, with whom he had formed an unlikely friendship, had phoned him to say that Channel 4 was so pleased with their joint hour-long programme on race that they wanted to commission a whole series.

“Needless to say, my vanity was tickled. Six hour-long programmes on prime time! Perhaps I was to become the second septuagenarian television star, following in the footsteps of the great Malcolm Muggeridge, who also began his meteoric career on the box at a great age. In any case, what a rejuvenating challenge, the professional equivalent of a handful of Viagra pills...I even consulted a publisher about getting a book out of the series and, something I've never done before, persuaded a top television agent to take me on to her books. As to money, that, too, was discussed, with a possible sum of £40,000 mentioned – the equivalent of what I used to be paid by Dominic Lawson for a whole year of writing columns for the Sunday Telegraph. So rosy did the financial prospect seem, believe it or not, that I bought a new Citroen with the, for me, unheard of extra luxury of leather seats.”

Alas, Perry then got a call saying that Channel 4 had had second thoughts, and the project had been cancelled, with not a penny compensation for all his spending and research. “How does television get away with such high-handed and unscrupulous, not to say uncivilised and unmannerly behaviour?” he asked.

It was his use of such words as “uncivilised” and “unmannerly” that led many to see Perry as an Old Fogey. Indeed, I, too, regularly poked fun at him in print along those lines. But, as this passage shows, it was only half the story. He was also wonderfully candid and incautious: I can't think of any other journalist, young or old, who would have mentioned what they were paid, or would have sent up his own mercenary ambitions with such gay abandon.

He liked to play up to his lofty image, and then to place a whoopee cushion beneath it. Having been guyed about his christian name in the New York Times, he began another piece by boasting that the first child born after the pilgrim fathers disembarked from the Mayflower had been christened Peregrine “and a name good enough for the pilgrim fathers ought to be good enough even for the New York Times”.

But he then changed gear, admitting that he had once boasted of his pilgrim fathers connection to General Eisenhower, whom he had had met on the campaign train in the 1952 presidential election.

“After pondering this for a moment, his face broke into the famous Ike smile and he said, “See here, son, I have to tell you that your goddam first name sure never caught on”.”