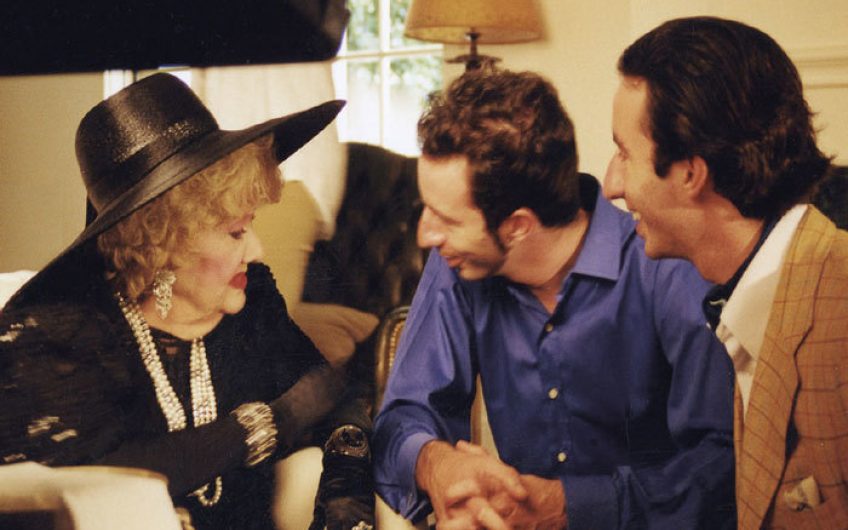 Baby Peggy, one of the last silent film stars, has died at 101. In the 1980s, some young Surrey twins wrote fan letters to other Hollywood greats – and ended up caring for a fading starlet, writes Charlotte Metcalf. Silent film star Anita Page is pictured with Austin (in blue) and Howard Mutti-Mewse in 1999.

The twins Austin and Howard Mutti-Mewse, now 45, led a perfectly uneventful childhood in Surrey. On Saturday afternoons in the 1980s, their father dropped them at their grandmother Violet’s house, where they watched black-and-white Hollywood movies on television. The children started writing fan letters to their idols, beginning with Lillian Gish (1893-1993), whom they saw in the silent film The Wind (1928), and whose address they found in Who’s Who.

So began the unlikely tale of two English boys befriending a generation of Hollywood oldies - a story that is now being made into a film by British producers, Mad as Birds.

Gish put the twins in touch with her friends, such as the comedienne Colleen Moore, who introduced the boys to Douglas Fairbanks Jr. He put them on to Marlene Dietrich, who recycled their envelope, padding it with an old Christian Dior stocking packet to protect the glossy photograph of herself she sent them. Soon more photographs, letters and autographs began arriving – from Bette Davis, James Stewart, Myrna Loy, Lana Turner and Hedy Lamarr.

‘We wrote to the stars about our lives, pets, school projects and our annoying older sister,’ Austin says.

It was the ‘nearly-not-quites’ and the almost famous who were among the most grateful to hear from them. Letters soon gave way to phone calls.

‘They always seemed to call when Mum was serving dinner,’ Austin remarks, ‘and I remember her being cross about toad-in-the-hole going cold because I was chatting to Hedy Lamarr.’

She was even crosser when the boys bunked off school to meet Bette Davis at her London hotel. ‘I’m intrigued to meet the young men who have “turned on” Hollywood,’ she said.

When James Cameron asked Gloria Stuart (1910-2010) to play Old Rose in Titanic after decades away from the big screen, she frequently telephoned.

(The twins sent her Fortnum & Mason chocolates when she was nominated in 1998 for an Oscar as best supporting actress, at the age of 87 the oldest nominee in the Academy’s history.)

A trip to California followed, where the twins’ youth, Englishness and ability to listen to story after story with attentive rapture endeared them to all their pen pals, from Ginger Rogers to Bob Hope. Their new Hollywood friends included Anita Page (1910-2008, pictured), one of the last silent film stars.

In 2014, these friendships became the basis of their book I Used to be in Pictures: An Untold Story of Hollywood, a compilation of the photographs they received as teenagers and the more recent photographs that lend the book its poignant undertone. ‘We were used to being with our grandmother – she was partially sighted and lonely – so we connected with them,’ Austin says. ‘While we were in awe of them, we were also very sorry for them and they had great stories to tell. After MeToo, the next “ism” Hollywood must deal with is ageism. Age made so many stars obsolete in a town obsessed with youth. Being forgotten was an incredibly hard pill for many of the stars – who, let’s face it, had swallowed lots of pills – to swallow.’

The book caught the eye of Tom Perrin, a publisher who commissioned Austin to write a memoir based on the book’s chapter about Mildred Shay, the 5ft-tall actress dubbed ‘the Pocket Venus’ by Walter Winchell, the Hollywood gossip columnist. She was more famous for her social life and affairs than for her roles, though she nearly stole the show playing Joan Crawford’s maid in The Women (1939). Cecil B DeMille was said to have made a pass at her and one of Mildred’s more tragic claims to fame was that Errol Flynn had tried to rape her.

Austin and his girlfriend Joanna, later his wife, spent a period living with Mildred in her decaying, moth-riddled Pimlico flat that, according to Austin, ‘stank of cloying perfume by Giorgio Beverly Hills, cat pee and hair lacquer’.

Austin was working as a Daily Telegraph obituary writer, specialising in – of course – Hollywood movie stars.

‘Don’t tell me about the day job – it’s depressing,’ Mildred used to say to Austin, ‘and I ain’t going no place.’

Stars were not dying fast enough for Austin to make a viable living and Joanna was training to be a teacher; so they were nearly broke and between flats. Mildred was delighted to ensnare her beloved Austin, and the deal was that Austin entertained her while ‘the female’, as Mildred described Joanna, shopped, cooked and cleaned.

Austin’s memoir is an account of that time and leads up to Mildred’s death, aged 94, in 2005. Howard, who lives in Switzerland and works for a trust, corporate and funds business, edited the book on his train commute to Geneva.

‘I don’t like women; they’re jealous of my beauty,’ is how Mildred excused her rudeness to Joanna, though Joanna was big-hearted enough to overlook Mildred flirting with her husband.

‘Honey, you’ve got thin lips,’ she once told Joanna. ‘Max Factor would be able to build them up for you.’

At Austin and Joanna’s wedding in a hotel in the Forest of Dean, Mildred was 94 and dying from a brain tumour but insisted on dancing with Joanna’s brother, to whom she’d taken a shine, even before the bridal couple’s first dance. ‘At one point I went up to Mildred’s room,’ Austin recalls, ‘and I will never forget seeing Joanna in her wedding dress kneeling at Mildred’s feet, helping her into her nightie so she could rest. In those fading moments Mildred told Joanna she was the only girlfriend she’d ever had.’

Austin stayed with Mildred for two years. Towards the end, Mildred was calling 999 ten times a month.

‘Chelsea and Westminster A&E became her new stage,’ Austin says. ‘She used to dress for the ambulance men and they nicknamed her “The Film Star”.’

‘She was like Mae West as she got older,’ Austin says, ‘raunchy, witty and full of one-liners and life.’

Mildred had a daughter, Baby, by her last husband, a British officer she’d married in the war. (He died in 1987.) Baby was born in 1949 and lives in California. She said it was too difficult to come to London to see her dying mother, so Austin took Mildred to California.

‘Mildred knew it was the last time she’d ever see me,’ Austin says, ‘but, when I left, she was at the front door, fully made up in a swimsuit, huge sunglasses and a sunhat. “See you around kid,” she said. She died a few days later.’

Austin’s book Pocket Venus is a tragicomic portrayal of delusion, loneliness and the stubborn, spirited attempt to defy the ravages of age. Although it is chilling in its depiction of Mildred’s weakness and vanity, it is ultimately a heartwarming story about a cross-generational friendship and a young couple overcoming their repulsion and derision to care for and eventually love a frail, lonely oldie.

I get a kick out of Cole