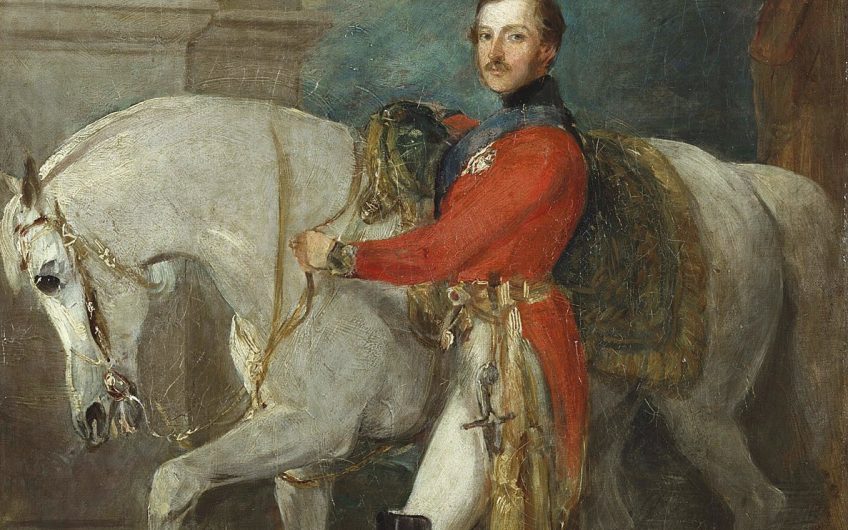 Queen Victoria fell in love with Coburg when she fell in love with Prince Albert of Saxe-Coburg & Gotha, who was born in Coburg 200 years ago, on 26th August 1819. After she married him, in 1840, it became her home from home.

‘Your Majesty, you cannot rule the Empire from Coburg,’ Disraeli told her.

You can see why she was so fond of this corner of Bavaria, in south-eastern Germany. Coburg is a handsome town in an attractive setting, surrounded by wooded hills, and the best thing about it is its four spectacular castles, which played leading roles in her married life, and the life of her beloved husband.

Prince Albert was born in Rosenau, a pretty little castle on the green edge of Coburg. Amid the ruins of an ancient schloss, it was rebuilt in the early 19th Century in fine romantic style. Victoria adored it. ‘I felt as if I should like to live here always, with my dearest Albert,’ she declared. ‘If I was not what I am, this would have been my real home.’ A military hospital during the war and an old people's home thereafter, it’s now a tranquil museum.

When Victoria came to Coburg she stayed at Schloss Ehrenburg, a baroque palace in the heart of town. You can still visit her old apartment, featuring a splendid mahogany lavatory – the first indoor loo on the Continent, reputedly (naturally, no-one else was allowed to use it).

The reason Coburg became so grand was because its ruling family were such shrewd matchmakers. Over several centuries they married their way into virtually every monarchy in Europe, from Russia to Austria, from Spain to Sweden. Leopold, King of the Belgians, was a Saxe-Coburg & Gotha, as were the crowned heads of Romania, Bulgaria, Serbia and Greece.

Victoria’s great-great grandson, His Highness Prince Andreas of Saxe-Coburg & Gotha, still lives in Coburg, in Schloss Callenberg – privately owned, but open to the public. Inside are portraits of Victoria and Albert and their nine children. ‘A little steep, the walk up to Callenberg Castle,’ recorded Victoria, ‘but once you have arrived you can enjoy a nice cup of tea.’

If you fancy an even steeper hike, walk up to the Veste, a medieval fortress which looms over Coburg like the backdrop to a Hammer Horror film. Martin Luther hid away here in 1530, translating the Bible into German, distracted by the squawking jackdaws nesting on the battlements. ‘This castle is full of the devil,’ he moaned (he sounds like a grumpy so-and-so). He was ill throughout his stay, apparently on account of the lousy local wine.

There’s a special exhibition at the Veste this summer devoted to Victoria and Albert, a royal love story cut short. In 1861, Albert died of typhoid, aged just 42. Victoria was heartbroken. She came to Coburg more and more. It was the only place where she still felt close to Albert. In 1865, on what would have been his 46th birthday, she unveiled a statue of him in the market square.

The last time Victoria came to Coburg was in 1894, for the marriage of her granddaughter Princess Victoria Melita to Grand Duke Ernst Ludwig von Hessen. The guest list sums up her central role in this Pan-European dynasty, soon to be destroyed by war.

Alongside her were her son, the future King Edward VII, her daughter Empress Victoria of Prussia, and her grandsons Kaiser Wilhelm II and the future King George V. Also in attendance was their cousin Tsar Nicholas II, later assassinated by the Bolsheviks, during the war to end all wars which tore Victoria’s regal Europe apart.

During the turbulent 20th Century, Coburg fared far better than most of the monarchs it had sired. At the end of the First World War, the last reigning Duke of Saxe-Coburg & Gotha, Carl Eduard (yet another of Victoria’s grandsons), abdicated, and Coburg’s inhabitants voted to become part of Bavaria to the south rather than Thuringia to the north. This was a surprise - Coburg had far closer ties with Protestant Thuringia than Catholic Bavaria.

It was a lucky escape. After the Second World War, when Deutschland was divided between the Allies and Soviets, Bavaria became part of West Germany while Thuringia became part of East Germany. So Coburg ended up in the free west rather than the German ‘Democratic’ Republic.

Surrounded on three sides by the Iron Curtain, Coburg became a backwater. It shared the prosperity of the Bundesrepublik, but escaped its rampant redevelopment. Stuck in a Cold War cul-de-sac, at the end of a dead end street, obscurity preserved its character. Today it’s a pleasant place to stay, a compact town with an architectural heritage that’d grace any major city.

It’s still a bit of a nuisance to get to, but in a way that’s no bad thing. Its remote location has protected it from the worst effects of mass tourism. The nearest airport is Nuremberg, 65 miles away (about an hour and a half by car or train) but you’ll probably find it easier to fly direct to Frankfurt. From there it’s 125 miles (three hours by car or train). If you’d rather avoid flying altogether, you can travel by train from London in around 11 hours, with changes in Brussels, Frankfurt and Bamberg, for £115 each way.

Once you finally get here, there’s loads of stuff to see and do. The fall of the Iron Curtain has reunited Coburg with its Thuringian hinterland. It’s a great base for exploring the quaint towns and rugged countryside of Germany’s historic heartland. Thirty years since reunification, Coburg feels far more connected to Thuringia than Bavaria, as it was before. It’s a peaceful, unassuming place, virtually untouched by the turmoil of the last century. No wonder Victoria felt so at home here. The most powerful woman in the world could wander around Coburg’s rose gardens unnoticed and undisturbed. She could have spent her free time in far more flamboyant places. That she chose to hang out here shows remarkably good taste.

Victoria’s son, Edward VII, ruled Britain and the Empire as a Saxe-Coburg & Gotha but, in 1917, his son George V changed the family name to Windsor to appease anti-German feeling during the First World War. How different the world would be without that war and the revolutions that followed. The Saxe-Coburg & Gotha dynasty couldn’t prevent those wars - indeed, a socialist might say they helped to start them – yet that dynasty gave Europe a cultural unity which it lost forever in the Trenches.

For me, Coburg remains the capital of that lost Europe, a Europe that died on the Western Front and survives only in old photographs – like the photos of that wedding at Schloss Ehrenburg, attended by Victoria, Empress of India, and her grandsons, the future King of England and the last German Kaiser.

Shadows of the Summer of Love