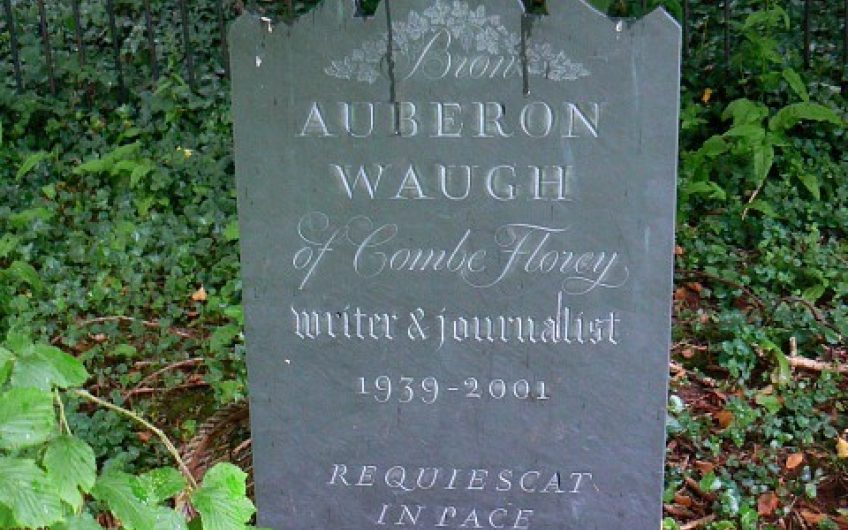 Auberon Waugh would have turned 80 on November 17. In 1991, he was interviewed by a 19-year-old Harry Mount for The Word, an Oxford University newspaper

“I wouldn’t say I took anything very seriously. As a writer, you’ve got to fill space apart from anything else. So you’ve got to invent great passions.”

In a moment, Auberon Waugh laughs off his weekly diatribes in the Spectator and Sunday Telegraph attacking drink-drive campaigners, anti-smokers and the working classes.

For a long time, Waugh has gone out of his way to provoke, not least in his 16 years at Private Eye, writing a diary about the literary and the notorious, putting up some famous backs.

“I used to have a slight nightmare of going into a room and finding all my enemies in it, but really people take an awful lot of things too seriously. It is really bating and teasing. The great art of journalism is to be read and judge what you can get away with, not just in terms of libel or police prosecution, but also in terms of what your editor and your readers will let you get away with. If you just go too far, instead of being amused, they say yuck, euch!”

Although given to offending and basing articles around pieces in the Sun, Waugh laments the way the popular newspapers are going, “They’re getting nastier and nastier. They were always nasty. They’ve just got much more open in their nastiness. The best part of the Sun is that it has got a sense of humour. It’s also got so much viciousness and vindictiveness and specialises in a sort of ghastly hypocritical exposé. I couldn’t give a fuck about these proletarian heroes that it first of all sets up and then tears down. Sometimes there’ll be somebody I’ve never heard of, some soap star saying, “He came 3 times as a rent boy”. I say, ‘Well, fuck that’. Why should I spend my mornings having to read this rubbish? Its power in things like the pop world is quite enormous, but it’s also had quite an effect on Conservative Party policy, encouraging all the vilest and stupidest political reactions; very keen on punishment, thinking ‘no prison sentence has been passed that’s ever been too short’”

Auberon Waugh’s memoirs are to be published this October. “The best half of it, as with all autobiographies, is about childhood, helped by letters to and from my father.”

Talking about his father, Evelyn Waugh, Auberon says, ‘We did not really get on. We had a sticky relationship which worked out in the end. He was very moody and liable to mood swings.” Father’s paunch has been passed onto son as has a penchant for Edwardian 3-piece suits with turn-ups, a hangover from the 50’s when Evelyn had three suits made for his son for Oxford and neglected to account for contemporary fashion. Waugh Jr. still lives with his family in Combe Florey, the 18th century Somerset house bought by his father, but there the father-son parallels end: Auberon Waugh does not seem ‘moody’, rather amiably disarming and content.

As a child, though, Waugh was miserable, turned forever against the public school system by his experiences at Downside, from where he asked to be removed just as Evelyn had asked Arthur Waugh to take him from Lancing.

He stuck it out and before going to Christ Church to study PPE, did national service as a subaltern in the Royal Horse Guards in Cyprus, where he lost a lung, his spleen, several ribs and one finger when a Browning machine gun he was trying to fix started firing bullets into his body. He still receives a military disability pension.

Oxford was not an enjoyable time. “It was rather overshadowed by love troubles. I was so bloody incompetent and young. She was a lovely young lady, but it was unsuccessful. I was rather tortured by it all and left after a year.” Was that it? “Also the fact that, through lack of concentration, I didn’t do any work at all and failed prelims. I would have had to apply to take them again rather ignominiously. Also I’d written a book by then and was really in a position to leave which most undergraduates aren’t.”

Still Waugh was not always sure of a writing career and, for a while - inspired by James Bond – he entertained thoughts of becoming a spy in the foreign office.

“There’s no sense in waiting for a tap on the shoulder. Perhaps you should expose your shoulder. I went round tapping shoulders, but didn’t make it. It can be very boring; stuck behind a desk. Even if you make it, with your cover you won’t appear successful to the outside world, being a very humble First Secretary to an embassy at best.”

Like his father and Paul Pennyfeather, the leading character in Evelyn Waugh’s Decline and Fall, Waugh had a go at prep school teaching, “I actually accepted the job and then they asked me in to have lunch and with the smell of school food and the sight of all these ghastly boys, I got up and ran. I really became a journalist out of desperation, but I now think it’s the only life worth living. It’s all I’m good at.”

“The quality papers have also got much better over the past 25 years. The Independent has been a tremendous shot up the arm. The Times has got better. The Telegraph is a bloody good paper.”

Is it a good career today for the undergraduate fresh from university?

“It’s amazing how few young journalists there are. It could be because we’re more jealous and we’re not letting people through, but the only young journalist I can rate is Craig Brown, and he’s head and shoulders above the rest. Dominic Lawson (editor of the Spectator) and Charles Moore (ex-editor) are good but they’re all in their early thirties. It really is worth going into and the money is bloody good. A straightforward hack on the Telegraph now gets £27,000 on starting off.”

After 25 years of prodigious writing, as political correspondent for the Spectator, diarist for Private Eye and industrious columnist for countless newspapers and periodicals, Waugh has found a solid niche as editor of the Literary Review, a witty weekly covering reviews of the arts with Waugh's poetry competitions extolling John Betjeman and rhyming verse that scans.

Its small first floor office in London’s Soho is a relaxed place: if you ring up the Review you’re likely to get onto Waugh or one of the three pretty girls who put the paper together, sitting on the floor in a pile of cuttings and photos.

Below the office is a tellingly much larger institution, The Academy, an unstuffy drinking club set up by Waugh for fellow appreciators of food, drink and smoking. It is a very convenient set-up for its hedonist proprietor.

“Naim Attallah offered me the Literary Review five years ago and I took it up. As with all my jobs, I’ve enjoyed writing when it has worked.”

“Private Eye clicked but I’d had enough. I thought when I left, that Ingrams [Richard Ingrams, co-founder with Peter Cook and then-editor of Private Eye and the Oldie] would turn on me but then they gave a farewell lunch for me and he announced his resignation - everyone started shouting and breaking down. I think the Eye is now as good as it ever was. Actually there’s far more Literary Review life than there ever was Private Eye life - especially with the Academy, which seems to be the only part of the building that makes any profit.”

The romantic combination in The Academy of hacks drinking with society and literary greats is a throwback to the Soho of the 50’s and 60’s, much of it now lost, when figures like George Melly and Francis Bacon would drink with Jeff Bernard, Low Life journalist of the Spectator.

Waugh slips neatly into the set-up; an astute and funny survivor of and commentator on life, journalistic and otherworldly, for the past 25 years.

Auberon Waugh's autobiography Will This Do? is published by Arrow Books