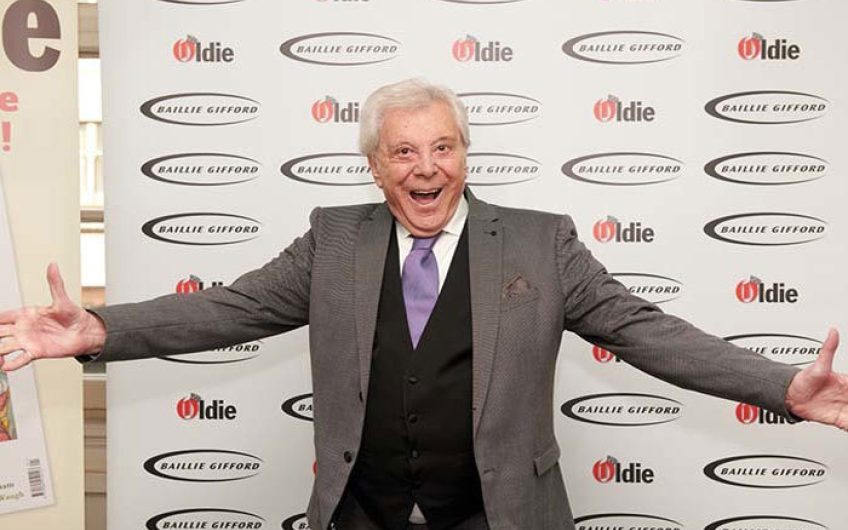 According to Richard Ingrams, founder of this magazine, to win an Oldie of the Year award, you can’t simply be an elderly achiever. You also need to show that you still have ‘snap in your celery’.

Yes, ladies and gentlemen, it’s Lionel Blair – not (as once reported) Tony Blair’s dad (though both are tall, slim and seemingly permatanned), but a happy hoofer, a choreographer, actor and entertainer, who got his prize quite simply because, in a dark world, he glows.

Lionel’s recent TV credits include a stint on Celebrity Big Brother in 2014 and being part of a posse of game old codgers sent out to India for The Real Marigold Hotel in 2017 (as well as a heroic off-screen moment a few years before when he rescued a man found hanging by his fingertips off the edge of a Blackpool pier), but his toe-tapping career stretches back morxe than 70 years.

He was born Henry Lionel Ogus, in 1928, in Montreal, the son of Russian Jewish emigrés Myer Ogus, a barber, and his wife, Della Greenbaum.

They brought their boy to London in 1930 and changed the family name to Blair. Lionel’s sister, Joyce, arrived in 1932 and, within a few years, encouraged by their parents, the pair of youngsters saw themselves as England’s answer to the world’s most famous brother-and-sister dancing double act, Fred and Adele Astaire.

The youthful Blairs gave their first performances to captive audiences, singing and dancing in London Underground railway shelters in the early years of the Second World War. As the bombs fell, Lionel and Joyce were the toast of Manor House tube station on the Piccadilly line. When their dad died in 1944, the children took to the professional stage to help support their mother. Joyce made her first paid appearance in J M Barrie’s Quality Street at the Embassy Theatre, aged 13. Lionel, aged 15, stole the notices as one of the juveniles in a regional tour of Lillian Hellman’s anti-Nazi drama, Watch on the Rhine. By 1944, he was walking on in Shakespeare at the Memorial Theatre in Stratford-upon-Avon.

As he reached his twenties, he realised that dancing was his forte and turned himself into a choreographer and song-and-dance man. By the 1960s, he was turning up in movies (The World of Suzie Wong, The Cool Mikado, A Hard Day’s Night) and becoming a household name, appearing with his own dance troupe on assorted TV variety shows. He knew he’d made it when his very name entered the language: in cockney rhyming slang your flares are known as your Lionel Blairs.

I first encountered him 50 years ago, at one of TV cook Fanny Cradock’s Christmas parties. It was 1969 (Butch Cassidy and the Sundance Kid was the film of the year) and Fanny (a glorious cross between Mary Berry and Jeremy Clarkson) had invited a host of stars of stage and screen to her Hertfordshire home – including Lionel Blair. One wag, spotting Fanny and Lionel together, quipped, ‘Oh, look, it’s Butch Casserole and the One-dance Kid.’

Lionel, of course, was an ace choreographer who worked with all the greats (Sammy Davis Jr was his favourite), but he made his mark not so much because of his dazzling dance routines but because of his effervescent personality. Lionel Blair sparkled and, as a consequence, became as employable out of his dancing pumps as in them. From the 1970s onwards, if you were producing a TV chat or game show and you needed a guest with guaranteed fizz, you booked Lionel Blair.

From the 1970s to the 1990s, he was the linchpin of Give Us A Clue, as one of the team captains in the television version of the Victorian parlour game charades. That’s when I got to know him. I don’t think that I had ever met anyone who so bubbled with energy and positivity – or was so in love with showbusiness.

I assumed he was gay. He put me straight, explaining that people often seemed to get that impression because he was so flamboyant. In fact, he told me, he was happily married. He still is and has been for 51 years. He has three children and three grandchildren, and the very mention of them brings happy tears to his eyes.

Lionel is not averse to shedding a tear. I recall being a guest in an episode of Give Us A Clue on 22nd June 1987, the day Fred Astaire died. The news reached the studio during the recording and Lionel, wearing his great big showbusiness heart on his sleeve, immediately dissolved into tears. Overwhelmed by the passing of his childhood hero, he fled the floor and took refuge in his dressing room.

Eventually, he emerged, of course, puffy eyes restored to glory with an extra coating of slap, apologised profusely and said, to a crescendo of audience applause, ‘The show must go on.’