This show looks at the Mansion House Square site in the City of London, and asks what might have been.

Number One Poultry, Stirling’s 1997 post-modern Battenburg cake in the City was built only after a thirty-year battle.

In the early 1960s, the conservation site was primed as ripe for the UK’s first Mies van der Rohe building. The modernist supremo, famed for his European avant-garde masterworks as much as his megawatt skyscrapers, was commissioned by Lord Palumbo, then just 27, for the job. The initial designs were true to form: grand, rectangular and clad in bronze. The building would soar to 88.5m – 30m above regulation height – dwarfing its Victorian neighbours, as well as the 17th-century baroque church of St Stephen Walbrook by Christopher Wren.

The designs were too much for the British public to bear. ‘Mies is great. London is greater!’, ‘Let Poultry Live Again’ and ‘Give these Vigorous Victorious Buildings a Chance’ read the propaganda posters commissioned by Save Britain’s Heritage.

Philip Johnson, an early disciple of Mies’s, felt the design was ‘plucked off the building conveyor belt’, a bland rectangle and part of a succession of ‘sons of Seagram’, none of which lived up to the original Seagram building in New York. Prince Charles had the last word, describing the tower as ‘a giant glass stump, better suited to downtown Chicago than the City of London’.

In 1985, planning was denied and Palumbo passed the commission on to James Stirling Michael Wilford Associates. James Stirling had years before praised Mies's ‘box on stilts’ design as an ‘outstanding expanse of progressive modernism', not anticipating he’d later land the job himself.

Stirling worked in a very different way to Mies; known as the ‘magpie’, he would pluck ideas from within his practice to bolster the final design. Mies’s work was more about tangible model-making, whereas Stirling made painstaking pencil drawings with meticulous shading and spacing. These different ways of working are clearly displayed.

By 1997, Number One Poultry was complete. It continues to be met with derision. Prince Charles said that it resembled 'an old 1930s wireless'. It was included in Time Out's 2015 'Worst Buildings of the Year'. I disagree. I think it is London's greatest example of post-modern architecture and adds to the glorious variety of architecture in our capital today.  Last year, it was granted Grade II* listed status, the youngest building to be recognised in this way; a testament to its enduring importance. There’s a certain irony that listed Victorian buildings were torn down to pave way for a modern building with a higher listing.

The exhibition does not seek to pass judgement on which is the better building; you are left to draw your own conclusions. It simply tells a comprehensive and impartial story with a fascinating range of barely seen architectural drawings, models, letters and photographs lent from the private collection of Lord Palumbo and the Number One Poultry archive. 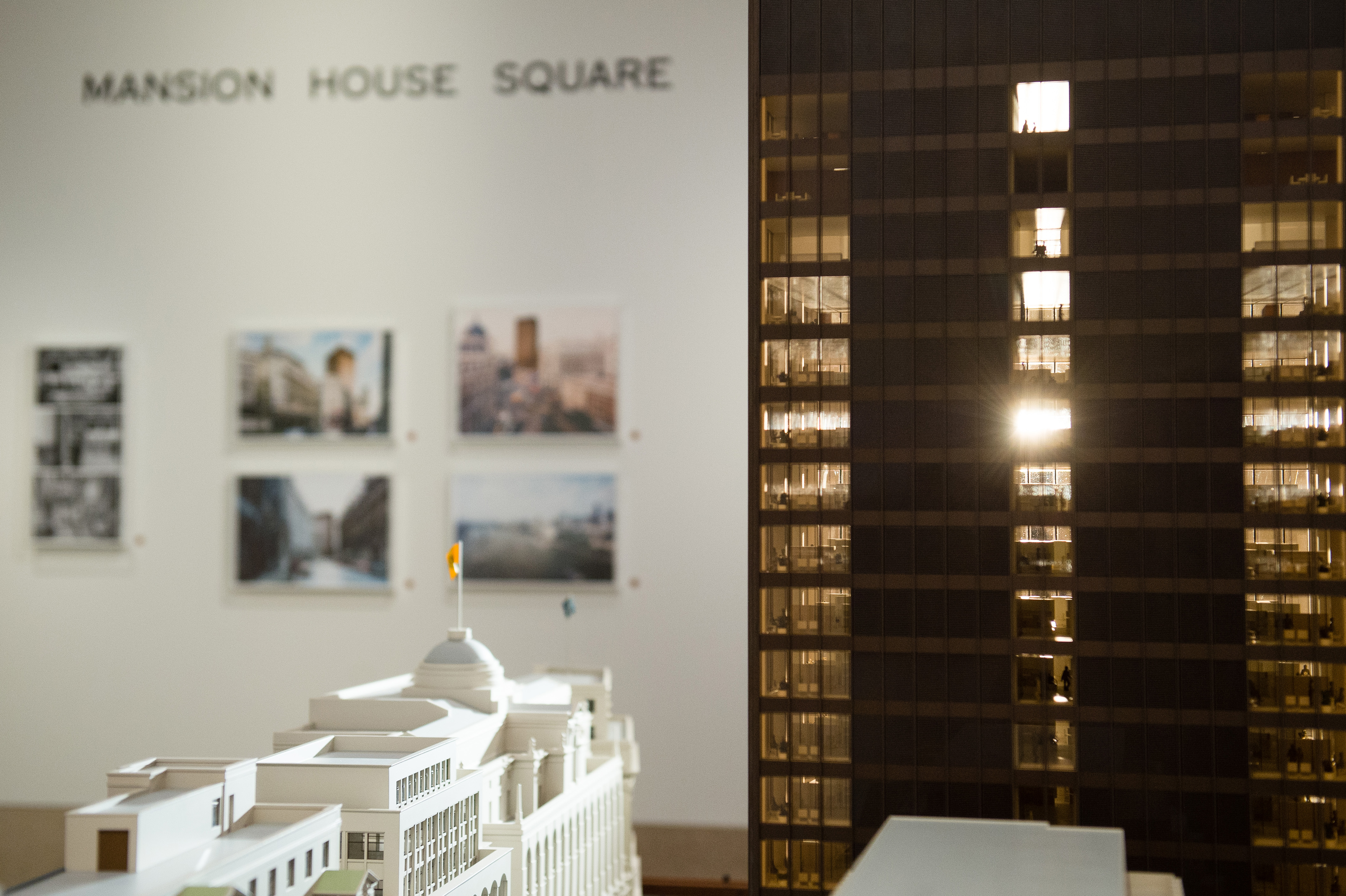 RIBA has some rather fantastic events lined up to complement the exhibition.
My pick of the bunch:

*Less is more. Less is a bore. An evening of talks, events, performance, film and music that cashes in on Mies's renowned phrase. The evening will explore high modernism, post-modernism and associated design movements, such as the International Style, Bauhaus and Memphis Group.
Tuesday 28th March, 6–10pm
Free of charge and on a first-come, first-served basis unless stated otherwise

*London’s high-rise future: exhilarating or alarming. With more than 230 high-rise buildings (of more than twenty storeys) planned for London, would better quality towers have been built in the City if the Mies scheme had been built? What is the future of London’s skyline and its impact on the ground level?’
Tuesday 9th May, 7pm
£9.50 standard; £6.50 RIBA member, student, friend

Keep an eye, too, on events hosted by the Twentieth Century Society.