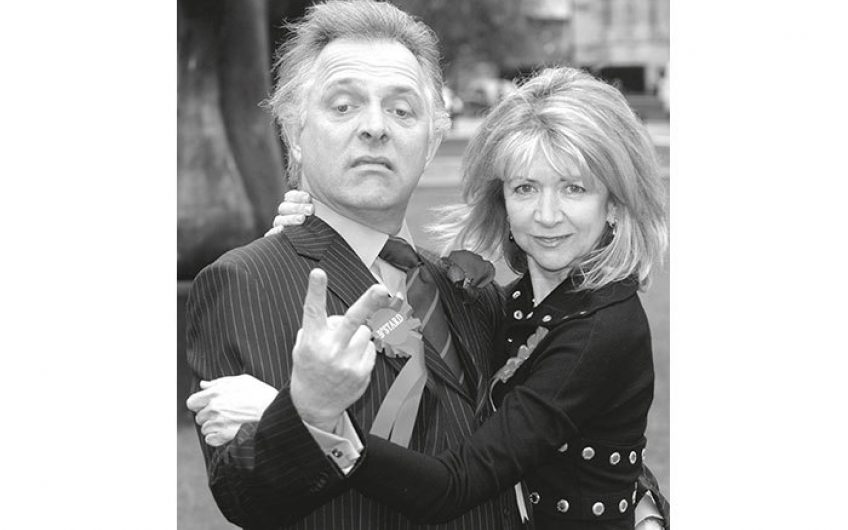 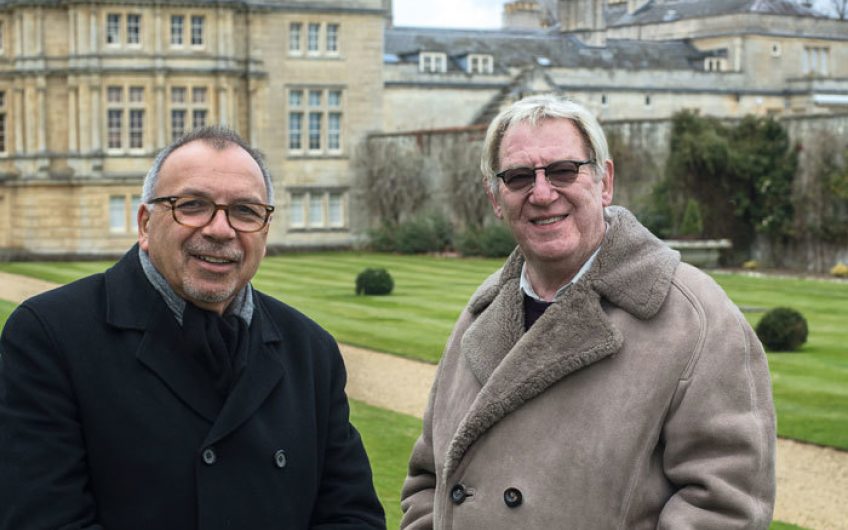 The great Laurence Marks and Maurice Gran, 71 today, tell Valerie Grove about 40 years of comedy-writing and the monster they created for Rik Mayall

What would Alan B’Stard have made of the current Brexit chaos? Alas, since the death of Rik Mayall, who played the incorrigible Tory MP in The New Statesman from 1987 to 1992, we shall never know. Even though his creators, Laurence Marks and Maurice Gran, have flirted with reviving him, they’ve decided it’s not going to happen.

‘Television doesn’t deal in satire any more,’ says Gran. (And no actor would follow Mayall.)

So we’ll have to make do with B’Stard in a box set, to remind ourselves how horribly close to present-day politics was B’Stard’s House of Commons – backstabbing, self-serving, opportunistic, unprincipled and vicious.

I sat betwixt Marks (tall and pale) and Gran (short and dark) at an Oldie lunch – they’d come, as readers and Arsenal fans, to hear Tony Adams – and got a double dose of ‘Lo and Mo’, their email name. Their lives have been entwined for 44 years, ‘longer than most marriages’. Barry Cryer noticed that they even share a credit card.

Marks is 70 on 8th December. Gran turns 70 next October. Every day, Mo moseys over to Lo’s place, Sherborne House, Gloucestershire, and they work (talk) all morning. ‘Or I chat; he puffs,’ says Gran, as Marks is a pipe man. A break for a posh pub lunch or a game of tennis – they share a personal trainer, too – then back to work again. Lo drove me there from the nearest station in his Merc, numberplate ALOMO.

As we passed the turning to Swinbrook, Oxfordshire, where the Mitfords lie in the churchyard, Marks told me he plans to be buried there, ‘alongside Nancy, Diana and Unity’. Shock! Is this a joke? When Lo and Mo were writing their excellent 1998 drama series about Sir Oswald Mosley, the beautiful Diana declined to meet them. So they had no chance to tell her that Lo first met Mo (aged 11) at the Finsbury Park Jewish Boys’ Club in 1960, ‘when there was a resurgence of Mosley’s Blackshirts’. Look on Lo’s burial plan as a posthumous snook-cocking.

We drew up at Marks’s stately pile.

Marks lives in one of five state apartments: he says the council flat where he grew up could be fitted twice into the sitting room. Here we sit, surrounded by paintings and books. Its towering mahogany bookshelves he got half-price, after betting the antiques dealer they would fit. Gran and his wife, Carol, live more modestly in Cheltenham. They have two children; so the childless Marks – who also owns a place in Switzerland – is richer. When Gran arrives, coffee is served by Marks’s German wife, Brigitte, a former actress. They met in 1984 on the set of Auf Wiedersehen, Pet in which she played Dagmar, the classy woman in the building-site office.

In a world that’s lost Galton and Simpson, and Muir and Norden, Marks and Gran belong to a dwindling breed. Their octogenarian friends Dick Clement and Ian La Frenais (of Porridge fame) flourish in California.

Their crucial encounter was Marks’s chance meeting on a train with Barry Took, co-writer with Marty Feldman of Round the Horne. Could they send him some of their sketches? Took saw at once that they had something, and got them to write routines for Frankie Howerd. There followed a seamless succession of sitcoms: Birds of a Feather, Shine on Harvey Moon, Goodnight Sweetheart....

And then The New Statesman.

Nobody would have pictured Rik Mayall, the frantic Young One, as a Tory MP. But, in 1986, Mayall asked Marks and Gran to write him a character ‘with my worst characteristics – depraved, mean, violent, cowardly, greedy’.

‘You want to be a Conservative backbencher?’ said Marks. (Marks is a card-carrying Labour man who voted twice for Corbyn and, yes, has confronted him about anti-Semitism.) ‘Rik knew nothing about politics, which surprised us, but he loved the idea of “Alan Bastard”.’

Yorkshire TV balked at ‘Bastard’ – but didn’t mind ‘B’Stard’. When pitching, the writers sent in B’Stard’s Who’s Who entry: recreations ‘droit du seigneur and crushing the poor under my heel’. A studio was booked before they’d even written an episode. (They’d just been to Hollywood and were hot stuff.)

Mayall amazed everyone: so handsome, so cute in a suit; such a fine actor. And B’Stard took off instantly. Edwina Currie noted that YCs began aping him: ‘The suits got slicker; the hair longer; the smiles wider.’ Next time a Tory MP was caught cheating on his wife, the Sun headline read, ‘What a B’Stard!’

B’Stard’s Yorkshire constituency ‘Haltemprice’, then defunct, is now the seat of David Davis. But it was Michael Portillo, Marks’s local Southgate MP, who gave them background detail, and showed them round the House. ‘A lovely man,’ says Marks – and a grammar-school boy, unlike ‘Piers Fletcher-Dervish’ (named after a firm of solicitors) who was based on ‘all the dickheads we’d met who went to public schools, especially Eton’.

Some of B’Stard’s more outrageous violence was Mayall-invented. How heartlessly we chortled to see him kicking the Zimmer frame out of an old lady’s grasp. But there was an outcry when he tortured Fletcher-Dervish’s teddy, snipping off his ears and setting him on fire.

Audience laughter sometimes got so out of control that the warm-up man had to appeal for calm. I shan’t forget the scene where Alan tapped on the door of No 10 late one night. Margaret Thatcher’s voice was heard from inside, whispering, ‘Cecil?’. Alan murmured, ‘Should I use your back entrance?’

Or the darkened hotel room, where his voice was heard asking, ‘How was it for you?’ and getting the response ‘How was what?’ Another day, Alan was on the phone telling ‘Squidgy’ not to keep on ringing him at the office. How did they get away with it? ‘We had very good lawyers,’ says Gran.

In their previous lives, Gran was a civil servant and Marks was a journalist on the Sunday Times. One day in February 1975, 26-year-old Laurence Marks was sent to cover the Moorgate tube disaster which killed 43 people. A day later, he discovered that his father, Bernard, was among the dead. Harry Evans gave him a year to investigate what happened, ‘which proved a therapeutic exercise’. Talking to the bereaved, he believes, exorcised his grief.

When they recorded Desert Island Discs (four discs each), Marks was about to have a prostate operation. For his luxury, he asked, ‘Can I take my catheter?’ His chosen book would be one he’s never read: his diary.

Latest projects include a musical of Goodnight Sweetheart, and maybe a transgender play. They must contend with that oldie hazard: commissioning editors younger than you. ‘Teenagers just down from Cambridge who tell you how to improve your script,’ says Gran.

How I wish we still had B’Stard. There haven’t been many laughs in Brexit so far. In 1992, we heard him proclaim, ‘England is the greatest country in the world… the nation that produced Shakespeare, Dickens...’ while Europe was ‘the continent that produced Napoleon, Hitler...’