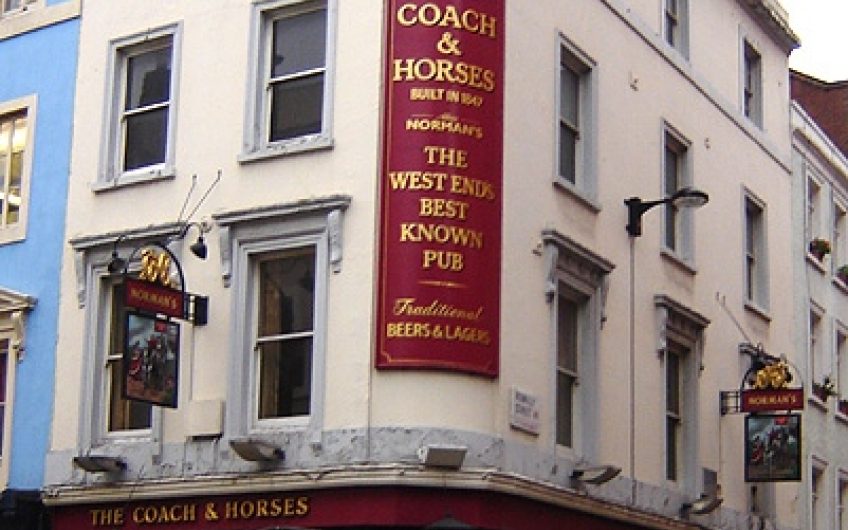 The telephone rang 3 times. It was Lyndsey our unflappable receptionist sounding hysterical.

‘There’s a tramp down here in a raincoat demanding money. Please hurry’

I ran downstairs to find a man standing by the switchboard, looking faintly amused.

‘No far too early - would you like a coffee?’

‘Christ, no - I need a bloody vodka. Go and get the pettty cash tin’. I went upstairs, grabbed the tin and returned to reception hoping there would be a few pounds left inside.

“£30 will do. Tell Jonathan I was here. Thank you Jane” . And with that he left, and headed down Portobello Road in search of a pub. It was market day.

As I turned to go upstairs Lyndsey shook her head.

“That was no tramp, that was Jeffrey Bernard”

Jeffrey was a contributor for EVENT magazine. It was a listings magazine owned by Virgin and they were keen to close it down. I’d started out as secretary to the publisher, then was moved to the Advertising Department which was run by a mad woman.Luckily I was rescued and sent to the Editorial Offices where I worked as researcher and assistant to the Assistant Editor. My desk was a space on the sofa by the switchboard which I frequently had to vacate whenever visiting writers or rock musicians visited. Virgin had a music company called Dindisc located on the first floor.

Editorial staff were fired on a weekly basis. I’m sure the only reason I remained was because I could work the electric typewriters. They were state of the art. The writers hated them. They wanted small manual ones. When a Virgin minder arrived and started to remove chairs to save money, I suggested he take the new typewriters instead.

After a few weeks the joint Editors left and Jonathan Meades stepped up to be the new Editor. It was an inspired choice. He enticed new writers on board including Jeffrey Bernard , Martin Tomkinson, Nicholas Coleridge, and Alistair Scott and set about making EVENT the magazine he wanted it to be. I too had a new job. I was Jonathan’s secretary/editorial assistant and sat opposite him in a small office. I loved it.

One such writer, a charming Frenchman Etienne Duval arrived with sheets of paper titled ''The French in London’ – it was a mess - bits scribbled out, big arrows pointing to new paragraphs and strips of paper stapled over old copy. When Jonathan questioned the copy, Etienne smiled.

‘I thought Jane could re-type it’ and I did.

‘How do you know him?’ demanded Jonathan

Jonathan had little time for basic administration and I quickly learnt how to forge his signature.

Jonathan was an expert on French food, particularly Offal, but there was one dish I, and I alone was asked to make it. No-one else could master the technique. A fried egg toasted sandwich.

Timing was the key. You turned on the toasted sandwich maker and when hot enough put a slice of buttered bread on the top, followed by a raw egg, another slice of bread and slammed down the lid.

‘Are you sure you spent a year working in the Savoy Hotel kitchens?’ he would ask while devouring the sandwich. I did, but that’s another story.

Jonathan sent Jeffrey Bernard to interview Haircut 100 and on a cross channel ferry to France. I remember writing a letter to boost the sparse correspondence we received for the letters page.

“Dear Sir, whatever happened to Jeffrey Bernard? Did he ever come back from Boulogne?

Getting copy off Jeffrey was difficult. I would ring the Coach and Horses regularly and pester Norman.

'Of course she does, you’ve just told her.'

One Wednesday afternoon, I was sent to the Coach and Horses to pick up Jeffrey’s copy with strict instructions not to return without it. On arriving Jeffrey waved me over.

“Norman, get Jane a large G’n T. Jane come and sit next to me and tell me what to write”.

I went pale “It’s press day. Haven’t you written it yet?”

“It will be ready by the time you finish your drink.”

Hours later clutching the copy, I rolled into the Portobello Road office to be confronted by an angry

Editor: "I do not pay you to get drunk with Jeffrey Bernard. He can do that on his own.”

I was never sent again despite Jeffrey’s pleas that it would be easier if I went to Soho to pick up his offerings armed with petty cash.

My meeting with Silvio Berlusconi was quite different. I didn’t get drunk with him or attend a

Italy was hosting the NATO conference. The BBC Foreign News Desk rang and asked if I could run the Rome Bureau for a couple of weeks. The night before the conference the cameraman and I went out to try and film extra material for the Nine O’ Clock News.

A small group of cameramen were waiting for President Bush to arrive. We duly joined them. I was holding the sound boom and was told to keep it steady as we needed clear sound bites.

A car drew up and Silvio Berlusconi got out and came over. The group became very excited.

As he started to speak a second car screeched to a halt and a cameraman and journalist jumped out and ran over, eager to record what he was saying. We were a tight little group and there was no room for the late arrivals. That didn’t deter the cameraman. He roughly pushed me out of the way and he and the journalist took my place. The sound boom and I fell to the ground, the sound boom rolling down the slope. I was mortified.

Berlusconi clicked his fingers and two of his entourage came running over. One pulled the cameraman out of the group, the other helped me up then slowly ran his hands over my body (as only an Italian could) paying particular attention to my chest and bottom to ensure nothing was broken.

Then and only then he guided me back to the group where he positioned me beside the Italian Prime Minister. Berlusconi held my hand and asked me if I was ok. Speaking in my best Italian I replied I was fine and thanked him for his kindness. He smiled and continued the impromptu presser; by now I was holding a smaller microphone inches from his lips. I paid little attention to the content. I was transfixed by his stacked shoes and his hair – his roots needed touching up.