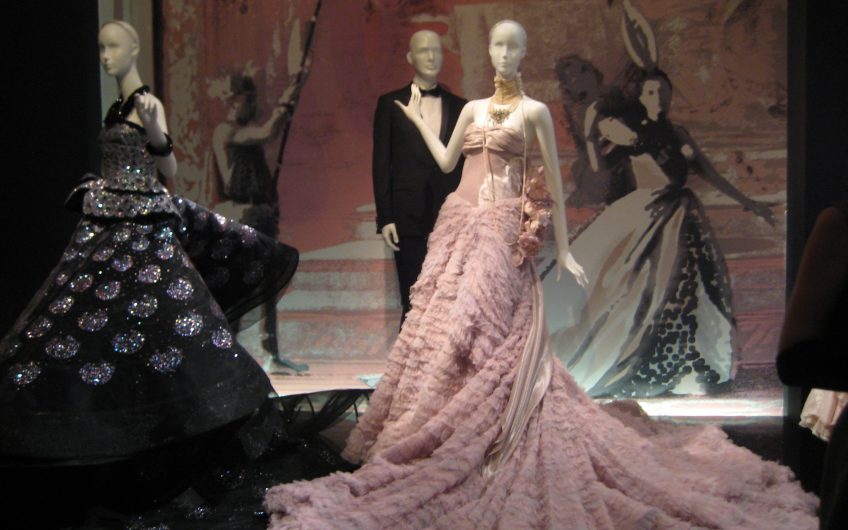 It's just been announced that this year's Dior exhibition at the V & A was the most successful in the museum's history, with 600,000 visitors. Nicky Haslam can see why.

One night, not long ago and not late, after a dinner party at Claridge’s, I walked down Bond Street.

The air was positively balmy for early December. The Christmas lights were already blazing, the shop windows gilding the pavements. But there wasn’t a soul around, no traffic cruised this glittering parade and, despite the brilliance, it seemed strangely eerie.

Had it been a frost fair on the 18th-century Thames – or Istanbul or Rome now – the place would have been thronged, with stalls wafting the aroma of sugar and spice, and the pungent steam from coffee-sellers. Once in a blue moon, the shops in streets like this are open at night. Why not more often? Why the gap between delightful commerce and drear commercial? Surely these lights, their lure, are more seductive at night instead of sullen daytime? This fabled nation of shopkeepers should burn the midnight oil. And sell some wearable clothes.

I looked at every shop, from the grand brands’ megaglitz to those Mayfair-Mafia-laundered boutiques with weird names, studying each fashion-filled window.

Fashion? There seemed no such thing: no original look; no new style; no cut above the rest.

Everything was a total mish-mash. The past season’s excess was recycled in a jumble of inappropriate materials, lengths, cut and colours, with lacy, froufrou’d, faux-furred additions, deemed suitable even for breakfast at the Wolseley, or all-over sequined things more garish than the décor at Annabel’s.

It all went downhill when magazine editors decided their spreads had to tell a story and loaded the photographs with extraneous and wildly diverse ‘information’ in detail. This demise was furthered when fetish and underwear broke out of the closet. While punks did the leather-rubber-bondage thing with outlaw humour, the sleazy daintiness of the sex-shop version becoming mainstream sounded the death-knell of chic, as well as killing any mystery.

Sexiness was now in your face; no longer gently hinted, as previously. I once asked Lady Diana Cooper what had been the most shocking fashion innovation of her lifetime. I expected her to say something along the lines of trousers for women, or the bikini. She answered, ‘Without question, it was when stockings, which were cotton, became skin-coloured rather than black or white.’

Brand designers have had it their way for too long. Relying on accessories, scent and the Middle East for sales, their so-called creations are aimed solely at news coverage and red carpets.

There are a handful of younger – usually British – designers who make wearable things. But, as one of them recently sourly remarked, these days anybody can design a dress – and more and more are being ordered from ‘amateurs’ whose friends admire their style.

Maybe all this has come about because of the complacency of two generations having no direct involvement in war. Such events have always radically changed and sobered fashion.

The bustled excesses and boned constrictions of Edwardiana were swept away by the slimmed-down style of the 1920s and the orientalism of Diaghilevs ballets; followed by the languorous elegance of the 1930s, largely influenced by Hollywood. The privations of the Second World War ushered in decades of elegance, exemplified by Parisian, Roman and to some extent, London designers.

All these designs had the dashing glamour of uniforms – now too dangerous to wear in public for fear of political associations – as a foil, and the whites of many new sports. There was also inspiration in national costume. The 1930s loved the chic of Austrian ‘tracht’ – or traditional costume.

The Victoria and Albert Museum has just held its most successful exhibition ever – of unarguably the most famous of these great early designers, Christian Dior (1905-57). His 1947 ‘New Look’ is surely the memorable ‘label’ attached to any collection ever shown.

Dior and his contemporaries perceived that, after the privations of wartime and the making-do with hard fabrics giving harsh outlines, women would embrace a completely different silhouette: longer, flattering, fitted and feminine.

Other designers, such as Jacques Fath (‘Rich women dress at Dior; smart women dress at Fath’ was a mantra of my youth), had a more sculptural conception of their creations, simultaneously adding subtle frivolity.

Their approach to clothes was the polar opposite of the ‘fairy princess’ hodgepodge now appropriate for any time of day and night. Maybe there would be fewer small boys confused about their gender if, instead of this princess look, a well-cut ‘coat and skirt’ was the norm.

Appropriateness may be the problem. In Dior’s book, the time of day suggested the appropriate style of dress. For him, morning meant simple; lunch a little dressier; afternoon sportive; black-chic for cocktails; bare shoulders for evening.

Clearly such definitions no longer apply. Still, the V & A exhibition was an eye-opening exemplar of good dress – the antithesis of those hideous Bond Street displays which wrongly assume that anything, indeed everything, goes.

W B Yeats and the Protestant phoenix