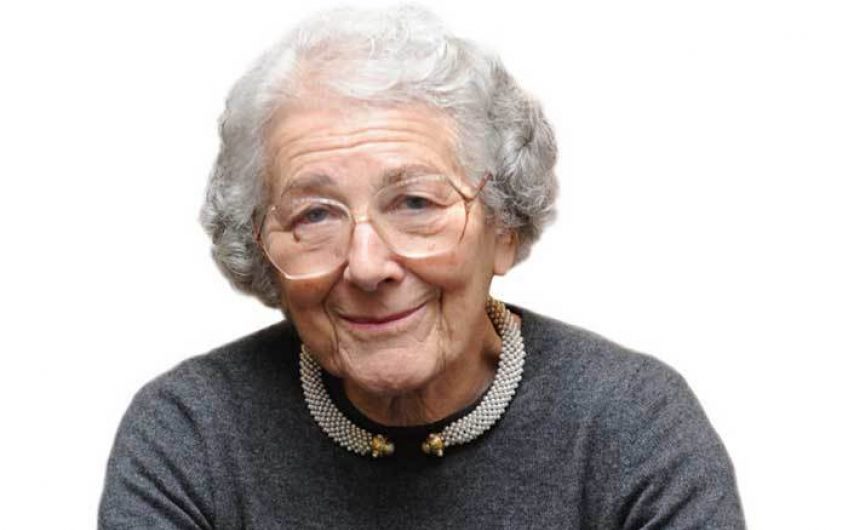 When Hitler stole Pink Rabbit— by Judith Kerr, the great children's book writer - has been made into a film. Valerie Grove writes about meeting her

When Judith Kerr appeared by chance at an Oldie event in September 2018, we were all quite struck by her: so chic in her black trouser suit; so amazingly spry. Spurning an offered cab, she strode off to Piccadilly Circus to catch the tube home to Barnes. At 95!

It was David Wood, the children’s playwright, who brought Kerr along. He was addressing us about the film If.... in which he starred 50 years ago. Coincidentally, it was also the 50th anniversary of Kerr’s first book The Tiger Who Came to Tea, Wood’s stage version of which has been running for 10 years. Kerr’s story of Sophie and her mother and the tiger who eats everything in their kitchen, obliging them to go out to a café for supper, is revered by three generations. In the world of children’s books, The Tiger has classic status.

‘It seemed a mad idea,’ Kerr said, ‘to make a 55-minute play out of it. And yet, whenever I see it in the theatre, 200 three-year-olds are watching enraptured, and there’s not a sound.’

It may be slightly exasperating always to be asked about The Tiger, and not about her dozens of other books, but then she recalled how lucky she is. Her late husband, Nigel Kneale, was similarly linked irrevocably with his terrifying trilogy of Quatermass TV serials, despite being a prolific dramatist and screenwriter: he scripted Osborne’s Look Back in Anger and The Entertainer, and staged Orwell’s Nineteen Eighty-Four.

The latest Judith Kerr picture book, just out, rather alarms me. In Mummy Time, the mother sets off to walk in the park with her darling blond toddler, all energy and curiosity. But the minute they are outside, mummy rings a friend on her mobile and is soon sitting on a bench chatting about a recent party, yatter yatter yatter...

Meanwhile, the sweet boy toddles off and befriends a St Bernard dog, picks up (and eats) bread scattered for the ducks, falls headlong into the lake, is mercifully rescued by a swan... and, after many misadventures, is delivered safely, by the St Bernard, to mummy.

I am aghast at her negligence, and remark how different she is from the attentive, homebound 1968 mother in The Tiger. Of course Kerr is pointing out the truth as she observes it today – young mothers are forever on their phones and can’t possibly see what their children are getting up to.

‘But I am sure they are very good mums at other times,’ Kerr said, as one who seeks the best in people. ‘And motherhood can be wildly boring sometimes,’ she reflected, adding, ‘I’m sure I would have been delighted to have a mobile phone.’

Her own full-time mothering of Tacy and Matthew turned her into an author. They would walk in Holland Park where peacocks slept in the trees. At dusk, the ‘All out’ men arrived at the gates, shouting ‘All out!’ Tacy – now a wildlife artist – adored being out after dark; hence the café episode in The Tiger. Kerr wrote it down exactly as she’d told it – ‘many, many times’ – to Tacy.

Her drawing board overlooks the garden of the Edwardian house she lived in for 56 years, now shared only with Katinka, cat number nine. Like Kerr's creation the forgetful Mog, she is white with a tabby tail – but, at 13, getting thin and spiny.

‘In Barnes,’ Kerr said, ‘dogs are the thing. Everyone has to have one. And they all walk on Barnes Common every day – but the dog-owners aren’t on their phones, unlike the ones with children.’

Walking was ‘a good antidepressant’ after her husband died in 2006, and ‘a good way of thinking about work. It seemed to absorb something that would otherwise get in the way.’ We walked together over Barnes Common to my bus stop, observing mummies on mobiles...

There were no dull moments with Kerr. Mention her son Matthew’s London day school, Latymer (she hated boarding herself, and would never inflict it on her children), and she told me he was in Hugh Grant’s year at school and Oxford.

Two schools, in London and Berlin, have been founded in Kerr’s name, and in 2008 she received the OBE for services to children’s literature. She donated her Tiger illustrations to Seven Stories, the children’s book archive on Tyneside. I was there on the day of the drawings’ arrival, which caused paroxysms of excitement.

The OBE citation also mentioned ‘Holocaust education’ – based on her wonderful memoir, When Hitler Stole Pink Rabbit, about her family’s flight from Berlin, just in time, in 1933. She wondered how to tell it.

‘In most books where children fall on hard times, they are OK because their parents can cope; the mother can cook and make beautiful clothes; the father can make furniture. Mine weren’t like that.’

It’s a thrilling story, telling what it’s like to live under an oppressive regime, and to be a refugee. It’s compulsory reading here and in Germany – and she feels sorry for German children having to write essays about it.

‘How can you be expected to feel guilt about something that happened before your parents were born?’

When I mention the rearing of anti-Semitism in today’s Labour Party, she muses, ‘Well, there’s so much else wrong with Corbyn...’

She has never joined Labour or any other party, declares herself ‘not at all political’ and, like her father, she is an atheist. Her chief feeling remains one of gratitude: to stress how lucky her family were, with so many other Jewish refugees, to find a warm welcome in London.

Their clever, witty father, Alfred Kerr, had been so famous in Germany as a drama critic and anti-Nazi broadcaster – ‘in the mould of Bernard Levin or A A Gill’ – that his naturalisation was sponsored by George Bernard Shaw and H G Wells. Kerr discovered this from her family files in the Public Records Office.

‘You can get a copy for a modest sum. Even my own file was this thick with testimonies. They even checked my bank account – about £9. But I wish I’d known then how highly my art school tutor regarded me.’

Everyone’s conclusion was that Kerr would be ‘an asset’ – as indeed she has been.

Anna, her alter ego in Pink Rabbit, predicted that she could never be famous, because her father was. Kerr only wishes she could tell her father that she too has found fame as a writer; a hereditary link in some families. Her son Matthew followed her husband in winning the Somerset Maugham Award for fiction, ‘just like my husband’s friend Kingsley Amis and his son Martin’.

Matthew Kneale, a superb novelist and historian, lives in Rome, which Kerr loves to visit, and she took her teenage grandchildren to lunch ‘one at a time’; good grandparental practice.

Because her father mocked the Nazis, his books were burned. In exile, he often despaired of getting work. ‘Before he died, in 1948, he wrote that his life might have been easier if Hitler hadn’t happened. “But then,” he said, “I would never have seen my son win the Prix d’Excellence [a French school prize], nor would I hear my daughter say, ‘Isn’t it lovely, being a refugee?’ ” ’

He had a talent for happiness, Kerr reflected. Which she inherited, too.