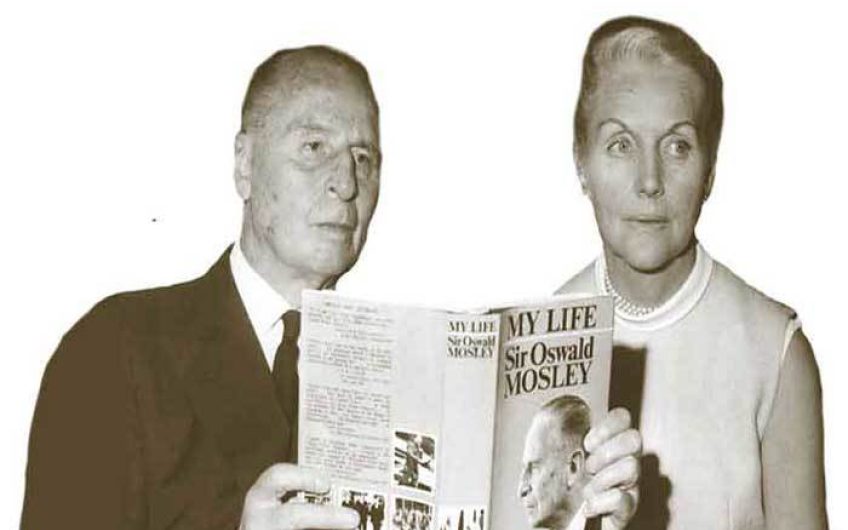 It was in the spring of 1968 that I – a young reporter on the London Evening Standard Diary – was sent to Orsay to ‘go and interview that old traitor Mosley’.

Sir Oswald had just published his autobiography, My Life.

The Mosleys were standing in the doorway of their beautiful home – Le Temple de la Gloire, built for the 19th-century military hero Jean Victor Moreau.

They were an impressive-looking couple. Sir Oswald was a six-footer with a military bearing (he was decorated in the First World War) and Diana Mosley still had the fine bone structure that made her the most beautiful of the Mitford sisters.

We sat in their smaller sitting room; Sir Oswald oozed a certain sinister charm. He reminisced about the days he led marches of his Blackshirts (as his British Fascists were called) through the East End of London, then a Jewish area.

‘Those marches were perfectly legitimate, but we were subjected to abuse by thugs who wanted to disrupt our rights,’ he said. ‘It also happened during our mass meetings. Such demonstrations against us were undemocratic by those people who tried to break up those meetings.’

I told him that it was during one of those marches that my late mother had caught him, face on, with an egg. His eyes grew cold. ‘Do give your mother my kind regards,’ he said sarcastically.

What of his notorious anti-Semitism?

A slight irritation entered his manner and his mood darkened. ‘I am NOT an anti-Semite,’ he said. ‘But I was against those Jews who tried to provoke another war because of what they perceived Hitler was doing to their co-religionists.

‘But anyone like me, who had been through one war and seen its horrors, would most certainly not want another.’

I asked if he had any Jewish friends. ‘Of course I have, dear boy,’ he replied. And he reeled off the names of several Jewish merchant bankers. ‘I have great admiration for those Jews with great scientific knowledge… I am particularly fond of Lord Rothschild.’

Mosley, then 71, still had hopes of leading a British government and said, with some fervour, that he still felt ‘My whole life has been in training to lead.’

Wasn’t Hitler a guest? ‘Yes – he was very quiet, but there was something extraordinarily powerful about him,’ said Mosley. ‘It was a very happy occasion.’ It was when, during the interview, I mentioned I was Jewish that the mood changed. Mosley just smiled and said, ‘Ah yes, but there are Jews – and Jews!’

Diana Mosley let out a small cry as she broke a fingernail, and left the room.

Mosley had the grace to look embarrassed. Perhaps the idea of a Jew in her home was too much.

Some time later, she wrote to her sister Nancy, ‘The Evening Standard sent a nice, well-educated young man to interview Tom’ – as Mosley was known – ‘but he turned out to be Jewish. They are a very clever race and come in all shapes and sizes.’

I savoured the unintentional compliment.