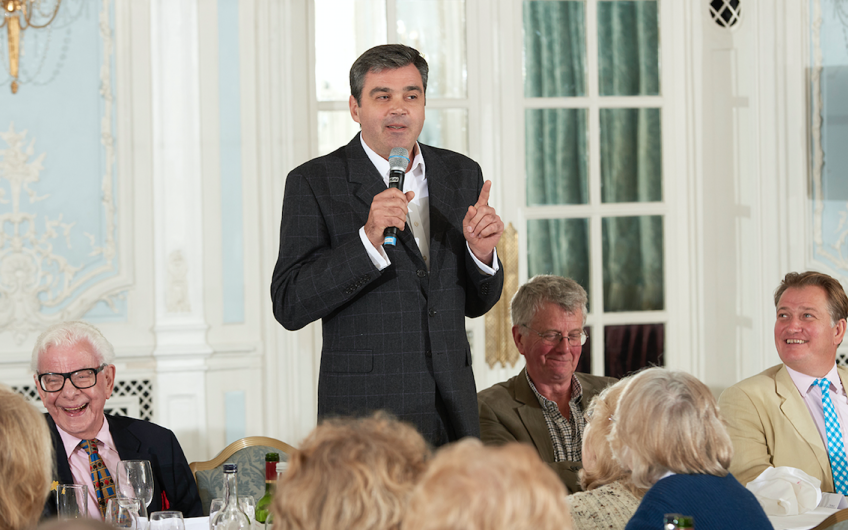 With Simpson’s-in-the-Strand still out of action, we were, once again, welcomed to the Savoy’s stunning Lancaster Ballroom for our Literary Lunch, with drinks in the Parlour Room before.

Our editor, Harry Mount, opened proceedings with a bit of strategic marketing for The Very Best of The Oldie: 1992-2017: the 25th anniversary edition of the Oldie, starring its best articles from down the years. He referred to its last pages, that pay tribute to the two great men who helped make The Oldie so special: Jeremy Lewis, the former deputy editor, and Alexander Chancellor, the former editor, who both died earlier this year. It was a delight to have Alexander’s sister, Susanna Johnston, at the lunch.

Following this, Barry Cryer, brilliant as ever, took the stand, parrot gag in tow, to introduce the speakers.

Tom Fort was the first to speak. He began by voicing an opinion we all hold: ‘The Parrot Joke does not stale with repetition.’ His speech outlined English villages and village life: beginning with a brief chronology, followed by an assessment of the toll that modern life takes on the most beautiful of them and the surprising rage of a a poorly informed correspondent, who accused him of falling asleep in the middle of a parish meeting. Fort described to us his fantasy: being Conservation Tsar, which would permit him to save villages from the conservation status that he so fervently criticises for suffocating village life.

Following Fort was Mark Mason, who delighted us with tales of his countrywide search for the perfect pub-quiz question. He delighted the audience with the question, ‘Prince Philip and the Queen. One takes a shower, the other a bath. Who prefers what?’ (Answers at the end of this article). At the core of his talk was the inherent inquisitiveness of the human condition, demonstrable even before birth in foetuses, which will grab at needles intruding into the womb in prenatal tests.

Last, but certainly not least, were the Oldie’s resident celebs, the Gogglebox stars Mary Killen and Giles Wood. Their talk outlined their book - The Diary of Two Nobodies - a look at the story of their sometimes reluctant experience with what they called ‘late onset fame’ and how they have adapted to it. Examining their Gogglebox experience in detail, they spoke of the way the programme had brought them closer together, prompted the writing of an ‘unputdownable’ diary and the secret to appearing on television: not looking at Twitter afterwards. You can read a hilarious interview with them in the current issue of the Oldie.

We are very much looking forward to returning to newly refurbished Simpson’s-in-the-Strand for our next literary lunch – and are very grateful to the Savoy for their continuous and wonderful hospitality.