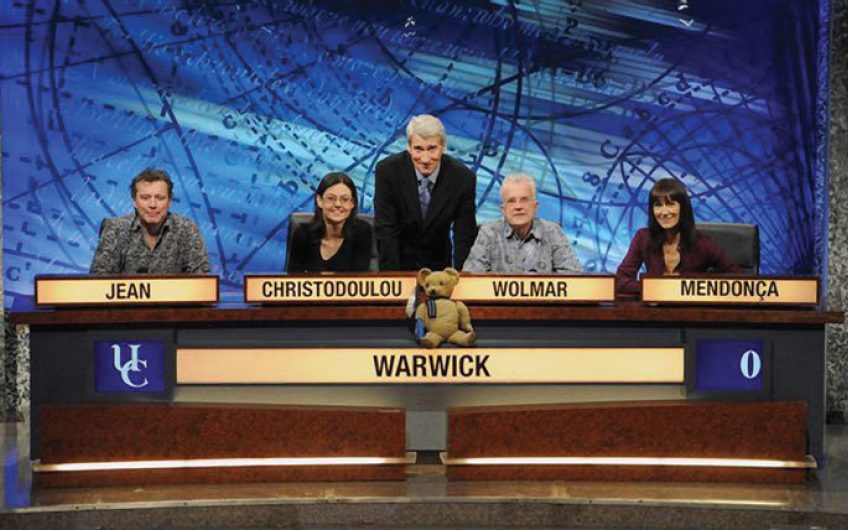 Sometimes, even in relative old age, you get a second chance. I was nowhere near clever enough to go on University Challenge when I was at Warwick in the 1960s, so when the email came asking me whether I wanted to appear in a special edition of the programme, I hit the return button with the alacrity of a student accepting an invitation to the freshers’ ball. They were clearly scraping the D-list celebrity barrel, and my good fortune came as the result of my book on Britain’s railways, Fire and Steam, falling off the question-setter’s shelf at just the right moment.

I was captain of the team, which consisted of film-maker Vadim Jean, who directed Leon the Pig Farmer, actress Carla Mendonça, and the fearsomely clever Daisy Christodoulou, who had captained the undergraduate team to victory five years previously, and now teaches English at Pimlico School.

We met in a pub beforehand, which turned out to be a killer ploy. We liked each other, promised to enjoy ourselves and worked out our various strengths. Daisy was full of good advice: blank out the previous question, focus on the starters and be quick on the buzzer.

Filmed in Manchester, there were to be five matches, with the four highest-scoring teams going through to the semi-final. We were up against Sheffield, whose team boasted the MP Graham Stringer, and, oddly, the former vice-chancellor of Warwick University, Professor Stuart Palmer – who, I noted with envy, has a train named after him. Despite regularly appearing on TV, I was nervous – particularly of being flummoxed by a railway question.

Suddenly, we were in the studio – a practice question, and then the real thing. Daisy was on fire. Whether it was planetary orbits or City finance, Daisy had the answer, getting eleven starters right. She was even good on sport. The rest of us chipped in on the bonuses and soon we were 65 to nothing up. Even when we goofed – why did I say Finland instead of Denmark? – they sat there looking shell-shocked. We won by more than 200 points and went off for a curry in exuberant mood.

The semi-final was also a breeze. Edinburgh’s low point was when asked who, alphabetically, would be the first 20th-century prime minister, former Liberal leader David Steel, answered ‘Callaghan’. Paxman smirked slightly at poor old Steel when I came in with ‘Asquith’, as if to say ‘and he was a Liberal’. Daisy was on form again and we scored 265 to their 35.

Now it had started to matter. We had barely imagined getting through the first round and here we were in the final against Trinity, Cambridge. They looked good, with a team comprising broadcaster ‘posh Ed’ Stourton, QI producer John Lloyd, a very clever maths teacher and the TV producer and writer Daisy Goodwin. We got off to a flying start. A question about the Hogarth Press which Stourton got wrong, a cricket one that our Daisy snapped up, and then, amazingly, a question which combined my two best subjects: football and the Underground. We were 50 points up, and thoughts of the trophy crossed my mind.

Too soon. We got the picture question wrong, and suddenly it was a battle of the Daisys as Goodwin came into her own. Their own clever teacher, Robin Bhattacharyya, another former winning captain, played a blinder, rattling off 25 points in one go. Daisy Christodoulou and I started pushing the button too early, always a risk. We were getting a taste of our own medicine. We got hammered.

Afterwards, Paxman was charming. We congratulated the winners but it rankled, and I still wake up thinking: ‘Why the hell did I forget Uruguay was smaller than the UK?’ Worse, Daisy Goodwin wrote a gloating piece in the Sunday Times about how she’d always loved being a clever clogs. But hey, I got my second chance by appearing on University Challenge at 62, we had a wonderful weekend and made some wonderful new friends. And when it came down to having sheer good fun and a great team spirit, Warwick definitely took first prize.