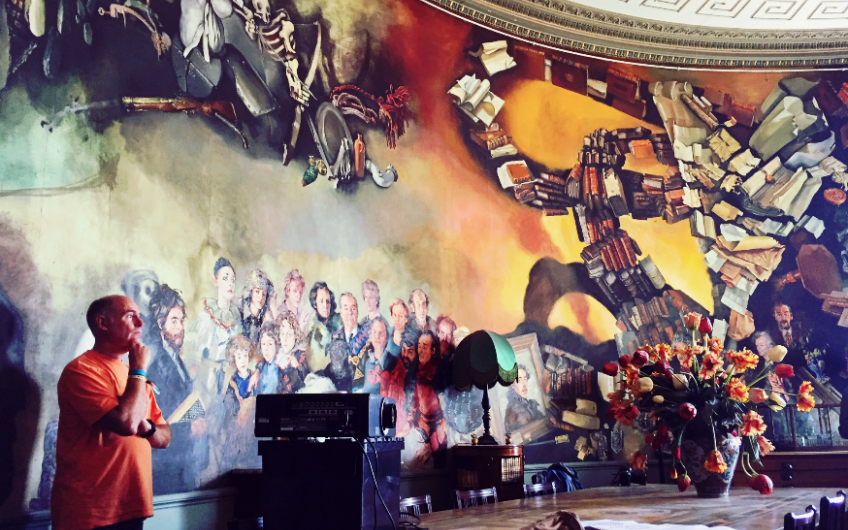 Buxton, Hay, Aldeburgh and Edinburgh are all fantastic literary festivals. I went to Buxton just the other weekend and was greatly impressed by the beauty of the place and, almost equally, the efficiency in the way the festival was run. But, it’s safe to say, they don’t get much groovier than Port Eliot.

Port Eliot runs to a different model. First of all, you don’t have to book tickets to attend talks. You’re at liberty to mill in and out of tents, between talks, cookery demonstrations and displays. You can either scheme a militant schedule of events to attend, hour-to-hour, or stumble upon things by happy accident. You simply buy a weekend ticket, and then the world – or festival ground – is your oyster.

With a map to hand, to amble around Port Eliot is one of life’s great pleasures. Port Eliot has been lived in for over a thousand years and is believed to be the oldest continually inhabited dwelling in the UK. It’s not often that you find yourself in Grade I-listed grounds, which surround a Grade I-listed house. But simply to describe the house as ‘Grade I’ is to do it a great disservice. The description overlooks the eleven staircases, fifteen back doors and eighty-two chimneys under a roof that covers half an acre. And it fails to reveal that artistic collaborators have ranged from Sir John Soane and Sir Joshua Reynolds (the founder of the Royal Academy) in the eighteenth century, to Robert Lenkiewicz in the twentieth.

Lenkiewicz’s work 'The Riddle Mural' (pictured above) depicts abstract topics as disparate as insanity, unrequited love and the apocalypse, jarring beside affection and harmony, and played out through family skeletons in a 40ft-diameter room. Academics at Plymouth University used the room to host talks on topics such as ‘The science of time’ and ‘The idiot brain’. Subjects as appealing to oldies as to youngsters. 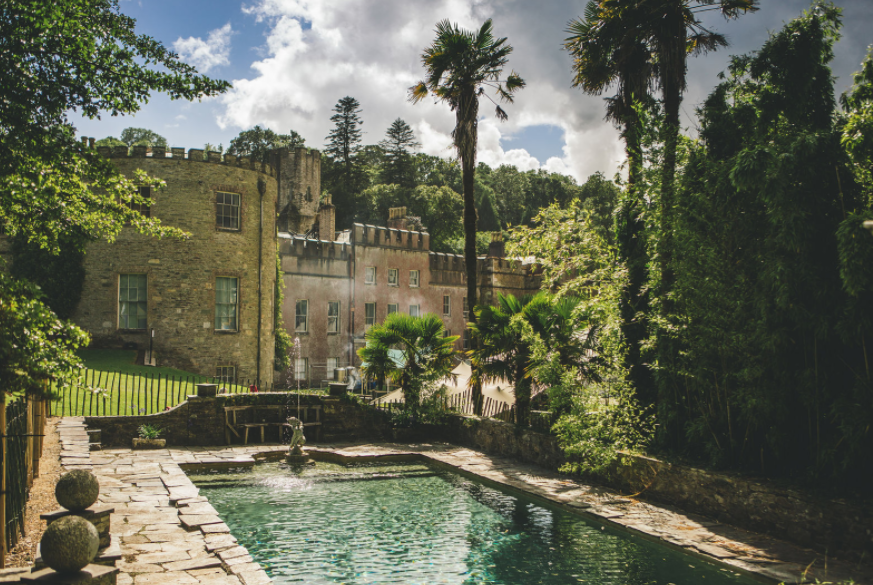 Enough about the grounds – across eleven stages, there was literature, music and art. In a walled garden, I listened to Bella Bathurst, author of Sound: Stories of Hearing Lost and Found, an Oldie book of the month, talk about losing her hearing in her late twenties, only for it to return twelve years later. It was incredibly moving to hear the serious effect the loss of hearing had on her life and how it heightened her other senses.

At the Park Stage, Radio 4’s John Lloyd interviewed Emily Maitlis, the BBC Newsnight journalist (pictured below), who reported on the 2016 US presidential election campaign in New York and Washington. They mused over Trump’s sticky hair and run-ins with other serious White House occupants, from Clinton to Bush. 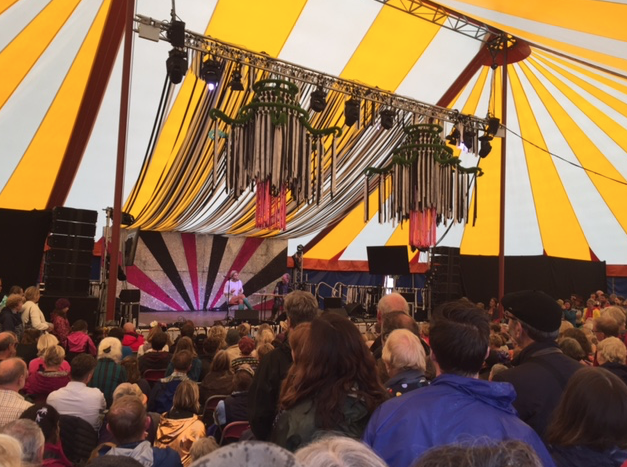 Martin Parr, the wry-eyed documentary photographer, talked about his latest exhibition, documenting behind-the-scenes life at Oxford University. He pondered the great paradox at the crux of it all: the historic traditions, from wardrobe to dinner-time rituals, at a place deemed to be at the cutting edge of thinking and practice. It will be on display at the Bodleian Library between the 8th September and 22nd of October.

Terry Newman, a fashion writer, discussed her new book, Legendary Authors and the Clothes They Wore, with the provocative thesis that the sartorial choices authors make are deeply connected to the narrative choices they make. She profiles figures from Joe Orton to James Joyce and Zadie Smith.

The Oldie’s Harry Mount spoke to a jam-packed Idler Academy tent about Brexit politics with resounding wisdom, advising, ‘If you’re thinking about writing a book on Brexit, don’t!' – owing to the number of times he has had to edit and rewrite in order to keep it topical. Marcel Theroux, brother of Louis, hosted a literary pub quiz with rounds on Jane Austen, Harry Potter and emojis, the pictorial alphabet (used as clues to book titles).

From the roof of the house, Alan Cox, an actor, read Whale Nation in fond memory of poet and polymath Heathcote Williams, who once did the same thirty years before. Williams died earlier this year. He lived at Port Eliot for twelve years and was remembered all around the festival.

The next festival takes place from 26th to 29th July, 2018. Saturday's biblical downpour was not enough to put me off. 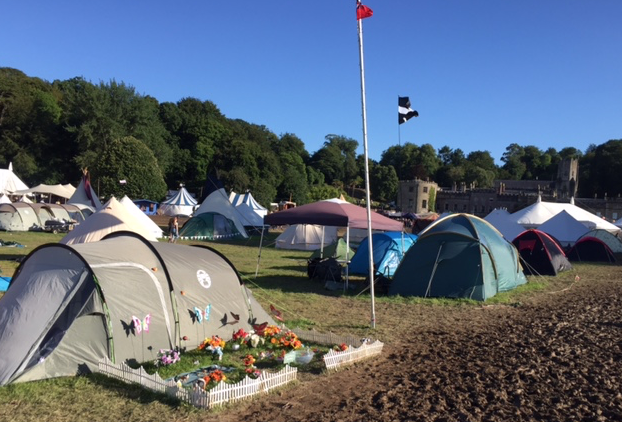 The view on Sunday: a garden erected for one-weekend-only survives unscathed 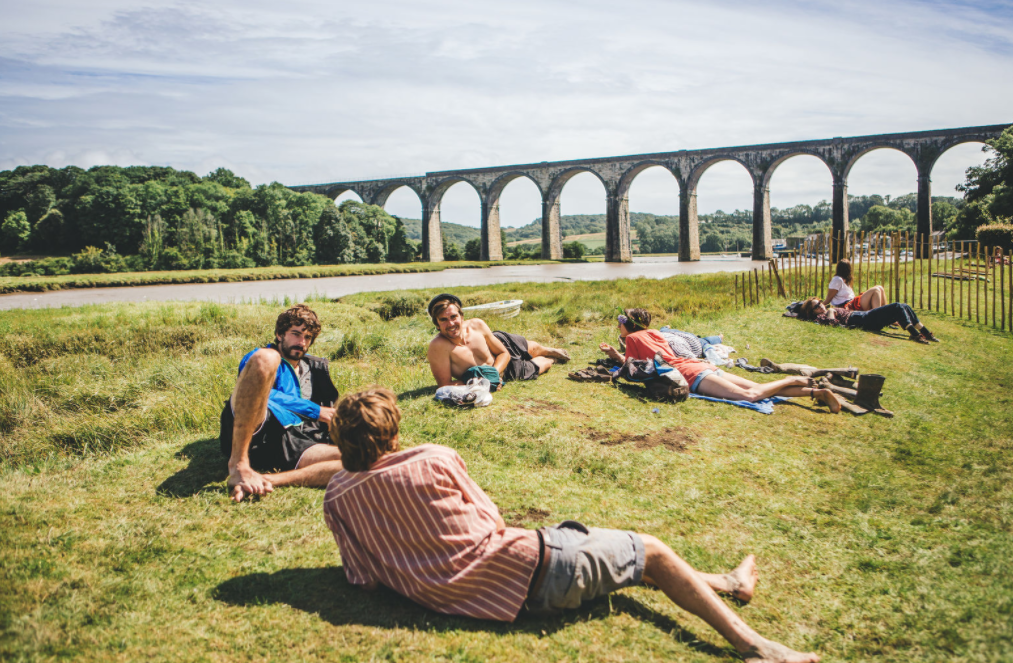