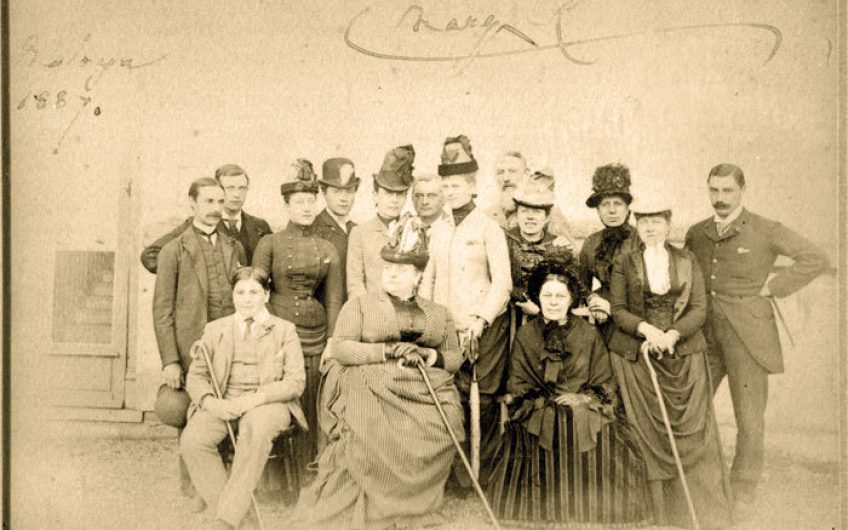 The photograph signed by Queen Mary, of Verrall Dunlop’s grandfather with the Tecks in Switzerland
View Full Size
1
of 1

In 1946 I became a ‘Woolly Girl’ girl at No 22 Bruton Street, a graceful, eighteenth-century Mayfair house where we organised exhibitions of wool cloth funded by the International Wool Secretariat representing the wool-producing Dominions – Australia , New Zealand and South Africa.

Our drawing-room floor was reached by a curving staircase tucked behind which was a very small lift . Go down and you were in the boiler room, go up and you reached the upper floors of the house. As we never used the lift, the exit to our floor was covered by a heavy wool draught excluder.

One day we heard the rumble of the lift stopping followed by the clanking of gates, and the curtain billowed forward to reveal the firmly corseted pale blue behind of a lady in a matching toque, accompanied by a surprised and rather agitated companion.

In a flash, our resourceful boss Patricia recognised Queen Mary, dropped a curtsy and welcomed her as though she had been expecting her at that very moment.

An imposing and upright figure, the Queen had spun round on her parasol to face the right way, but her lady-in waiting emerged looking rather deflated and crumpled: unfamiliar with lifts, she had already taken Her Majesty down to the basement boiler room en route to the first floor. It seemed that they had both found this an interesting experience and they pronounced themselves proud of their achievement in reaching the destination unharmed. (At that period in her life Queen Mary suffered from not having enough to do, and seeing something reported in the paper, she would gather her faithful lady-in-waiting and set off to investigate unannounced – as one could in those security-free days.)

The visit was a great success and was repeated on a regular basis. The fabrics were the main attraction for the Queen, who was renowned for her acquisitive ways. Grey wool lace was her particular favourite. Although clothes rationing was still in force, the manufacturers always managed to find a length of anything she admired. Someone at Marlborough House would tip us the wink that HM was on her way, and a quick call to Moyses Stevens in Barclay Square would produce a bouquet in a matter of minutes. One girl stood ready at the front door, another at the lift to avoid trips to the boiler room, with Patricia to welcome at the gates.

Before long she knew all our names, and we enjoyed a near informal relationship with her until the big bosses from the Dominions got wind of the royal visits and wanted to be in on the act. Next time a visit was announced the chairman, a Dr Booth of Australia, arrived hot-foot. The lift gates clanked,

Patricia dropped her curtsy and the royal presence stepped forth with her hand out to greet her hostess. This was too much for Dr Booth, who pushed in front of Patricia and announced in stentorian tones ‘I am Dr Booth, Chairman of the International Wool Secretariat.’ Queen Mary was a great stickler for correct etiquette and this rotund little man had not been presented to her. She swept past him without a word and greeted the Woolly Girl whose turn it was to hold the door open. ‘Good Morning Miss So and So, and how are you today?’ Dr Booth might have been invisible, and forever after she referred to him as Dr Boots.

We had to move from our beloved Bruton Street to very modern offices in Dorland House. But that didn’t deter Queen Mary as our showroom, though less elegant, was bigger and better and there was even more to see. It was now the late 1940s and Dior’s New Look was sweeping all before it. Never had there been a more exciting fashion moment after years of austerity and padded shoulders. The wholesale firm of Dereta fitted us all out with catwalk copies, and we fancied ourselves something rotten. One of us, Betty Frith, was particularly elegant. She had very dark hair and her New Look choice was stark unrelieved black – she looked like a fashionable crow. It was her day to hold the door and mine to greet HM inside the exhibition. The Queen acknowledged Betty, then turning to me, said in a sympathetic whisper ‘I am so sorry to see Miss Frith is in mourning’ – for a royal, the only reason to be dressed in black.

One day Queen Mary led me in to a central stand where we could not be seen and surreptitiously brought out an envelope from her pocket. ‘My child,’ she said, ‘Could you do something for me?’ ‘Of course, Ma’am,’ was my obvious reply. Out came a small cutting of beige tapestry wool. ‘Could you match this for me ?’ she asked, rather secretively. ‘I am making a carpet and I have run out of background wool.’ Paton & Baldwin’s duly obliged and delivered a great many of their distinctive pale brown flat boxes, which stood piled up least knee high. Immediately I was off to Marlborough House and put them into the hands of the lady-in-waiting. A month or so later the telephone rang and a well-modulated voice asked when the wool for the Queen’s carpet was coming. I assured the lady-in-waiting that I would look into it, but boggled at the thought of having to ask Paton & Baldwins for more – no charge had been made for the first lot. The next day an apologetic call came from the lady-in-waiting: ‘You will be pleased to hear we have FOUND the wool. It was in her LITTLE BOOT CUPBOARD.’ She explained that the housekeeper had tidied away the boxes and then departed leaving no instructions, having had a stroke.

As a young man my grandfather had attended a lunch in Switzerland with the Tecks – known in those days as ‘the poor Tecks’ – an impoverished family who eventually made good by marrying their daughter May into the British Royal Family. My grandmother gave me a photograph of the lunch and I took it down to Marlborough House late one afternoon with a request that the Queen would be kind enough to sign it. To my surprise, before lunch the next day the photo came winging back, not only signed and dated but with a list of all the others in the photo.

As a legacy of the war, no coloured china was being made when I got married, so Queen Mary, deciding on a present to give me, reckoned a pretty tea service was the right thing. Imagine the excitement when a large box arrived from Marlborough House. Inside was a very poorly painted tea service with an old English pattern of violets. The box bore an old and tatty label: ‘From His Royal Highness the Maharaja of Jaipur.’ How I wish I had kept that box. The tea service is treasured but never used.