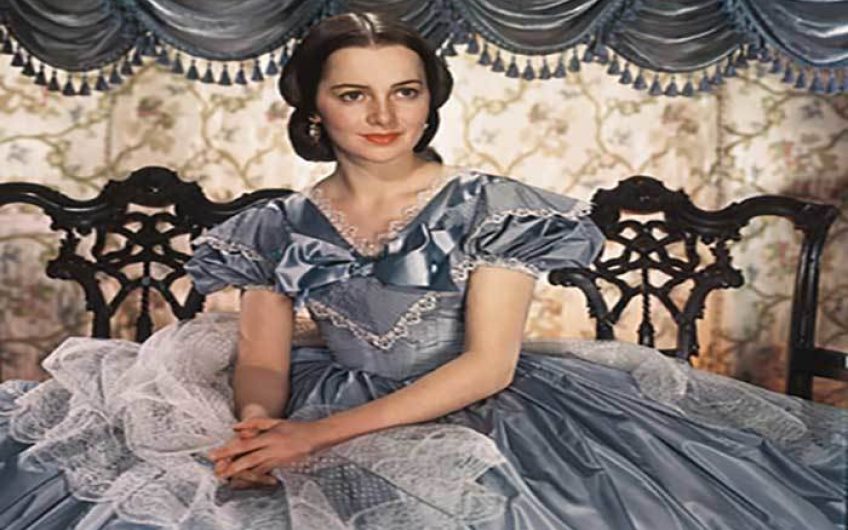 Olivia de Havilland has sadly died at the age of 104. In 2016, she was our Oldie of the Year. Roger Lewis pays tribute to the Hollywood legend

During the coronavirus crisis, the oldest living Oscar winner told the Daily Mail, ‘I hope everyone has a safe, and clean, next couple of weeks. lf I must leave this life, I would like to do so ensconced on a chaise longue, perfumed, wearing a velvet robe and pearl earrings, with a flute of champagne beside me and having just discovered the answer to the last problem in a British crossword.’

What a hero! Who else blushed so becomingly in Technicolor? On Christmas Day we watched The Adventures of Robin Hood, and my children wanted to know who this Maid Marian was, in her mauve and strawberry red costumes. She was such a babe, with a seriousness, a thoughtfulness; her eyes had the glisten of a gem, and whenever she saw Errol Flynn her face was filled with smiles – she had an erotic glow. Olivia de Havilland, the Maid Marian my children so admired, will be 104 in July, and is the oldest living Oscar winner. Through Stephen Fry, I contacted her in Paris, where she has lived for sixty years, and she agreed to answer my questions.

The Snake Pit; the mother separated from her child in To Each His Own; the smiling and seemingly demure murderess in My Cousin Rachel; the vulnerable and cruel woman in The Heiress, dooming herself to loneliness.

‘Overnight success when you are very young is extremely disorientating,’ she told me, ‘and mine occurred in September 1934, when I was just eighteen. I went on stage at the Hollywood Bowl as Hermia in Max Reinhardt’s A Midsummer Night’s Dream’ – in the film of which she is lost in the forest, her billowing, silvery grey dress torn and stained, and her big brown eyes burning with a gypsy quality.

As a Hollywood star, she found herself subjected to a ‘brutally exhausting regime’ in which she was required to work six days a week, nine hours a day. ‘After a short break for lunch, you had to report back with hair in perfect order, make-up refreshed, and costume impeccable. On Saturdays we worked late ... you were at the mercy of the studio’s publicity department. To publicise Captain Blood I was photographed brandishing a sabre and garbed in ragged black shorts, knee-length black boots, a tattered shirt and a black pirate hat adorned with the skull and cross-bones – even though Errol Flynn was Captain Blood, the pirate, and I was Arabella, his innocent sweetheart.’

She regards Flynn as a ‘greatly underrated performer’, as became apparent ‘when we filmed the “balcony scene” in Robin Hood. He scales the castle wall, enters Maid Marian’s chambers and, lingering on her balcony, asks if she will join his band of merry men. The scene was set up with stand-ins, and favouring Maid Marian. However Errol was so moving when he spoke his lines it was decided to change the lighting and camera positioning to favour him. I find his performance as moving today as I found it then.’

‘Studio heads could be cantankerous and unreasonable,’ she continued. ‘Jack Warner had such a reputation. He didn’t like to lend me to another studio, especially if it were for an important film in which I was cast in a favourable role. He claimed that when I returned to Warner’s I would be uppity. When he grudgingly loaned me to David Selznick to play Melanie in Gone With the Wind, I promised him that I would not become uppity.

‘When I returned to Warner Brothers I meekly played a supporting role in The Private Lives of Elizabeth and Essex with Bette Davis and Errol Flynn, but when Jack refused me permission to attend the premiere of Gone With the Wind in Atlanta I finally became uppity and went.’

Irving Thalberg at Metro-Goldwyn-Mayer, on the other hand, ‘was a wonderfully intelligent, talented man, with whom everyone wanted to work – Clark Gable, Spencer Tracy, Norma Shearer, Greer Garson, Lionel Barrymore. I worked with one of MGM’s directors, George Cukor, during the first days of shooting of Gone With the Wind. When he was replaced by Victor Fleming, Vivien and I secretly met with George on our days off to go over our scenes with him.’

In those days the standard studio contract was for seven years ‘but it could be suspended and extended if an actor refused to play a particular part. I took several suspensions without pay, and when my original agreement came to an end in May 1943, my extension time was prolonged indefinitely. The situation had become unendurable. A lawyer made it perfectly clear that Warner had no right to enforce my contract beyond its original seven-year period. Warner served an injunction on every studio in Hollywood preventing them from employing me while the case was before the courts. I won favourable decisions in the Supreme Court of the state of California, and was free of my seven-year contract – as was every other actor and actress in Hollywood. I was free to work at any studio that offered me a suitable role – and none of my Academy Award nominations was for work done at Warner Brothers.’

Olivia played intelligent and sensitive women who wouldn’t be pushed around – or misbehave or expose themselves to embarrassment. She is ladylike without prissiness, brittleness or attitudinising, but her dignity and refinement could be a mask for evil – as in Hush... Hush, Sweet Charlotte, where she drives ivory-faced devil doll Bette Davis over the edge, or The Dark Mirror, where she plays identical twins, one nice and kind, the other manipulative and dangerous.

She was often required to lose her composure and scream with fear. Lady in a Cage, one of her last films, could have been made by Buñuel. She is stuck in an lift during a power cut, and drunks and hoodlums desecrate her home. In the opening scenes she is immaculate. By the end she is crawling on the pavement – a cruel spectacle of degradation. Yet she is never broken. You always feel the intensity of emotion – an animal vitality beneath the manners and courtesy.