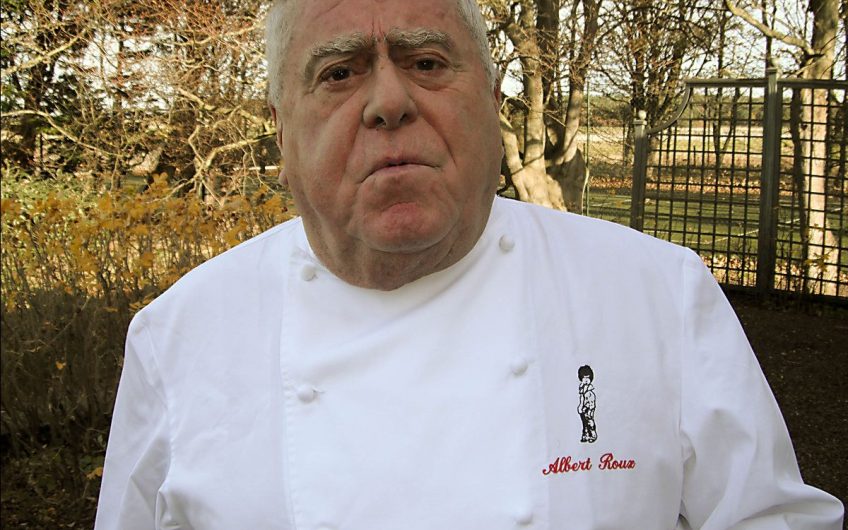 Albert Roux, the chef and restaurateur extraordinaire, has sadly died. Fellow chef Rowley Leigh remembers learning his trade under the watchful eyes of Roux and his brothers

In 1977, I replied to an advertisement in the Evening Standard. Roux Restaurants were looking for cooks for their restaurant in the city. I knew about the Roux brothers. Their flagship was Le Gavroche, at that time pre-eminently the best restaurant in London. To my surprise, my application met with success and I started at Le Poulbot (in Cheapside and now long gone) as a commis chef.

Despite my shaky credentials, I was just about getting away with it until Albert Roux himself came to help out when they were short of staff. The lack of uniformity in my turned potatoes, not to mention dropping three platefuls of blanquette de veau down the lift shaft, were enough to merit instant dismissal. I appealed. I demanded an interview with Albert. He was unmoved until I said I would work for practically nothing. With a gleam in his eye he told me to start at Le Gavroche the next day.

On arrival, I descended a narrow staircase and walked through the tiny kitchen into the dry store cupboard, assuming there was a bigger kitchen beyond. That raised a laugh.

A man some eight years younger than me was deputed to take me in hand: he addressed me as ‘boy’ and showed me the ropes with a solicitous brutality. I was put on the ‘veg’ – the lowliest rung on the ladder – and learnt how to blanch French beans, turn carrots and turnips and make a gratin dauphinois.

The work had to be, in the words of my chef de partie, ‘impeccable’. Such was the ethos that failure to achieve the highest standards did indeed seem sinful. Although the head chef occasionally grunted a word of satisfaction if one did well, any fault or delay would be met with withering scorn and threats of dismissal or worse.

‘We thrive on difficulty’ was Albert’s motto. I once asked if was permissible to blanch the broad beans before we peeled off their skins. ‘And why would you want to do that, my boy?’ was the response. I suggested it might be easier. ‘Ah, EASIER,’ he replied, and simply walked away. I got the message.

I moved to the garde manger (a cool preparation area) and was soon crafting the papillottes of smoked salmon and the saucisson de volaille Bonnefoy. This latter involved beating a chicken breast out to a paper thinness six inches square, filling it with a chicken mousse packed with pistachios and ham and with a log of foie gras rolled in truffle at the centre. This construction was tied in muslin and poached in a rich chicken stock. This was then clarified into a shiningly clear jelly which was served alongside slices of the sausage and some brioche toast.

I was proud of my mastery of this difficult technical exercise. One day I was refused the stock – the preserve of the chef saucier – and decided to bluff the jelly with a mixture of port, gelatine and gravy browning. A customer alerted Albert to its lack of flavour. I was called out and the searing bollocking left me in no doubt that I had only a tenuous grasp not just on my position but on any career in cooking. When, many years later, players commented on Alex Ferguson’s ‘hairdryer treatment’, I knew whereof they spoke.

You didn’t learn by being taught. This was not a school: you were supposed to know. Most of the cooks were French: they had been trained in a tradition of haute cuisine which meant that they spoke a common language. Expressions such as ‘brunoise’ and ‘mirepoix’, ‘meunière’ and ‘bonne femme’ that I had grasped with only a vague understanding were both precise and elementary to those who had been properly apprenticed in the craft. Most of them had started cooking professionally at the age of 16 or even earlier: my head chef, with at least ten years of experience at the highest level, was still younger than I was.

Despite my clumsy ignorance, I was tolerated. It was clear that I was desperate to learn and I did manage to demonstrate a degree of flair. I lived for little else. When I wasn’t working or sleeping, I devoured cookery books, attempting to repair the deficiencies in my knowledge.

But mostly I learnt by watching. I watched the American sous chef who was able to gauge the doneness of a piece of meat by sight and by the pressure on his tongs as he lifted it out of the pan. I watched the Japanese fish chef as he filleted brill and sea bass and rebuilt his lobsters with a plentiful lining of garlic butter. L’Homard à l’Escargot was 84 shillings (the brothers always had a whimsical way with prices). My starting pay at Le Gavroche was £8.50 per week. Even in 1977 that was a pittance but I would probably have worked for nothing – as many stagières do, albeit for very short periods – as the education was priceless.

Four years later, I returned to Le Poulbot, this time as head chef, and I was on my way.