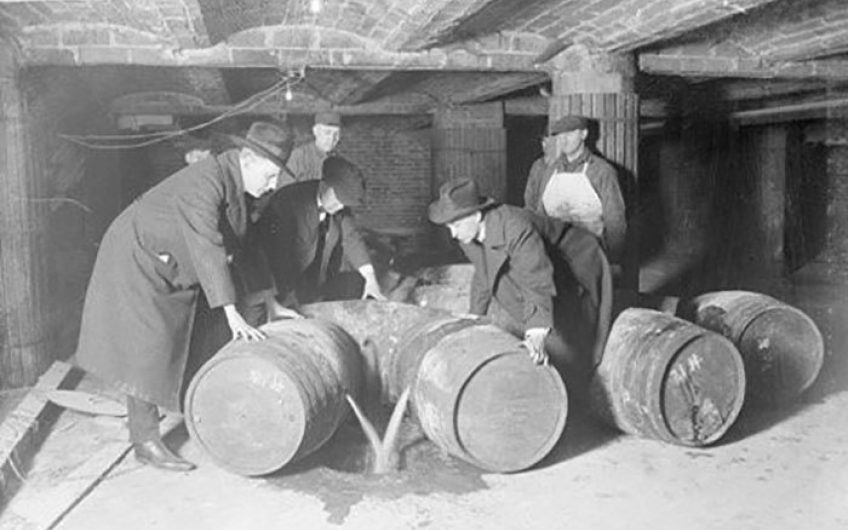 A century after Prohibition, America is still puritanical about booze, says Dominic Green

Americans are incapable of moderation. Their twin enthusiasms for spiritual hygiene and physical indulgence tip their moral fashions from one extreme to the other. Currently they’re heading to the puritan end of the scale.

New York, not so long ago a byword for entertainments that would have given Caligula pause, is now a citadel of righteousness. Smoking, trans fats and gargantuan soda cups are all banned.

The Pastrami Queen on 78th and Lexington – conveniently close to the emergency room at Lenox Hill Hospital should your dyspepsia need defibrillation – still supplies the trifecta of tender brisket, brutal mustard and

Premiership soccer on the telly. But my pickle-crunching pilgrimages to the Pastrami Queen increasingly resemble those of the believer who walked to Our Lady of Walsingham only to find that the health and safety authorities of the Reformation had opened a green-juice emporium next door.

Those who fail to remember their history are perfectly happy to repeat it. It’s 101 years since the dumbest law in American history, Prohibition, introduced on 17th January 1920. And, once again, these are dark days for the topers of America.

Americans were always big on spirits – all that rye may explain the zigzag movements of the armies in the Civil War – and Prohibition generated a splendid abreaction, the modern cocktail. But the Martini before lunch has gone the way of the typing pool and the cigarette. No one drinks at lunchtime any more. No one drinks much in the evenings either.

As usual, the moralising middle are spoiling the party with their never-ending drive for efficiency; they’re the secular face of purity. The most the upwardly mobile in spirit permit themselves is a single ‘pour’ of wine; a ‘pour’, in my extensive researches, being roughly equivalent to half a glass. In a further case of the American search for extremes, this reduction in quantity is exaggerated by the inflation of the American wineglass to a massive goblet which could accommodate a half-bottle. So your pour sits at the bottom like a puddle, and you sit at the bar feeling as if you’re breaking the law.

Even I’ve lost my taste for drink. Like the flu, this happens every year in the autumn. I spend my writing life alone, like a monk with Wi-Fi. I spend much of my free time among writers and musicians – the types Anthony Powell accurately called ‘professional topers, itinerant bores, near-criminals’. I’m not a high-volume boozer but I do believe that, if you’re going to do something, you should work hard and aspire to the ideal that the more thoughtful Greeks, themselves no strangers to the wineskin, called arete, excellence.

Like an athlete, I’m in constant training, albeit with the regime of the jogger who starts slow, hits a sporadic rhythm in the middle and finishes a sweating mess.

A rest may be as good as a change, but Fall is not the same as autumn. The Americans have taken my new demeanour – bright-eyed, a few pounds lighter and belligerently cheerful in the mornings – as proof that I’ve been through a Fall-of-Man crisis and been born again, possibly through a 12-step programme. They think that I’ve reaffirmed my belief in a power higher than Netflix and that, if I’ve joined the right group, I might also have opened up some useful networking opportunities among other penitents.

Meanwhile, the British thought I was dying when I told them I’d given up drinking. I discovered this rumour of imminent decease when I made a short trip to London in October. Reports that not only was I not drinking but also I’d gone all the way to Stroud to see a doctor caused more than one colleague to ask when I expected to die – and would I recommend them for one or other freelance job on my way down?

No one believed my story that the doctor had recently moved to Stroud, and that I’d followed him not in search of a crank cure for whatever was killing me – Stroud, as everyone knows, is to New Age weirdness as Lord’s is to cricket – but with the nobly American motive of wanting to live for ever.

The doctor took several test tubes of my blood and a couple of swabs. These are currently under analysis in a Swiss laboratory. The Swiss mercenaries will advise which foods accord best with my genetic inheritance and the cumulative damage of what Americans call ‘lifestyle choices’ and the British call ‘bad habits’.

These results will almost certainly include orders to reduce my alcohol intake immediately. The night before the samples were taken, I’d been to a magazine launch party at which I’d not so much fallen off the wagon as jumped headfirst and landed on my face.

I do remind Americans that a free people should tolerate this sort of thing, but they don’t believe me. Their history of puritanism suggests that they’re not as comfortable with the whole freedom business as they make out.

Somebody should stage an intervention before they lose their sense of humour, too.

Dominic Green is Life & Arts editor of The Spectator (US)