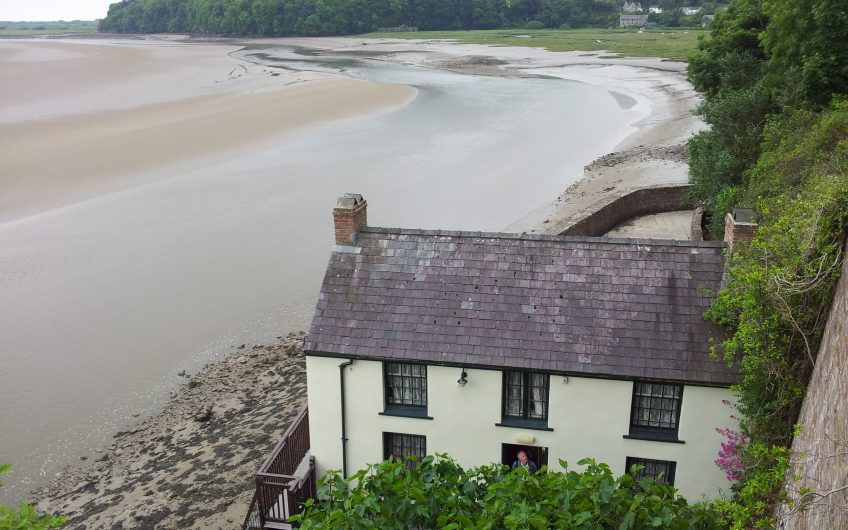 For the last ten years, an eccentric arts festival has taken place in the West Wales township of Laugharne, once home to Dylan Thomas (pictured, his old house, the Boathouse) and a gaggle of pre-war bohemian refugees from London.

It feels like little has changed since Dylan and Caitlin were squabbling in the Boathouse by the estuary and then making up in the boozy bar of Browns Hotel. Elegantly tipsy festival-goers at the Laugharne Weekend stand about on sunny pavements listening to poets and drinking beer while the residents tolerate them with a weary but amused accommodation.

Each year, the festival also announces the winner of Britain's only music book prize, the Penderyn Prize, and today this year's winner was announced: Shirley Collins, for her account of a life in English folk music, All In The Downs.

Collins is perhaps the most authentic folk singer the English have produced, beginning her career as an ambitious 20-year-old in London, up from the sticks in Sussex, having to dodge the drunken advances of the largely male folk fraternity of the early 1960s (‘charming when sober, horrendous when drunk’).

For the next twenty or so years, she recorded a series of albums which celebrated the purity of the English song. ‘I had to defend English folk music because so many people didn't understand it.’

Then, in the late 70s, a painful divorce literally took her voice away.

She was heartbroken and humiliated, and her voice began to crack and finally abandoned her. It was not to return for 35 years.

All In The Downs tells the triumphant story of her return to singing in 2014 after years of surviving - working as a cleaner and as a job centre clerk just to keep her two children fed and clothed. Now, with an MBE behind her (‘The Penderyn Prize means much more to me - they don't even give you a cup of tea at the Palace’) and a successful new album Lodestar released in 2016, she is finally recognised, not as the great Unsung Hero of the English folk movement, but one whose song is now being sung loud and clear.

At 82, Collins is still filled with the desire to, as she says, ‘sing to people, not at them’, much as her grandfather sang the songs of the Sussex landscape to her and her sister Dolly in the indoor Morrison shelter during the air raids in Hastings during World War Two. Her prize-winning book is an eloquent account of a vanishing world but one which, in her wonderfully capable hands, might prove oddly resilient in years to come.