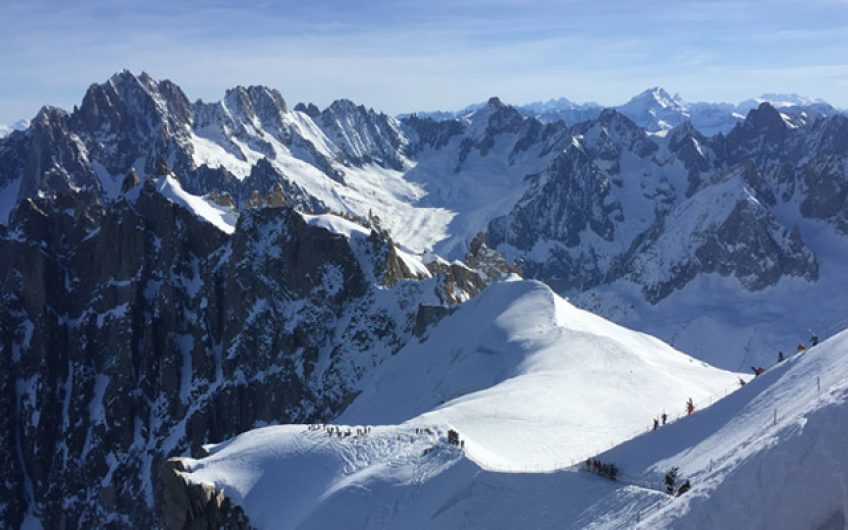 I have just returned from a joyful week’s skiing in Chamonix, by the impressive peaks of the Aiguilles Rouges. They're part of the Haute-Savoie region of France bordering Switzerland and Italy. Chamonix - known as ‘the gateway to the European Cascades’ - is the ideal jumping-off point for the ascent of Mont Blanc, the highest mountain in the Alps (a view from the top, pictured).

At the French summit of the Vallée Blanche, where I was skiing, you can look down to the Italian resort of Courmayeur and, across the mountain spires, to Verbier in Switzerland. Europe is your oyster: there are no passport procedures, no red-tape, no long, snaking queues; just a liberated feeling of cross-border fluidity.

You feel like you’re in lots of different places at once. I can only compare it to standing between the counties of Cumbria, Lancashire and Westmoreland (alas, no longer). This is not a famous spot; it’s just at the top of a hill behind my friend’s mum’s cousin’s house, Whelprigg, in Kirby Lonsdale.

The 'ownership’ of Mont Blanc, the second largest mountain in Europe, is contested. The north side belongs to Chamonix. And the south side? That depends on who you’re asking. The French consider it theirs, with the border running along the rocky Tournette mountain close by; while the Italians believe the border passes perfectly through the top dividing the mountain in half, allowing them to claim the south side for themselves.

With the row over Gibraltar, the British Overseas Territory, and continuing debate over immigration and border security, the top of the Alps felt wonderfully free, and thrilling.

Way down below, under Mont Blanc, there sits a grand triumph of engineering: a seven-mile highway tunnel connecting Chamonix to Courmayeur. Back on the ground, life is more restricted than up in the clouds. There's computerised detection equipment, infrared devices (to locate extra bodies loaded into vehicles) and stringent payment checks. Farewell to the free feeling of schussing between borders.