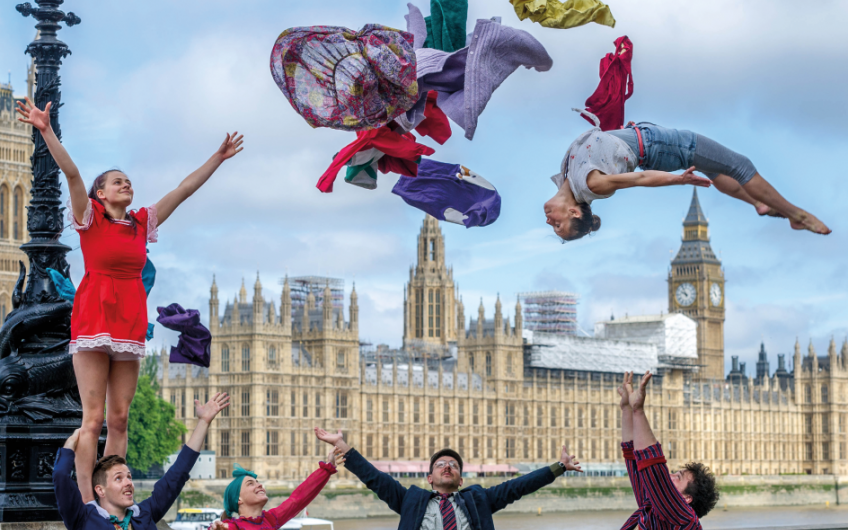 Nell Gifford, founder of Giffords Circus, has sadly died, aged only 46. Dea Birkett praises an art form that's forever reinventing itself, over 250 years after it began

It’s a late evening at Nassau Coliseum in Uniondale, New York, and there are more than 200 people standing on the stadium floor. There are acrobats, jugglers, clowns and ringmaster Johnathan Lee Iverson, standing tall among them – all six foot four of him, plus his red and gold top hat.

He’s stood with these people for almost twenty years and for more than 10,000 performances. He was just 22 when, in 1999, he first wore the Ringling ringmaster’s scarlet jacket. But this was the final show, held earlier this year.

After 146 years on the road, the Ringling Bros and Barnum & Bailey Circus was shutting down. The 15,000-strong crowd – who’d come to witness the closure of an American icon older than Coca-Cola – roared and wept. Outside the stadium, the press, the protesters and the sceptics had already pronounced circus dead. Some of them whooped with joy.

Still, Iverson’s words have proved true. Ringling may have closed, but the circus certainly hasn’t.

Circus began not in a stadium in a New York dormitory town, but on an abandoned piece of marshy land in London’s Waterloo. In early 1768, showman, entrepreneur and equestrian Philip Astley, who had honed his riding skills in the Seven Years’ War and longed for a way to display his prowess, drew out a circle to ride his stallion around while standing on its back. He discovered a 42ft diameter worked best, due to centrifugal forces.

He assembled astounding physical acts – Egyptian acrobats, clowns, tumblers and, later, his wife, who rode around the ring surrounded by a swarm of bees. This spectacle was the world’s very first circus. Every circus, anywhere in the world, began at this moment in 1768, 250 years ago.

So why has the Ringling Bros and Barnum & Bailey Circus closed – not least on the eve of the release of the film The Greatest Showman, with Hugh Jackman as P T Barnum, the 19th-century American circus supremo?

It’s easy to blame the animal rights lobby. Six months before it closed, Ringling succumbed to continual lawsuit threats and removed all eleven elephants from its show. Audiences plummeted. While protesters saw working with these magnificent beasts as animal cruelty, the paying punters clearly didn’t.

There are other reasons. Ringling was bought in 1967 by Feld Entertainment, which also runs Disney on Ice. The circus had already moved from one ring to three rings when, in 2005, Feld took it to no ring at all, playing instead in vast arenas.

When Iverson announced, three times a day, ‘Ladies and gentleman, children of all ages – welcome to the greatest show on earth,’ he did so to up to 20,000 spectators. The shows were transported on a mile-long train, known as the city without a zip code, averaging over 16,000 miles and 500 shows per year. The drain on Feld Entertainment’s budget, when Disney on Ice was much cheaper, must have been fantastic.

There’s technology, too. Young people, it’s said, want to stare at iPhones, not at a contortionist. Ringling tried to keep up with changing tastes. Its latest show was based on the Disney film Frozen, and LED lights were strung around Iverson’s top hat. However starry, the arena remained a poor relation to the high tech people found in their sitting room.

Live entertainment doesn’t have the draw it once did. But, over the past decade, there’s been a return to the real. Strictly attracts people of all ages; museum visitor numbers have surged.

So why didn’t Ringling flourish? Perhaps because it wasn’t real enough. Pedro Reis, a retired performer who runs the one-ring, tented Circus Sarasota in Florida, says, ‘They were trying to compete with technology. Don’t compete with it. Be the true circus that you are.’

The loss of the Big Top didn’t help. When I saw that last Ringling show, it took place on ice; there was no circle or sawdust. It wasn’t much like a circus at all. Ringling may have died not because it was circus, but because it wasn’t circus enough. More modest American circuses with a single ring are flourishing. All-black UniverSoul Circus has been sponsored by McDonald’s. The Big Apple Circus has just reopened with a show at New York’s Lincoln Center. Small, touring circuses, modelled on the one-ring European style, are flourishing.

In Britain, contemporary circuses, which once shunned sawdust, are rebuilding the Big Top. Britain’s most successful contemporary example, NoFit State Circus, has just constructed a 42ft-diameter ring for its show Lexicon. Traditional, tented circus Zippos has developed a show – Cirque Berserk – which plays in theatres. Circuses are inventing novel ways to present a 250-year-old art form, working in the radical spirit of Philip Astley.

The lights may have gone down on the Ringling Brothers’ greatest show on earth. But the future of circus is bright. The show goes on.

‘Who Killed the Circus?’, presented by Dea Birkett, is on the BBC World Service on 16th December. She was a circus elephant girl and is ringmaster of Circus250 – the organisation celebrating 250 years of circus