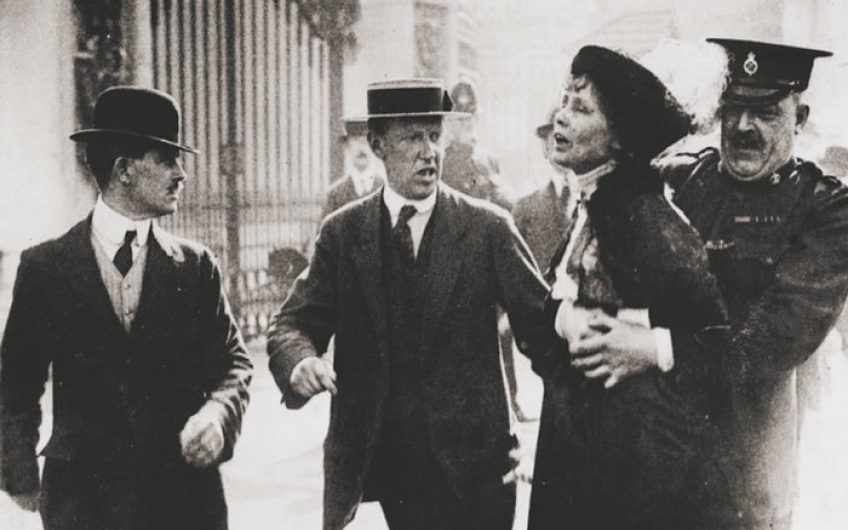 Emmeline Pankhurst died 90 years ago, aged 69. She's pictured here, being arrested outside Buckingham Palace while trying to present a petition to George V in May 1914.

A century ago, she was instrumental in British women getting the vote. February 6th marked the centenary of the Representation of the People Act, giving the vote to women over thirty. Pankhurst (1858-1928) may have been the ground-breaking feminist who fought for female suffrage – but her most bitter battles were with her own daughters.

The three Pankhurst daughters, Christabel, Sylvia and Adela, were born within five years from 1880, to Emmeline Pankhurst and her husband, Richard. He was a radical lawyer and unsuccessful parliamentary candidate, 24 years her senior.

Christabel, the oldest, was the entrancing, pretty one, thought most likely to succeed. Sylvia, two years younger, was the plain one, practical but plodding. Adela, the youngest, was the other-worldly daughter, who spoke of the neglect and humiliation of her childhood.

At their home in Manchester, they were raised in a spirit of superiority and taught advanced views about the deficiencies of society.

Richard Pankhurst was adored by Sylvia. ‘O splendid father!’ she wrote, while she referred to her mother as ‘Mrs Pankhurst’. Sylvia criticised her mother’s bourgeois attitudes, saying, ‘She was a woman of her class and period.’

Sylvia’s memoir, The Suffragette, is a searing description of sibling rivalry. Sylvia grew up dumpy, tearful and plain, always in the shadow of beautiful and cool Christabel. Christabel lived in ‘the sunny favour of the household’; Sylvia in ‘the drear wastes of misery’.

Small and sickly Adela, with weak legs and bronchitis, believed she had been denied the attention of both parents, with Christabel her mother’s favourite and Sylvia her father’s. As a child, she spent much of her time alone and rebelled against her atheist family by becoming a Christian. When she made a friend of a girl at school her parents refused to allow her to see her, because the girl’s father was a Conservative councillor.

Richard Pankhurst died aged 64 in 1898 when all three girls were teenagers. This removed his stabilising influence from the family.

They moved to a smaller house; Christabel went to university to study law, Sylvia to art college. Emmeline Pankhurst continued with political action, notably in 1903 with the foundation of the Women’s Social and Political Union (WSPU), later dubbed the ‘suffragettes’ by the Daily Mail – a name they embraced.

The suffragettes’ first ‘militant’ action was the 1905 disruption of a Liberal Party meeting at the Free Trade Hall in Manchester, where the Foreign Secretary, Sir Edward Grey, was speaking. Christabel and a companion shouted, unfurled a banner and were ejected from the meeting, whereupon Christabel struck and spat at a policeman. She had committed a technical assault for which she was charged and sent to prison for a few days: she became the first suffragette martyr.

All four women, Emmeline, Christabel, Sylvia and Adela were eventually imprisoned for the cause. The intensifying campaign was accompanied by a deepening of the toxic Pankhurst family relationships – not helped by Sylvia’s affair with Keir Hardie.

Sylvia studied at the Royal College of Art in London and came into the orbit of Hardie, the Independent Labour Party leader and one of the few MPs who supported the suffragettes.

Hardie was a kindly older man, a bearded radical like her father. He was married, and 26 years her senior, but Sylvia was to love him until his death in 1915, and later gave her son the middle name Keir.

Sylvia’s affair with Hardie disgusted her mother. The age difference and Hardie’s married status angered her, but she was also repelled by the idea of sexuality.

Under Hardie’s influence, Sylvia stayed socialist, while Christabel was more at home entertaining the fashionable ladies whose financial contributions kept the organisation afloat. When the police cracked down on the suffragettes, Christabel fled to Paris, thereafter directing policy in comfort while her mother, sisters and supporters were hunger-striking.

The suffragettes were prey to the splits that cursed all extremist organisations. Those who wanted a democratic constitution, instead of rule by the Pankhurst family, left the organisation in 1907. Moderates who thought attacks on property were counter-productive were expelled in 1912. By 1914, there was no one left in the power struggle but members of the family.

Sylvia was summoned to a family tribunal in Paris, early in 1914. She had questioned the wisdom of ‘militancy’ which now included arson of historic buildings and slashing paintings in galleries which, as an artist, she particularly abhorred.

She had also started work with women in the East End of London. Emmeline and Christabel declared they would expel Sylvia’s group. Christabel said that they did not want her promoting the ‘weakest and least educated’ women of the working class. She wanted ‘picked women, the very strongest and most intelligent’, in the forefront of the movement.

Sylvia had to go, but in retaliation she called her breakaway group the East London Federation of the Suffragettes, to the anger of her mother who felt she owned the name. Sylvia was also distanced from Christabel and Emmeline in her active sexuality. She believed in sexual freedom for women and ‘free love’.

Christabel may never have had a sexual relationship in her life. She campaigned that men should have the same constricting code of virtue as Victorian ladies. She pithily presented her preoccupations as ‘Votes for Women and Chastity for Men’ and wrote extensively on the dangers of venereal disease – which the women’s vote would supposedly eradicate.

Both her sisters were a problem to Christabel, but she explained to Sylvia, ‘I would not care if you were multiplied by a hundred, but one of Adela is too many.’

Now it was Adela’s turn to be called to the family court. She was the WSPU organiser in Sheffield but was kept away from the upper leadership of the movement. Though a gifted speaker, she had been forbidden to speak publicly by her mother and Christabel, supposedly to protect her delicate health. In fact, the ban was imposed to attract rich supporters to bankroll the movement. Her mother and sister were appalled at the left-wing slant of Adela’s work, and suspected she plotted a breakaway movement in the north. They decided to exile her. Adela was told to start a new life in Australia, and given £20 and warm clothes. She never saw her mother again. Adela set out ‘the family attitude: Cause First and human relations nowhere.’

With the outbreak of the First World War, Emmeline and Christabel ceased all political activity and backed the war effort. Sylvia and Adela remained true to pacifist principles and opposed militarism. Their mother wrote to Sylvia she was ‘ashamed to know where you and Adela stand’.

Above: Emmeline, Christabel and Sylvia

After the war, Sylvia became pregnant with a love child from her long-term partner, Silvio Corio, outraging her mother and sister’s bourgeois sentiments. To make sure everyone got the message, Sylvia announced the birth of her child in an interview in the News of the World. Emmeline insisted her daughter had become pregnant just to spite her, and ran upstairs so as not to see Sylvia when she called. ‘I shall never be able to speak in public again,’ she said. Christabel begged that Sylvia call her son after his father, to spare the family name, but Sylvia insisted on Pankhurst.

Emmeline joined the Conservatives, having previously been a member of the Liberals and the Independent Labour Party. She became a Tory parliamentary candidate in Whitechapel in Sylvia’s power base, the East End, but died in 1928 before an election.

Adela became a left-wing political activist in Australia, married a leading trade unionist and had a large family. Christabel never married, and devoted the rest of her life to Adventism, waiting for the Second Coming of Christ.

She resumed contact with Sylvia in later life – only to threaten legal action when her sister published her mis-lit memoir of the Pankhursts. Christabel was angry over criticism of Emmeline Pankhurst’s mishandling of WSPU funds, which were treated like a family coffer.

Christabel had once suggested to Sylvia that despite their differences they might meet in future ‘as sisters’, but Sylvia thought it meaningless – ‘We had no life but the movement.’

Jad Adams is author of Women and the Vote: A World History (Oxford University Press) and Pankhurst (Haus)