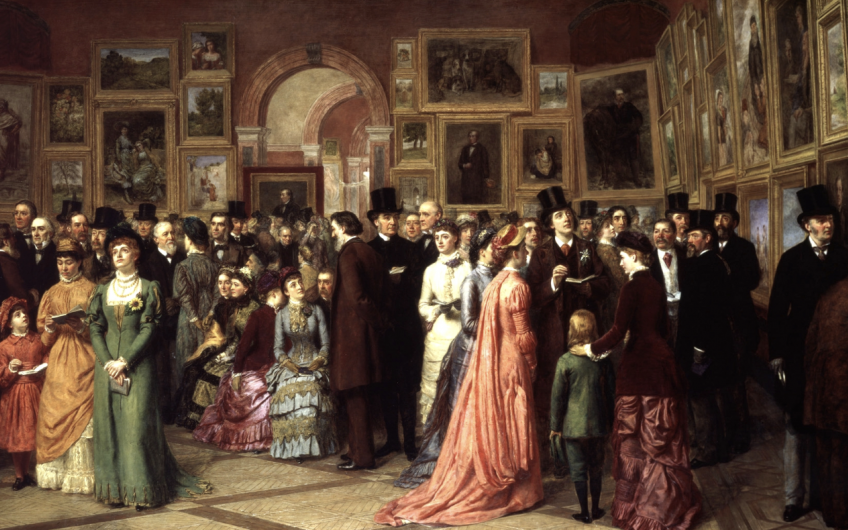 The Royal Academy of Arts was founded 250 years ago by Joshua Reynolds and a group of 35 friends, including Thomas Gainsborough and Thomas Sandby. They wished to set up a commercially viable organisation with royal patronage where they could sell their work and run an art school, funded by the proceeds of an annual exhibition, to train up the next generation.

The whole project was intended to glorify artists and to raise them from the category of tradesman to creative being – the latter being a novel and modern interpretation of their role in life. Reynolds was the first president (there is a statue of him brandishing a paintbrush and clasping a palette in the RA’s courtyard) and is the artist chiefly associated with the Academy’s inception.

There have been plenty of characters at the RA over the centuries, such as the American painter Benjamin West (1738-1820) who was the confidant of George III and twice president.

J M W Turner was made an RA at the age of 27, but Constable had a long wait (of more than a quarter of a century) to be elected. Yet both studied at the RA Schools, and Constable has (in some ways) been the more influential artist.

John Everett Millais was the youngest-ever student of the RA Schools, at the age of eleven in 1840 (he was nicknamed ‘The Child’), and the Indian sculptor Dhruva Mistry was the youngest artist since Turner to be elected an RA (aged 34, in the early 1990s). At any one time, there can be no more than eighty RAs. They are all practising professional artists who work in the UK, and there must always be at least fourteen sculptors, twelve architects and eight printmakers, though the rest are all painters.

For many years in the 20th century, the RA was seen as a bastion against modern art. In 1949, the infamous Alfred Munnings made a drunken broadcast to the nation about what he and his friend Winston Churchill would do if they met Picasso – kick his arse. Churchill took exception to this; the rabid Munnings was on his own.

Some of the more radical artists resigned: Sickert over the Academy’s failure to support the sculptor Jacob Epstein; Stanley Spencer over the rejection of his own work from the Summer Exhibition; and Augustus John over the exclusion of Wyndham Lewis’s portrait of T S Eliot. Gradually, under the presidencies of Hugh Casson and his successors, the more avant-garde artists who had long shunned the Academy were wooed into joining. Now even Gilbert & George have been elected.

Two of the founder members were women – Angelica Kauffman and Mary Moser – but then there was a gap of a century-and-a-half before the next women were elected (Annie Swynnerton and Laura Knight). In recent years, women have figured more in the Academy, and the current Keeper of the Schools is a woman (Rebecca Salter).

Can it be long before the RA has a woman president? What are the odds on Tracey Emin for the job? She already plays a prominent role in meetings and is – extraordinarily – professor of drawing at the Academy. Rumour has it that she also offered to be professor of perspective, but was not so successful in that application.

Meanwhile, under the revolutionary guidance of Norman Rosenthal as exhibitions secretary, the RA has become a leading venue for contemporary art, as well as Old Masters, though not all the Academicians have approved of what has been shown. Both John Ward and Craigie Aitchison resigned in 1997 over the controversial Sensation exhibition.

The RA’s first home was Somerset House on the Strand, built by Sir William Chambers. Later it migrated to the newly built National Gallery (1837), finally coming to rest in Burlington House on Piccadilly in 1869. In this wonderfully central position, the RA presides over a marvellous suite of galleries and a courtyard that makes a perfect display place for sculpture.

But in the urge for constant expansion, the RA has just opened what the administration is pleased to call a two-acre ‘campus’ centred on Burlington House. Finally, after years of differing plans and feasibility studies, Burlington House has been linked up with Burlington Gardens, the building to its rear, which the RA acquired in 2001.

The architect David Chipperfield won the contest to oversee this ‘transformative redevelopment’. There will apparently be seventy per cent more space, including various free displays of art and architecture, besides the flagship Gabrielle Jungels-Winkler Galleries, the new Royal Academy Collection Gallery, the Architecture Studio, the Weston Studio, the Vaults and a 250-seater, double-height lecture theatre.

The Heritage Lottery Fund has supported the scheme with £12.7m, but the RA remains an independent charity, with no government funding.

Two exhibitions in the main galleries will highlight the past/present dialogue: the 250th Summer Exhibition – the show the critics love to hate – and an historical survey called The Great Spectacle, dealing with the past 250 years of the Summer Exhibition. Both shows offer plenty of diversion for the silly season.

The sad truth is that the RA is no longer a club run by artists for artists, with a training school attached. Artists are notorious for not liking each other, for each doubting the other’s genius. To an outsider, this infighting and backstabbing can be amusing, but to the credibility of an institution set up to promote the dignity of the visual arts, internecine strife can be deleterious.

The RA is a vast organisation dedicated to moneymaking in the name of art, mounting blockbuster exhibitions that sell tickets. It is weighed down by bureaucracy, and the bureaucracy tells the artists what to do in their own home. Now nearly everyone at the Academy ignores Turner’s shrewd advice: ‘When you become members of this institution, you must fight in a phalanx – one mind – one object – the good of the arts and the Royal Academy.’