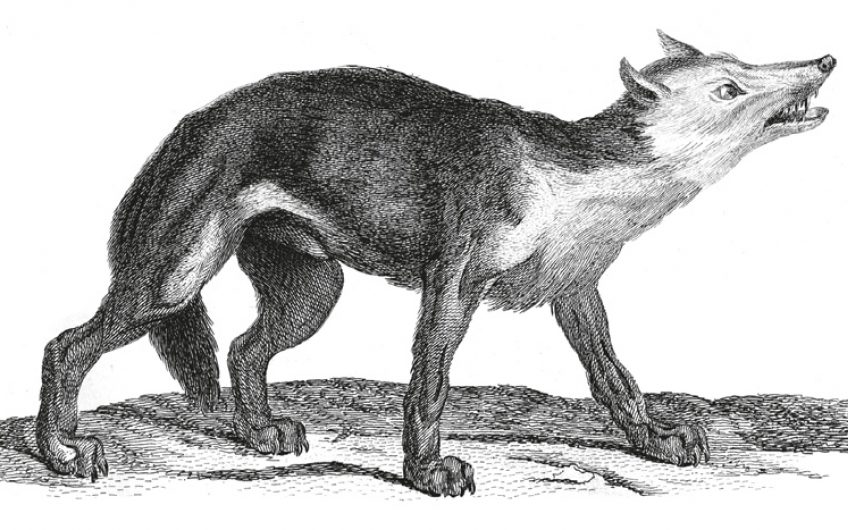 Monty Don has said wolves should be used in Britain to keep down deer. James Le Fanu examines the story of the wolf

President Macron wanted more wolves in France. In 2018, his government announced that it would let wolf numbers increase from 360 to 500 by 2023. But wolf numbers rose too quickly and he has authorised a cull limit of 20 per cent. Even so, a wolf has just been spotted in Normandy for the first time in a century.

Eighteenth-century Frenchmen would have been horrified at the idea. In his monumental Histoire Naturelle (1749), the Comte de Buffon embraced every aspect of the natural world with enthusiasm. Except for that ‘enemy of all society’, the wolf: ‘consummately disagreeable, his aspect is base and savage, his voice dreadful, his manner ferocious... odious and destructive when living and, when dead, perfectly useless’.

By the close of the 19th century, this enemy of all society – at one time, the most widely distributed of all land mammals, loping tirelessly through the dense forests of central Europe, across the grassland prairies of North America, the Arctic tundra and Arabian desert – had been persecuted with murderous zeal almost to the point of extinction.

In the US, two million were shot, trapped and poisoned. If they were caught alive, their mouths were wired up and they were left to starve, or they were set on fire or clubbed to death. But the wolf has returned, traversing mountains, rivers and motorways to recolonise parts of the Netherlands, Sweden, Denmark and Germany.

Reintroduced into Yellowstone Park just over twenty years ago, the wolf is credited with rebalancing the ecosystem in this wilderness larger than North Wales. Its reduction, through hunting, of the numbers of elk and coyotes has allowed regeneration of trees and shrubs, and an ‘explosion of species richness’. It has improved the habitat for squirrels, beavers, eagles, songbirds and even beetles.

The wolf is highly intelligent and resourceful. But the secret of its resilience lies in its highly ordered social structure. This has been sustained by mutual bonds of affection and the faculty of telepathic communication on which the collective activities of the pack depend.

The core of the wolf’s social life is the mated pair, monogamous and loyal, deferred to by their offspring. They share the responsibility for the care of the annual litter of pups. ‘The strongest impression is their friendliness towards each other,’ noted biologist Adolph Murie in The Wolves of Mount McKinley. ‘Even as adults, they play tag, prance around with sticks in their mouths, ambush one another from their hiding places.’

The sense of pleasure in each other’s company is most apparent in their jubilant choral singing. Murie writes of seeing several wolves outlined on the skyline, all frolicking together. They were then joined by others, and greeted warmly with energetic tail-wagging. ‘They then all threw back their heads in unison and their howling floated softly across the tundra.’

Each wolf has its own distinctive voice. Here, the howl fulfils the further function of assembling the pack before and after a hunt, or locating each other when separated in a storm or in unfamiliar territory. And they can also communicate soundlessly when out of visual contact. ‘Their backs may be turned to each other or they may be scattered amongst the trees,’ observes another biologist. ‘But, if one of the pack looks intensely at something, the others respond by lifting their heads and turning without hesitation to stare in the same direction.’

This mysterious faculty of extrasensory communication eludes scientific scrutiny but, it must be presumed, is essential to the wolf’s success as a collective hunter.

‘One day, I noted a line of wolves heading along a frozen shoreline on Lake Superior,’ recalls the doyen of wolf- watchers, David Melch. ‘Suddenly, they stopped and faced upwind towards a large moose some distance away. After a brief pause, they assembled closely together, touched noses and then set off in single file towards it.’

The moose is a powerful foe and, notes Melch, the pack must adapt its tactics to the terrain. First, there’s the stalk (‘restrained and holding themselves in check’) until they’re near enough to rush towards their chosen prey. This in turn initiates the chase and the opportunity for the pack to wound their victim by grabbing at its haunches with their massive jaws, allowing the fearless leader to lunge at the neck and, by crushing the windpipe, cause death by asphyxiation.

French farmers may view with trepidation the return of this most successful predator. But the insights into the collective mentality of the wolf since its reintroduction into Yellowstone Park allow us to make some amends for its murderous persecution in the past.

No longer demonised as ‘consummately disagreeable’, the wolf now seems a charismatic, almost spiritual creature – a loyal spouse and devoted parent and, among its own kind, selfless and affectionate.

The best-looking man I've ever seen