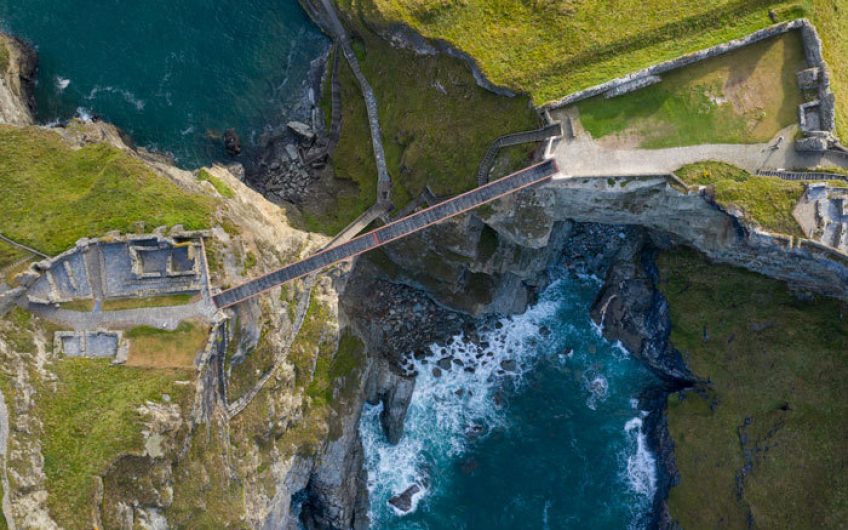 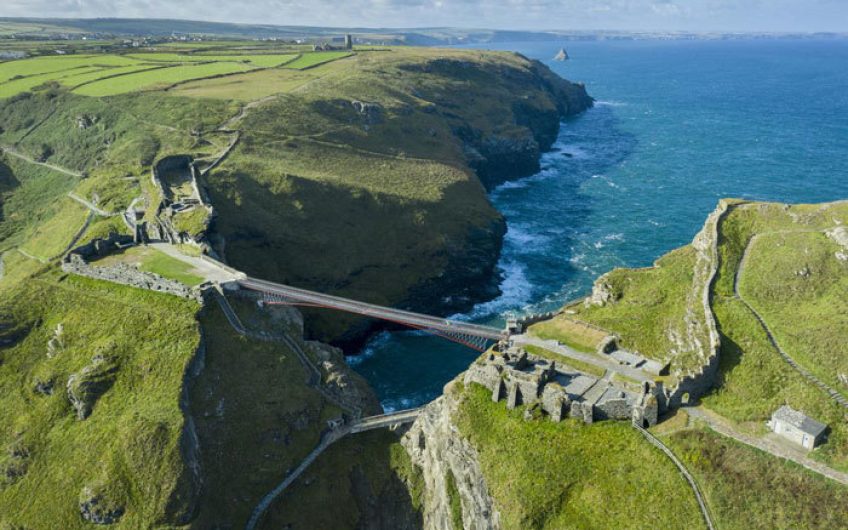 The Properties Curator from English Heritage did not want to use the phrase “Dark Ages”.

His own preferred term for the period immediately after the Roman empire withdrew from Britain was “post Brexit 410”.

So his talk about the “yummy stuff” that had been discovered at Tintagel was carefully balanced. “There are more pottery sherds from the period-that-used-to-be-known-as-the-Dark Ages from this island than from the rest of the British Isles put together.”

But, as he was talking, an actor dressed in a jerkin and leather trousers, and a plastic crown, jumped up on a rock behind him and asked us what manner of quest we were on. He, also, was from English Heritage.

This conflict is typical of Tintagel - not least because it reminded me of a scene from Monty Python and the Holy Grail.

On the one hand, this is one of the most important historical sites from the early medieval period, demonstrating, through fragments of pottery from all over the Mediterranean, the sophistication and international connections of Cornwall’s elite at the time.

On the other hand, what brings the punters in is the legend of King Arthur, who has been associated with Tintagel since Geoffrey of Monmouth, writing in the twelfth century. I looked at the visitor’s book to see where visitors came from - Australia, Sweden, Italy, Germany, Kent - and someone, probably a German, had written “Arthur was not here!” Beneath it, someone else had scrawled, “Yes, he was!” I was at Tintagel to see the new footbridge, which opens on Sunday, joining the two parts of the castle for the first time in 500 years. Tintagel is built on a rocky outcrop into the Atlantic, originally joined to the mainland by a narrow isthmus - the Cornish name Din Tagell means “the Fortress of the Narrow Entrance” - but that landbridge collapsed into the sea at some point in the fifteenth century, separating the thirteenth century gatehouse from the principal castle buildings. Since then, the only way on to the island has been up a steep path from the valley floor which - while authentically narrow, especially when a tourist with a backpack or a child with a plastic Excalibur from Pendragon Gifts is coming the other way - has cut it off for many people, not least oldies.

But there’s no point making a place accessible if you take away the reasons you want to access the place: would this bridge spoil the Tintagel Castle that I love?

It might be a restoration of an historic feature, but would it detract from the breathtaking scenery of the Cornish coastline here, or damage the historical remains?

I am delighted to report it does neither. In fact it is an incredible, elegant structure, that genuinely adds to the scenery - and gives the visitor views from 190 feet above the gorge that noone has seen since at least 1540. It is even made from local materials: the walkway is covered with 40,000 slate tiles from Delabole quarry, less than three miles away.

And, because of the way it was designed, none of the archaeological remains have been touched. A suspension bridge, say, would have necessitated foundations in the most historically valuable and fragile parts of the site: this bridge is made up of two independent cantilevers anchored in the granite itself. In other words - and I am grateful to the designer, William Matthews, for putting it in layman’s terms for me - each half of the bridge is like a bookshelf, but with eight 50-foot-long anchors instead of screws and concrete instead of Rawlings plugs.

The two halves of the bridge do not meet - there is a gap of about an inch and a half between them - and if you think of this as a gap between two bookshelves, it is a perfect metaphor for Tintagel. On one shelf you have History, and on the other, rather better-stocked shelf, Arthurian Legend, and they do not touch.

Or do they? In 1113, some French canons visiting Cornwall caused a riot by suggesting that Arthur did not still live - “many men rushed into the church with arms”. And local passions are still strong, although now Cornish pride comes from the History bookshelf rather than the Arthuriana bookshelf.

A Cornish councillor - and bard of the Cornish gorsedd - has attacked English Heritage’s management of Tintagel as “Disneyfication” for the way it privileges Arthurian legend over the history of fifth-century Dunmonia.

But this is part of the history of Tintagel. “The island of Tyntagel” was bought by Richard Earl of Cornwall - Henry III’s younger brother - in 1233, and it remains the property of the Duke of Cornwall, Prince Charles, today. Richard built a castle on top of the remains from What We Must Not Call The Dark Ages, with no conceivable strategic purpose. It started falling down within a decade; a hundred years later, despite reconfiguration works, it was in ruins. (Other kings said he was daft to build a castle on a crumbling clifftop but he built it all the same, just to show them. It sank into the sea. So he built another one...)

The most likely reason for building an otherwise useless castle was to recreate the scene from Geoffrey of Monmouth’s account of Arthur’s conception, and so to associate him with the ancient rulers of Cornwall and with one of the most popular literary works of the time. It was, if you like, a thirteenth century Disneyland.

This is where the History bookshelf and the Legends of King Arthur bookshelf do in fact meet. And, indeed, this is the one of the few places where Geoffrey of Monmouth’s fanciful History of the Kings of Britain is backed up by archaeological evidence.

It might not be true that Gorlois Duke of Cornwall sent his wife to Tintagel to protect her from Uther Pendragon’s advances, or that Merlin provided Uther with a polyjuice potion which enabled him to enter disguised as Gorlois and sleep with her, conceiving King Arthur. But Geoffrey’s description of the “din tagell” rings true: “It is situated upon the sea, and on every side surrounded by it; and there is but one entrance into it, and that through a straight rock, which three men shall be able to defend against the whole power of the kingdom.”

The new bridge is three metres wide. That is the sort of narrow entrance that three men could defend against the whole power of the kingdom.

Standing on the bridge with two other visitors to prove it - of course that’s what we did - felt like bridging the gap between history and now. If you have any interest in history, myth or natural beauty, you should visit.

The US Mail keeps working in lockdown