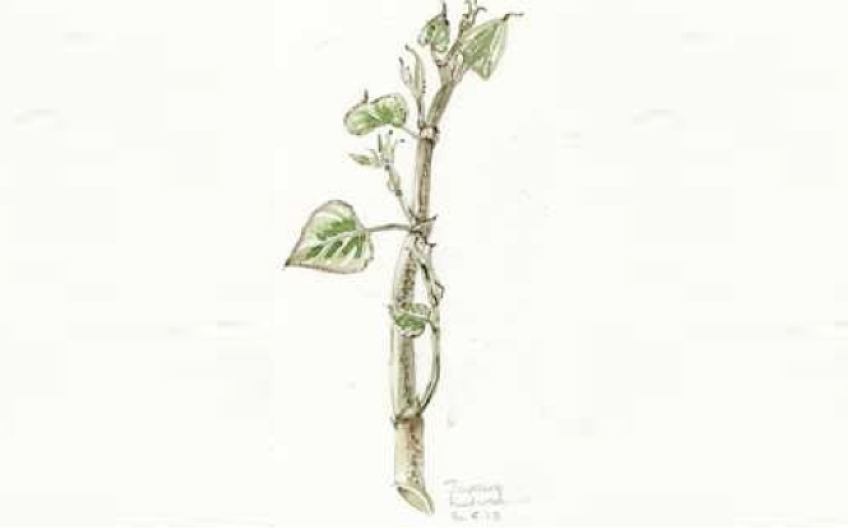 Know your enemy, so you can eat it. You’ll spot tall stands of bamboo-like Japanese knotweed naturalised along railways sidings and wasteland throughout Britain. Appreciated as a food crop in its land of origin, this statuesque beauty is classified as a proscribed weed in the UK – which is understandable since it has no predators or natural means of control and spreads itself exuberantly through both root and seed.

It was originally planted as pheasant cover on Victorian shooting estates, and once Fallopia japonica takes hold, it’s there to stay – as indeed it was round the edge of a walled garden in the Hebrides for which I was briefly responsible. However much I chopped and cropped and ate it, I failed to get rid of it.

The stalks are hollow, the juices slithery – an attribute much appreciated in oriental cooking – the flavour is sharp and lemony with a touch of bitterness, and the texture crunchy. When gathering it, avoid places that might have been sprayed with weedkiller – you can tell by the yellowing of the leaves, though this is only obvious after a day or two. Pick the stalks before flowering when only about a metre high by snapping off the stem only as far as your fingers meet no resistance.

To prepare for cooking, trim and strip off anything whiskery and hard, chop into finger-length pieces and blanch – scald in boiling water – or soak in salted water for an hour or two. The pieces can now be stored in an airtight box in the fridge for 3-4 days. When you’re ready to continue cooking, slice into boiling broth or a slow-cooked stew, or cook with mushrooms in a stir-fry and finish with oyster sauce.

To serve raw as a salad, slice finely, soak in salted water for an hour or two to leach out the bitterness, and toss with a soy-flavoured vinaigrette.

To prepare as a stir-fry, slice on the diagonal and blister in hot oil with garlic, chilli and ginger.