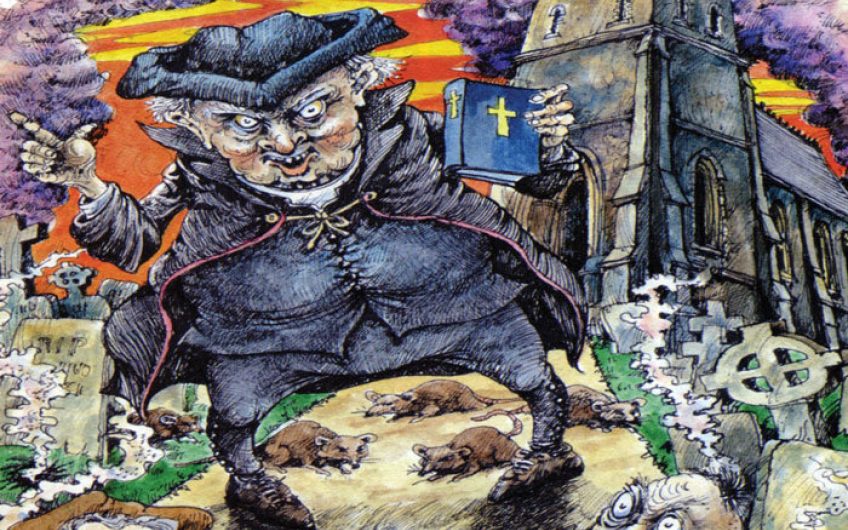 I was enjoying the lesson at my local church by the M4 about Shadrach, Meshach and Abed-nego being thrown into the fiery furnace and then rescued by a mysterious fourth figure, who is obviously an angel, when up jumped the vicar with a Judy Garland smile on his face. After a quick pout at his nails followed by some of those theatrical little dance steps they seem to teach at ecclesiastical college these days, he demolished, nay, deconstructed the whole wonderful story in a Cambridge sort of way. The ‘myth’ should not be seen as a piece of magic, oh no. It was, ho hum, political. Just a nice piece of spin-doctoring to make the Jews in Babylon feel good about themselves.

It almost made me yearn for the vicars of my Yorkshire childhood where God was in his heaven, which was ‘up there’, and anyone falling asleep was prodded with the churchwarden’s brass-headed pole; the sort of vicar that is every bit the measure of, and often far worse than, the sin he is combating.

My present priest offers counselling to single-parent families in a manner far different to when my mother lost her first child and became concerned that the baby had not had a proper funeral or been ‘churched’. She went to see the vicar in a terrible state and said she had been told the baby would be in purgatory until she herself died. ‘Nay,’ said the vicar. ‘You’ve got it wrong. Your baby will suffer purgatory until the last judgment.’

Yet that vicar was nothing compared to a man, now dead, called Halford who took over the parish further up the hill. He had been in the RAF and, having nothing else planned, when the war ended decided to give religion a go. Like all the really top-notch bad vicars his intention was to do good in the little village of Kimberworth outside Rotherham. At first he did nothing much out of the ordinary. Unlike a minister in Attercliffe he did not pick fights with his congregation to prove whose side God was on. Halford merely wore strange clothes: a black cloak affair of his own design and a three-cornered hat, which was sullenly disapproved of, as was asking parishioners for ten per cent of their income.

But his sermons were so unremittingly horrific that the congregation forgave him. Hard men who had come through two world wars were apt to stagger out of St Thomas’s a little pale. There was no fannying around and shaking hands and the vicar asking what colour you’d painted the kitchen. Everyone went down the semi-perpendicular hill thinking very seriously about Hell and how to avoid it.

The fiery furnace text was always popular in a steel-working area, but during the Cuban missile crisis Halford surpassed himself. He used the tale of Shadrach, Meshach and Abednego to talk about the effects of a heat flash from a nuclear weapon hitting Sheffield and what this might do to Kimberworth, Wentworth and Thorpe Hesley. Several people had to leave.

His message was that nuclear war, although unpleasant, was nothing compared to the wrath of God. In fact Mr Kennedy should not shy away from pressing the button. The ‘responsible folk’ under their kitchen tables reading the Bible and cheery MOD pamphlets about why not to look at the blast would have the angel sitting by them. ‘Unreliable types’, which included those in the pub, those who liked Communists, Malcolm Muggeridge, Elvis Presley, and the makers of ungodly radio programmes such as Hancock’s Half Hour, not to mention ‘louts’ in milk bars, could expect to run down Kimberworth Hill faster than a fried egg on hot dripping.

Later, drunk on his own popularity, the preacher fell from grace. In the mid-Sixties, as an ill-judged concession to the times probably brought on by one too many conferences on the New Testament, he decided to turn the churchyard into a nature reserve. He banned the old men and their terriers who sat on the churchyard benches. The men were the backbone of his congregation. The terriers kept down the rats in an area with the highest congregation of rodents in England. Soon the thickets were overrun by a rat population of biblical proportions. There were large, evil-smelling holes in graves, from which we used to try to ignite the gases.

Shunned, Halford took up with a local spinster who owned a spoil heap. Many nights he was to be found in her farmhouse bandaging her phlebitis. He then got himself national publicity by turning away a funeral which had not paid the arbitrary fee he imposed to employ a rat catcher.

The worst priest I have ever known was also a bad man trying to be godly. An ex-South African Air Force officer, he was loosely part of the Verbo Divino Catholic sect in the little town of Hohenau in Paraguay.

One day when I arrived in the town a hymn was in progress in the small church in this mainly German area. Then there was a sharp crack like wood splitting. Next a man was being carried from the church swearing. Father Wolfgang filled the doorway with his hands clasped in front of him and an expression of tender regret on his face in the manner of priests all over the world. Except Wolfgang’s hands contained a smoking Colt 45.

I learned later that he had shot the man – ‘only in the leg’ – for talking in church. Naturally Wolfgang, who did not have a symbolic bone in his body, believed Christ paid for all our sins on the cross which, like the fiery furnace, was as real as his warm gun. Very soon Wolfgang himself expected to be searching for the exit and the angel. Is this more reassuring than my present C of E atheist? Well, as my grandad used to say, ‘If that’s the sort of help God employs then there’s hope for the rest of us.’