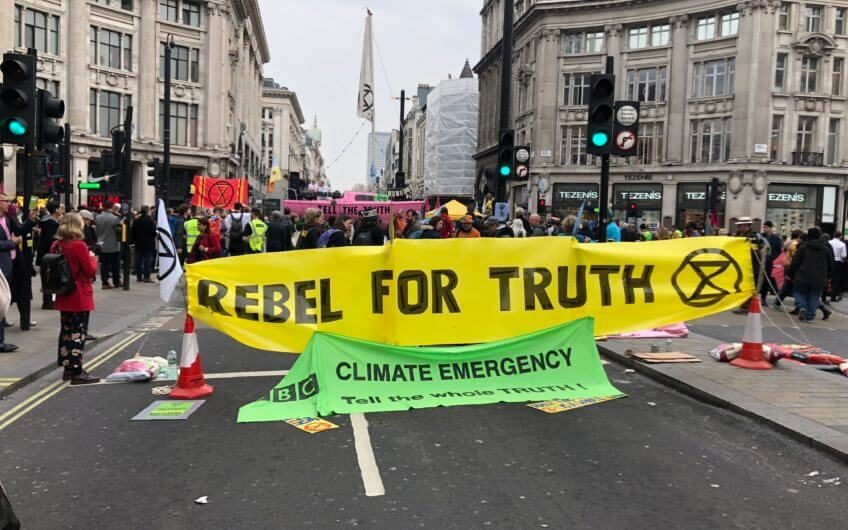 Yesterday, I spent the afternoon at the Extinction Rebellion protest at Oxford Circus. I was desperate to find out the significance of the pink boat. Amid the loudspeakers, the tents and the occasional arrest, I got to speak to some of the protesters.

It was mid-afternoon when I came across the small group. They were in the shadow of the now famous pink boat-cum-DJ-booth. They were three young women at various stages of their twenties.

The oldest and most assertive of the three, Viola, a filmmaker specialising in fiction, from Poland, dressed in a red t-shirt, rucksack and what looked like hiking gear, had been on the protest since Monday. She spoke of the ‘incredible’ people she’d met, the ‘vibe’ and the ‘beautiful moments’.

It goes without saying that there is a strong sense of that much overused word – community – at protests, but her follow-up was intriguing. ‘Even if you don’t believe in climate change, we all believe in community’.

And though many Londoners are infuriated by the standstill, a good third of them, along with the rest of the country, agree with the principle of the protest. Though there are a hardcore of overnight protesters, the non-protesters around Oxford Circus get sucked into the affair, living vicariously through the protesters.

Queries about the disruption to Londoner’s lives were dismissed by both girls. Viola with the point that the purpose of the rebellion was ‘to disturb’. And Nadi said that people ‘being scared of being 10 minutes late to work is not a good situation for them to be in, to be a slave to society’, her ‘worst nightmare’. Both quite frustrating answers, to say the least.

The stated reason for the protest is the 12 year climate emergency. (The need to keep global warming below a maximum of 1.5C to prevent climate catastrophe and the sixth mass extinction event). I say the stated reason because when you scratch the surface of the protest, it is really about systems.

'System change, not climate change' is the rallying call. Nadi, an artist and party host, sporting headwear sprouting blue and yellow dreadlocks, made this clear. ‘Small humans, who don’t have any power, can’t do too much… people in power must be changed’.

This is very much the core of the movement. MPs and governments are too fallible; enthralled by party, corporate interests; they aren’t representative of the people and are out of touch. In some of their more alarming literature, Extinction Rebellion announces that they ‘declare the bonds of the social contract to be null and void…’ and that they as citizens must redress government failure to act appropriately. Extinction Rebellion suggest a citizen assembly so that the people and not the politicians have the power.

Sound familiar? Out of touch government, going to the people… The subject may be different, but the anti-parliamentary sentiment is much the same as that around Brexit.

That is what the protest is. Another dispiriting disavowal of our politicians.