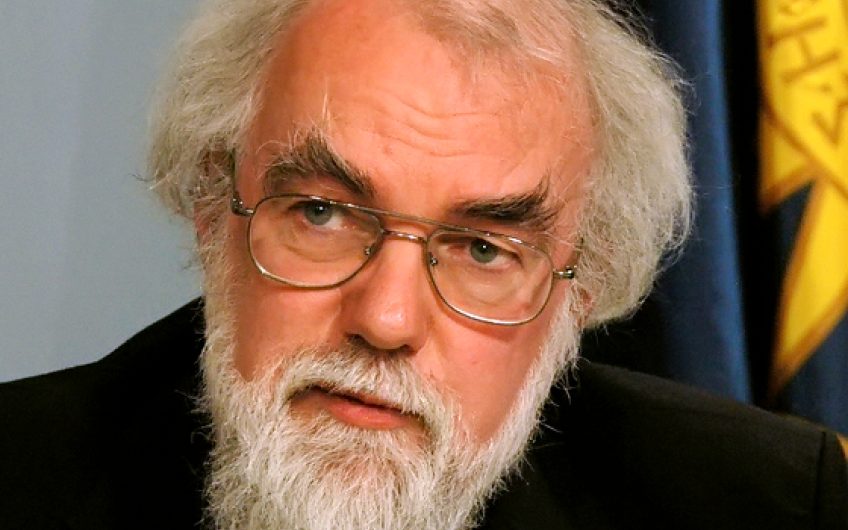 It was Christmas Eve in Cambridge. I was sitting outside my favourite wine bar, quite near Magdalene College, sipping a warming glass of mulled wine, when what I took to be a shockingly unkempt tramp, dressed in a filthy old brown raincoat, clutching a large plastic bag, passed just by me.

The founder-editor of this magazine, Richard Ingrams, was always urging me to get an interview with Rowan, the bearded leftie, or ‘Beardie’, as Richard called him. But what with him being an Archbishop and me a down-and-out, it proved difficult.

Also, I was feeling a bit guilty about what I wrote about him in The Oldie, that ‘he had the mark of the fence firmly imprinted in his bottom’, a reference to his typical academic’s tendency to see every point of view and the consequent inability to make up his mind about anything and everything; eg gay marriage and priests. That does not make for strong leadership.

However, in Cambridge, it would be easier, I thought…

I pursued Beardie to the railway station early one morning but failed to catch him before he boarded his train. I caught him at the ATM cash machine on another early morning, bemoaning the fact that, like me, he had hardly any money left. How come? Perhaps because he often gave to beggars and Big Issue-sellers on the streets of Cambridge; I frequently saw him doing this; a very generous – as well as humble – man. I often saw him at Mass at Little St Mary and St Giles (next to Magdalen) but was reluctant to interrupt his devotions.

He often says the early Eucharist at St Benet’s, the oldest church in Cambridge – so I started going along there. He said it beautifully with a truly enchanting voice and manner. It was there, at St. Benet’s, after the Mass, that I finally nabbed him...

I introduced myself as a former Press Secretary to his great predecessor Michael Ramsey, once vicar at St Benet’s. Rowan’s face lit up.

‘Oh yes, St. Benet’s was Michael’s church of course. How did you find him?’

‘It was tricky introducing him to journalists, particularly lady ones because he had no small talk,’ I said, ‘He would discuss the Theory of the Atonement till the cows came home, but the names of the flowers in Lambeth Palace garden eluded him. No small talk at all.’

‘How do you find life at Magdalene?’

‘Very nice,’ he said. ‘I don’t interfere too much with the other dons.’

Rowan tactfully refused to comment on his successor, Justin Welby, the businessman-in-a-dog-collar.

‘But it must be a relief no longer to have the responsibilities of an Archbishop.’

‘Quite so,’ he said, ‘You need a very thick skin. I used to get it from all sides, particularly on gay matters and Sharia law.’

‘I admire your writings in the New Statesman; very well thought out,’ I said creepily.

‘Well, being back in Academia gives me a chance to think things through.’

‘Do you still find it difficult to make up your mind about anything and everything?’ I arrogantly asked.

‘Yes, but I do not apologise for that.’

Rowan drifted off into the early morning mist. I wanted to tell him to get his hair cut but I lacked the courage. I was tempted to ask him if he really believed in God.